Stay Connected:
A new survey by B.E. Smith sheds light on how search firms are approaching growing challenges in recruitment, retention, engagement and leadership development. Among the findings, businesses seem to be seeking greater agility. 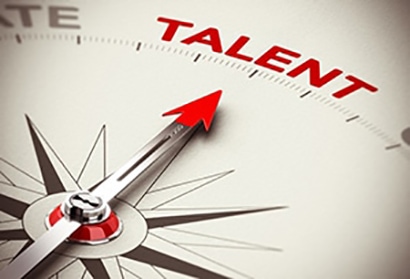 January 29, 2019 – In today’s challenging environment, effective workforce management is a significant asset in all lines of business. It’s critical to have executive talent that not only has the right competencies but who can perform at the highest levels and employ strong strategies. Developing and nurturing such leaders is now seen as more vital than ever.

To establish baselines, the survey aimed to take the pulse of organizational priorities in strengthening leadership ranks. A range of efforts were being pursued, the report said, led by near-universal commitment to “developing leaders internally.” This finding was consistent with results from this year’s B.E. Smith Leadership Intelligence Survey.

Efforts like removing ineffective leaders and recruiting experienced ones also showed strength in the new survey, with 70 percent of those surveyed saying they utilized such approaches. These efforts suggest organizations may be quickening the pace of management changes in seeking greater agility in responding to industry trends and as margins for strategic error shrink, said B.E. Smith.

One-quarter of executives surveyed said they would strengthen leadership by employing interim leaders, while another one-third planned to recruit leaders from outside of the healthcare industry. Previous surveys have named hospitality and finance as the most desirable external industries from which to source appropriate talent. 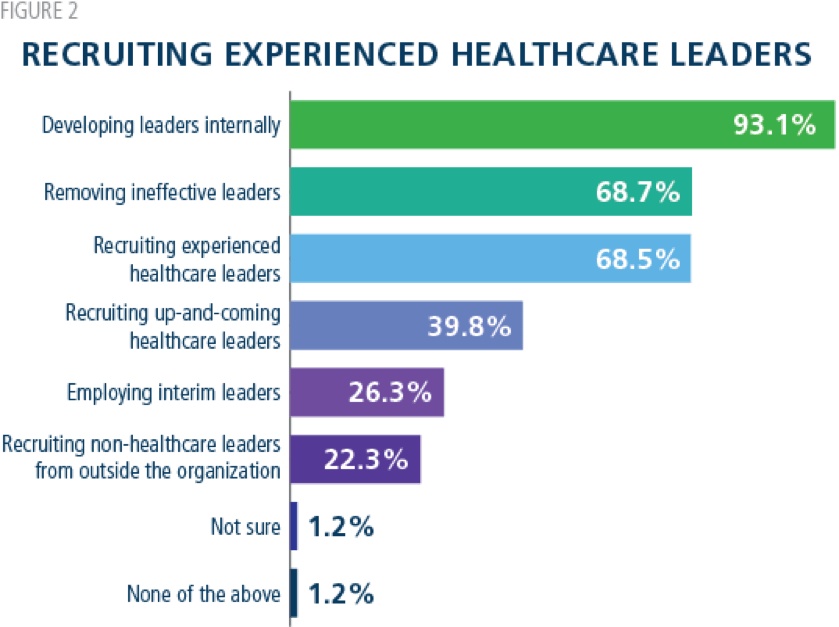 Leadership development is a cornerstone activity in building the right executive cadre, so getting a strong read on status in this important area is valuable, said B.E. Smith.

The good news portrayed by the Workforce Intelligence Survey was that 71 percent of organizations have a development program in place, and 59 percent of those that lack such a program do expect to implement one. Two-thirds of respondents said they are satisfied with their leadership development programs (though only 14 percent are highly satisfied). Individual comments from those not satisfied with their programs, said the report, spotlighted limitations that all programs should combat:

The survey also delved into which development initiatives are most utilized. The top four program components were: mentoring (83 percent), executive coaching (74 percent), organizational planning (71 percent), and formal skills assessment (64 percent). Given this lineup, it is not surprising that the most desired programmatic additions and enhancements were assessments and planning. The survey results indicated that organizations continue to move in the direction of more organized, data-driven and strategic approaches to building leadership.

More structured leadership development programs provide organizations with many advantages, said the B.E. Smith report. As a result, a growing number of organizations are turning to outside expertise to assist in developing and implementing a program. According to the survey, 59 percent of respondents said they are working or have worked with an independent consulting firm

An Insider’s Guide to Coaching & Leadership Development
For Hilary Pearl, founding partner of Greenwich, CT-based Pearl Associates, improving performance through executive coaching and organizational consulting resides at the center of her work. Executive coaching is now a $1 billion business sector, centered around the notion that all employees can improve their performance quickly if coached properly.

Still, other executives in the survey expressed a desire to find consultants able to design “a fully integrated program that fits our culture, with content designed specifically for our needs.” Said B.E. Smith: The best consulting firms customize the program by constructing plans and pathways that reflect both individual variations and the unique culture of each organization.”

Few things engender greater management disruption than turnover. The B.E. Smith survey showed that current turnover generally ranges between five percent and 20 percent, with 24 percent saying their rate is between 15 and 20 percent.

Probably the most critical information to retention initiatives is understanding why executives leave or remain within an organization. The Workforce Leadership Survey found that approximately 40 percent of leaders listed retirement as the main cause of departures. As the wave of Baby Boomers reaching retirement age continues to grow, so will this trend, B.E. Smith said.

The survey found that the secondary reason for turnover within executive leadership was performance issues. Further investment in leadership development and mentoring can ameliorate weaker performance before it becomes an exit situation, said the report. Additionally, “poor cultural fit” was cited as the third most mentioned reason for departures. “Organizations can reduce the risk of poor cultural fit by utilizing assessment tools as part of the recruiting process,” said B.E. Smith. “Assessment tools provide deeper insights into candidates, reducing the risks of a mismatch.”

Equally important in this area is understanding what motivates people. According to the survey, the two primary motivators are career advancement and colleagues. This also aligns with B.E. Smith’s 2018 Leadership Intelligence Survey, which found that nearly one-third of leaders believe they must depart their current organization to advance their careers. The results of both surveys showed that “organizations can increase engagement and reduce the risks of turnover by promoting strong team interaction, establishing a positive management environment and developing meaningful paths for professional growth.”

According to the B.E. Smith survey, just under half of respondents said they anticipate hiring an executive this year. And while hiring activity was on the rise, confidence in an organization’s recruitment capability seemed to be questionable. Only 27 percent of executives who took the survey said they were extremely or very confident that their organization would be able to identify and recruit the right talent to fill executive positions.

The Workforce Intelligence Survey also took a snapshot of the various recruiting methods being deployed across organizations. The primary recruitment methods are website and referrals, followed by healthcare job boards, association websites and industry sites. Half of the executives in the survey said they were satisfied with the overall candidate response rates. The finding suggested both room for improvement and the limitations of reliance on electronic vehicles such as postings.

One of the most powerful recruitment strategies, said the report, is tapping the market of “passive candidates,” or those professionals not proactively seeking a new career opportunity. Executive search firms bring specific expertise in targeting this group of executives who often possess a strong match with a position’s requirements. B.E. Smith’s previous Leadership Intelligence Survey identified the potential magnitude of this candidate pool as significant. In fact, the survey found that 75 percent of leaders who said they had no plans to change their job would still consider a new opportunity if presented.

With Skilled Applicants in Short Supply, AI Emerges to Lure Passive Candidates
With unemployment down and skilled workers hard to find, artificial intelligence is proving itself an invaluable ally to hiring managers. A new report by ENGAGE Talent reveals how AI dives deeper into the talent pool.

Based on the data, it is not surprising that organizations are taking a more active role recruiting these passive candidates. The Workforce Intelligence Survey, in fact, found that nearly half of organizations are now increasing their recruitment efforts on passive candidates. One approach to reaching this group of professionals is their referrals. Seventy-five percent of the executives surveyed said that referrals are the priority method for accessing passive candidates. Another 40 percent of respondents said that social media also plays a larger role in identifying and cultivating this talent cohort.

According to the survey, behavioral-based interviews (74 percent) and behavioral-based assessments (61 percent) are the primary methods used by organizations during the hiring process. The top five were rounded out by peer reviews (54 percent), personality testing (42 percent) and skills testing (18 percent). This ranking indicates that the hiring process is shifting beyond simple skill-set assessment. Organizations are viewing behavioral characteristics and emotional intelligence as critical success factors for current and future leadership success.