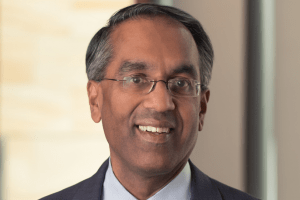 July 10, 2017 – Heidrick & Struggles has named Krishnan Rajagopalan as its new president and CEO. Mr. Rajagopalan, who has served as acting CEO since Tracy Wolstencroft took a medical leave of absence in April, will also become board member.

Mr. Wolstencroft, who is on the mend from what is described as a benign lung condition, has been named chairman of the board. He succeeds Richard Beattie, who remains lead independent director of the board. Although Mr. Wolstencroft’s health is improving, the company said, he stepped down because he needs more time to fully recover.

“We are thankful that Tracy’s recovery is progressing well,” said Mr. Beattie, senior chairman at Simpson Thacher & Bartlett, a New York law firm. “While we are disappointed that he will not return as our CEO, we understand and respect his decision. Krishnan has demonstrated tremendous leadership and the time is right for him to succeed to the president and CEO role.”

Before coming to Heidrick, Mr. Rajagopalan was a vice president and partner with A.T. Kearney Consulting. His responsibilities there included strategy, operations / procurement and e-business across a range of industries, including technology services, hi-tech and manufacturing.

Previously, Mr. Rajagopalan was a consultant with Price Waterhouse in its strategic management consulting group. Before going into executive search, he worked for Harris Corporation as a lead engineer in the commercial satellite communications arena.

Mr. Wolstencroft was named Heidrick’s CEO three years ago. Before that, he had been with Goldman Sachs for 25 years. Under his watch, the firm expanded into more diversified services like corporate culture shaping and leadership development. Revenues also grew by 17 percent.

In June, Heidrick appointed Andrew LeSueur as head of leadership consulting in the Americas. He also continues to support his executive search clients and the industrial and supply chain practices as he transitions into his new role. Mr. LeSueur joined Heidrick & Struggles in 2015 from McKinsey, where he was partner in the operations practice.

In May, the Chicago-based firm named Elizabeth Simpson as head of financial services in New York. Expanding on her duties, Ms. Simpson is now responsible for driving Heidrick’s regional business development, collaborating across the organization’s complementary lines of business and mentoring and developing talent internally.

Heidrick recently named Ian Johnston as managing partner for its culture shaping business for Europe, the Middle East and Africa. Mr. Johnston has been a senior leader of culture shaping in the European region for the past 15 years, serving most recently as partner. He is known for enabling CEOs to lead with vitality, vision and clear purpose.