Menu
View our Events
Stay Connected:
This morning’s jobs figures represent the fourth consecutive week that new jobless claims came in below the psychologically important one million level, but it remains high on a historical basis. Let’s take a look at the just released numbers from the Department of Labor. 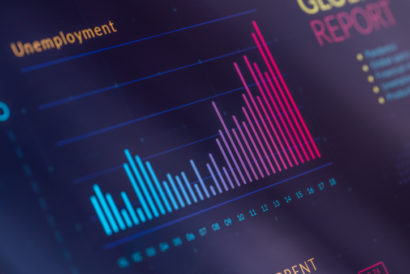 September 24, 2020 – The Labor Department reported this morning that 870,000 more Americans filed new claims for state unemployment benefits last week. Economists polled by Dow Jones expected first-time claims to come in at 850,000, down slightly from the 860,000 claims reported for the previous week. The latest figures portend an unstable and volatile job market.

“We’re continuing to see healing in the labor market, but the pace by which we’re seeing recovery is slowing,” said Kathy Bostjancic, an economist at Oxford Economics.

“The current picture suggests that growth has slowed sharply in the past three months, and that the labor market is stalling again in the face of rising infections and the sudden ending of federal government support to unemployed people,” said Ian Shepherdson, chief economist for Pantheon Macroeconomics.

“Claims, arguably the most important high frequency data point currently, missed expectations and moved up,” Dennis DeBusschere, an analyst at Evercore ISI, said in a note.

Thursday’s data comes as U.S. lawmakers struggle to move forward with a new fiscal stimulus package, something economists and the Federal Reserve argue is needed for the economic recovery to continue.

On Wednesday, Fed chairman Jerome Powell called for more fiscal support, telling lawmakers: “We’ve come a long way pretty quickly, and that’s great. But there’s a long way to go. So, I just would say we need to stay with it, all of us. The recovery will go faster if there’s support coming both from Congress and from the Fed.”

Six months into the pandemic, the sluggish rate of recovery has led to a spike in corporate discussions about permanent job cuts, with nearly half of businesses who have already announced furloughs or layoffs saying they expect to make further adjustments in the next 12 months, according to a recent survey by Randstad RiseSmart, an outsourcing firm.

“Although the pace of recovery has been gradual, there is evidence that the U.S. economy is rebounding,” Mr. Davenport said. “The latest Bureau of Labor Statistics jobs report found the unemployment rate decreased to 10.2 percent in August, and more businesses have been given the green light to reopen, leading to an uptick in open positions and an increase in consumer spending. Some industries have been impacted more than others and may either take longer to recover or will not fully recover. For example, even before COVID-19, the brick-and-mortar retail sector was already facing projections of massive job losses. The current environment has accelerated that trend.”

“The travel and hospitality industry is likely to recover at a slower pace. Just last week, American Airlines announced major layoffs, as airline passenger volumes aren’t projected to return to 2019 levels until 2023 or 2024,” said Mr. Davenport. “While it isn’t clear when the U.S. economy will fully recover, an important indicator will be the ability for states across the country to keep infection rates low, giving employers the confidence to reopen offices and ramp up hiring.”