Stay Connected:
Dan Davenport, president and general manager of Randstad RiseSmart, offers up an exclusive forecast and predictions for the economy — and how a likely second-wave lockdown will impact unemployment and hiring. It's an exclusive end-of-summer look ahead. 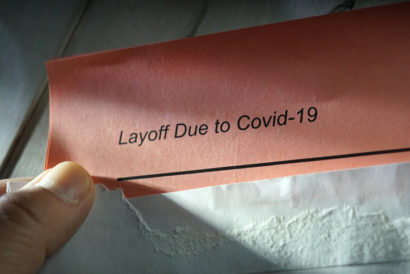 August 31, 2020 – Nearly half of U.S. employers who have opted to furlough or lay off staff as a result of the ongoing COVID-19 pandemic are considering making additional workforce reductions in the next 12 months, according a new survey released by Randstad RiseSmart. The survey was conducted online by a third-party survey provider and respondents included more than 250 human resources professionals at companies of all sizes across more than 20 industries.

Impact of the Pandemic

Overall, one in five employers surveyed have either laid off (9.3 percent) or furloughed (11.3 percent) workers due to the impact of the pandemic, and nearly half (47.2 percent) have not made any new hires since COVID-19 was declared a national emergency.

Of the survey respondents who have laid off or furloughed employees, the top three ways these changes have been communicated include: in-person or on-site notifications (27.9 percent), individual phone calls (24.8 percent) and email (22.4 percent). Despite the rise in popularity of video conferencing more broadly, less than eight percent (7.5 percent) of respondents used a one-on-one video call to conduct separations.

The survey also revealed that organizations have room for improvement when it comes to how they treat separated employees during times of crisis. More than half (54 percent) of the employers surveyed did not take any actions to avoid conducting layoffs or furloughs, such as internal redeployment. Fewer than four percent of employers (3.7 percent) have redeployed or reassigned employees in response to the COVID-19 pandemic.

“While the financial downturn caused by this pandemic has made workforce shifts unavoidable for many businesses, when employers do right by their current and departing employees, it is beneficial for the organization’s reputation and the broader economy,” Mr. Davenport said. “During these uncertain times, workers need assistance and support more than ever. It’s important for companies that are planning to conduct further workforce restructuring to consider options such as internal redeployment and outplacement services. Not only will doing so help employees grow in their careers, but it will have a positive, long-lasting impact on an organization’s brand and bottom line.”

Mr. Davenport co-founded the firm with Sanjay Sathe in 2007. He built RiseSmart’s service delivery organization and managed all operations in the U.S., Canada, and India. After the company was sold to Randstad Holdings in 2015, Mr. Davenport led the launch of RiseSmart in Europe and Asia Pacific, and the creation of a global network, RiNGS – establishing delivery capability in over 80 countries.

Mr. Davenport recently sat down Hunt Scanlon Media to offer up an exclusive forecast and predictions for the economy—and how a likely second-wave lock down will impact unemployment and hiring.

Dan, when do you expect to see a recovery for the U.S. economy?

Although the pace of recovery has been gradual, there is evidence that the U.S. economy is rebounding. The latest Bureau of Labor Statistics jobs report found the unemployment rate decreased to 10.2 percent in August, and more businesses have been given the green light to reopen, leading to an uptick in open positions and an increase in consumer spending. Some industries have been impacted more than others and may either take longer to recover or will not fully recover. For example, even before COVID-19, the brick-and-mortar retail sector was already facing projections of massive job losses. The current environment has accelerated that trend. The travel and hospitality industry is likely to recover at a slower pace. Just this week, American Airlines announced major layoffs, as airline passenger volumes aren’t projected to return to 2019 levels until 2023 or 2024. While it isn’t clear when the U.S. economy will fully recover, an important indicator will be the ability for states across the country to keep infection rates low, giving employers the confidence to reopen offices and ramp up hiring.

“A resurgence of the virus has the potential to significantly delay our nation’s economic recovery and a second round of lockdown measures could lead some businesses to permanently shut down operations.”

What would a potential second lockdown do to the economy and what can businesses do to prepare for this?

A resurgence of the virus has the potential to significantly delay our nation’s economic recovery and a second round of lockdown measures could lead some businesses to permanently shut down operations. Companies should prepare for the possibility of a second lockdown by developing strategies to make their workforce more agile to both avoid layoffs and address evolving business needs. RiseSmart’s recent employer survey found that fewer than four percent of companies redeployed or reassigned workers to avoid layoffs in response to the pandemic, while 54 percent did not take any action to avoid conducting layoffs or furloughs. Going forward businesses should make every effort to reskill and redeploy their talent internally in lieu of further staff reductions. Beyond the obvious benefit to the worker who is retained rather than let go, there is tremendous financial incentive for companies that are able to successfully redeploy rather than lay off employees. Organizations that reskill and reassign talent can retain valuable institutional knowledge, strengthen employee morale, enhance their employer brand, reduce unemployment taxes and severance costs, and save on recruiting costs when those positions ultimately need to be restaffed.

What do you see in terms of companies hiring for the remainder of 2020?

Our survey found that 47 percent of employers have not brought on any new hires since March 13 – when COVID-19 was first declared a national emergency – and 47 percent of the respondents who have already laid off workers said they are likely to make further cuts in the next 12 months. Overall, hiring for the remainder of 2020 will likely continue to remain slow given that many businesses are taking precautions during this period of economic uncertainty. However, one encouraging sign we’ve been seeing is companies setting up public talent directories to promote the availability of skilled talent that their organization has had to lay off. This trend contrasts previous business practices in which companies were hesitant to highlight talent impacted by layoffs due to concerns that departing employees would end up with competitors. During the economic downturn fueled by the pandemic, we’ve seen organizations not only be more transparent about their layoffs, but many businesses are going the extra mile to help separated employees find their next opportunity.