Menu
View our Events
Stay Connected:
In choosing the Santa Barbara, CA-based search firm to find its next president, GWU’s board of trustees cited Education Executives’ commitment to the university, its strong experience, as well as its team’s deep academic backgrounds. The recruiting firm is expected to work closely with the school’s presidential search committee. 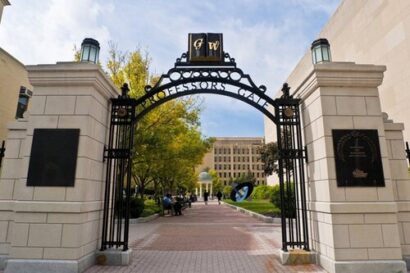 June 30, 2022 – Leadership roles in today’s colleges and universities have become increasingly demanding and complex. Senior academic leaders must balance the needs of numerous constituents—needs that require a cross section of skills far beyond the traditional set of scholarly and research accomplishments. Those who lead today’s universities are CEOs of publicly scrutinized institutions with requirements to fundraise, balance budgets, and satisfy numerous demands with scant resources, according to executive recruiters. They compete for students, for faculty and staff members, and for rankings. Perhaps unsurprisingly, the average length of tenure in these roles is decreasing, and there is a growing need to attract and retain quality talent that can adjust to the unique challenges and aspirations of each educational institution.

The George Washington University (GWU) board of trustees recently selected Santa Barbara, CA-based executive search firm Education Executives to assist the university’s search for its 19th president. The firm’s prior presidential searches include those for Johns Hopkins University, MIT, Rice University, and Emory University, among others. The search team is led by Ilene H. Nagel, president and founder, and joined by John Simon and Charles Kaler.

The search firm is charged with assisting the presidential search committee in organizing the search process and adhering to its timetable while maintaining flexibility in the process and timetable to secure the best possible candidates.

After planning and facilitating multiple opportunities for community input and reviewing the future priorities of the board of trustees, the firm will assist in developing a compelling position profile.

Education Executives will also help in identifying a highly qualified and diverse pool of potential candidates by finding people based on previous assignments and an extensive network of those able to make sound referrals. In addition, they will be expected to seek nominations from the university community and friends of the university, and to employ innovative strategies to bring targeted individuals into the process.

Isaacson, Miller Called in by University of Michigan to Find 15th President

The Boston-based search firm is charged with nothing less than finding a leader for one of the most highly regarded public research universities anywhere. Insights from the university community will play a critical part in finding the right individual for the role.

Further, Education Executives will manage nominations and applications, including establishing a confidential electronic portal for the committee’s use. They will also be organizing and participating in interviews of qualified and appropriately vetted candidates, including providing, when requested, detailed summaries of a candidate’s qualifications, strengths and weaknesses, as well as assisting in evaluation of candidates on request. Lastly, the firm is responsible for conducting thorough personal and professional reference checks.

“Because of the extremely competitive market for high-quality presidential candidates, the committee is charged with being innovative and flexible in finding and attracting outstanding talent,” said Grace Speights, chair of the board of trustees. “Additionally, I have asked the committee members to join the trustees, the faculty senate executive committee, and faculty consultative committee at the board of trustees retreat this summer to begin discussions on the desired experience and characteristics of the next president.”

“The presidential search committee, through its chair, will communicate with the university community at key points in the process through a dedicated website,” said Ms. Speights. “We will also seek the perspectives of community members and stakeholders about our aspirations and the leadership qualities needed to realize those aspirations. We also urge the GWU community to share with the committee, through our dedicated website, the names of individuals who you believe should be considered as candidates to serve as the next GWU president. This feedback is critical to our success, and we look forward to sharing more details on engagement opportunities in the coming months.”

“I want to thank president Mark S. Wrighton who has provided us the time to conduct a thorough search,” said Ms. Speights. “He has consistently stated that his priority is to position GWU for the next president and for increased prominence in our third century.”

George Washington University is a private federally chartered research university in Washington, D.C. Chartered in 1821 by the United States Congress, GWU is the largest institution of higher education in the District of Columbia. The university is highly ranked and regarded in the U.S. for its international affairs program at the Elliott School of International Affairs. President George Washington advocated for the establishment of a national university in the U.S. capital in his first state of the union address in 1790 and continued to promote this idea throughout his career and until his death

Education Executives specializes in the identification, recruitment, and mentorship of senior leaders for comprehensive research universities, academic medical centers, and scientific entities. Ms. Nagel is founder and president and specializes in searches for AAU and research university presidents, provosts, and deans, as well as senior leaders of distinguished scientific organizations. In addition, she has led the search for the VP for health sciences and/or dean of medicine for Hopkins, Stanford, UCLA, the University of Michigan, Harvard, Emory, UVA, Brown, UT Southwestern, UAB, Stony Brook, SUNY Buffalo, Indiana University, among others, as well as a variety of chair searches for academic medical centers, and the search for the CEO of the hospital systems for Stanford and for UCLA.

In 2014, Dr. Simon was named as president of Lehigh University. He served as Lehigh’s 14th president until 2021. During his tenure as president, he raised the university’s national profile, strengthened and grew its research infrastructure, expanded its global programs, and built on the university’s legacy of success in research, teaching, and service. He currently serves as a consultant with Education Executives.

Mr. Kaler is also a consultant with Education Executives and focuses on the recruitment of senior academic leaders for institutions of higher education and academic medical centers across the U.S. and Canada. He works closely with colleges and universities to advise executive teams and boards about their most pressing leadership challenges.