Menu
View our Events
Stay Connected:
Led by Ireland, most countries have showed improvement in advancing gender equity on major corporate boards over the last year, says a new report from BoardEx. The U.S., which gained 10 percentage points since 2014, ranked 16th for female representation by board. 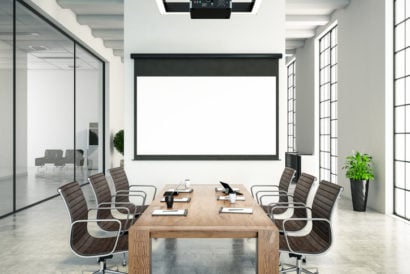 August 10, 2021 – The representation of women in corporate leadership is coming under increasing scrutiny as stakeholders demand a greater degree of commitment to progress on gender equity. In a new report, BoardEx, a leading provider of executive intelligence and relationship mapping solutions, describes 2020 as a year of progress.

Using 26 indices to measure progress at advancing gender equity on the boards of major corporations, the Global Gender Balance Report 2021 second edition found that last year Ireland saw the biggest gain of any of the 26 countries studied, with a 4.7 percentage point increase from 2019. Ireland’s percentage of women on ISEQ-20 boards sits at 31 percent.

“Another striking development was Japan’s lifting itself from bottom place for the first time since the rankings began in 2014,” said BoardEx. “With a board gender balance of 14 percent (nine percent in 2019 – a rise of 5.1 percentage points), Japan moves up three places, ahead of Brazil, Russia and Hong Kong.” 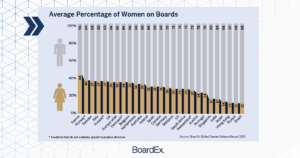 The BoardEx report also found that only 4.4 percent of the organizations from the study have more than 50 percent female participation on the board. “The decisions that determine female participation at board level are, of course, made at the corporate-management level, influenced by legislated ratios or quotas,” said the study. “In 2020, of the 1,419 organizations in the indices, no fewer than 23 (1.6 percent of the total) had female board-participation rates in excess of 50 percent (40 had a rate of exactly 50 percent – achieving exact gender balance – with a further 37 showing rates of between 45 percent and 50 percent). This means that 63 (4.4 percent of the total) were at or above 50 percent female representation; 100 (7 percent) were at or above 45 percent.”

France, the top-ranking major national index country for gender balance, joined the U.S. in having five corporations in this list of 23 organizations. Norway and Sweden each had three organizations on the list. The U.K. had two. And the balance was made up by Belgium, Denmark, Ireland, Malaysia and Australia.

What is also noticeable about the top 23 corporations for female participation is the spread of sectors from which they are drawn, said the BoardEx report. These range from media to financial services, retail, construction, chemicals and automotive. “This variety suggests there is no barrier to achieving greater gender balance in any sector,” said the study. “The table also shows that many (but by no means all) of these high gender-participation ratios are also accompanied by much lower leadership-team ratios.”

Quotas and government pressure have helped progress in a number of countries. Several nations have introduced mandated levels for female board representation for their major indices. The mandated levels range from 40 percent in France, Norway and Spain to just one board seat in India. Most countries (54 percent) still have no mandatory or voluntary quota for female board representation.

Related: The State of Gender Equity on Boards

There is a common perception that mandated female board representation has been
instrumental in making progress on improving gender balance. The average female participation level for mandated representation stood at 31 percent in 2020, up from 30 percent a year earlier. For non-mandated countries, it was 27 percent and 24 percent, respectively.

“Both groups of countries progressed further in 2020, with the non-mandated countries advancing the most,” said the BoardEx report. “The fact that countries with mandated female representation have higher ratios is often cited as evidence of the value of these programs. Indeed, it can be argued that such regulation is an essential factor in improving corporate board performance. In addition, the presence of these rules in one jurisdiction can also influence other countries, particularly if they are seen as evidence of the regulatory direction of travel.”

BoardEx noted, however, that mandating a female board representation level and achieving it are two different things. “Spain, for instance, mandates a level of 40 percent but only achieves a ratio of 31 percent,” said the study. “Continuing to progress towards achieving global gender equity in business leadership is clearly a matter not just for legislators but for those who instill and uphold the corporate cultures that govern internal mindsets.”

“Although the U.S. has no nationally mandated female board representation levels, several either exist or are being planned at state level,” said BoardEx. “The most prominent of these is in California, which covers not only California-incorporated firms but also corporations that ‘have principal executive offices located in California,’ no matter where they are incorporated.”

Founded in 1999, and with offices in New York, London and Chennai, BoardEx is a global data company specializing in relationship mapping and intelligence. BoardEx is a wholly owned subsidiary of Euromoney PLC. BoardEx helps private and public organizations discover valuable and influential executive connections critical to their success. It is a comprehensive, continuously growing global leadership database covering board and non-board members, C-suite executives, senior leaders and professional advisers. BoardEx contains more than 2 million profiles of public, private and not-for-profit organizations and the 1.5 million people who work for them.