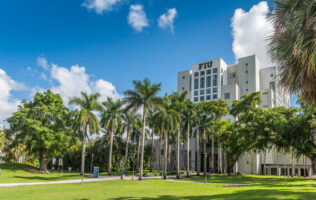 March 24, 2022 – The Florida International University (FIU) board of trustees’ governance committee recently interviewed executive search firms and selected R. William Funk & Associates to assist with the search for its sixth president. Mark Rosenberg abruptly resigned from the role in January in the wake of accusations of misconduct toward a staffer. Kenneth A. Jessell, the university’s chief financial officer and senior vice president for finance and administration, has been serving as interim president since Dr. Rosenberg stepped down.

Dallas-based R. William Funk & Associates has extensive experience recruiting for top research universities and has also helped recruit for FIU leadership positions in the past. The firm has placed presidents at numerous institutions, including Rutgers University, Indiana University, Texas A&M University, and the University of South Carolina.

Committee members are expected to be announced in early April.

The FIU board “has reiterated its commitment to a thorough, diligent, and collaborative search process and will provide the university with frequent updates and opportunities to work together,” said the university. Details on an upcoming community forum are expected to be released in the near future. That public meeting will provide an opportunity for FIU students, faculty, and staff to share their thoughts and expectations concerning the institution’s next president.

Mr. Jessell, the interim president, received a one-year contract of $503,000, slightly higher than Dr. Rosenberg’s pay of $502,579, according to sources. Like Dr. Rosenberg, Dr. Jessell could also receive a performance-based bonus of as much as $150,000.

Founded in 1965, Florida International is an urban, multi-campus, public research university serving its students and the diverse population of South Florida. The university has campuses in Miami and North Miami. FIU is committed to high-quality teaching, state-of-the-art research and creative activity, and collaborative engagement with its local and global communities.

The university serves a diverse student body of more than 58,000 and 270,000 alumni. U.S. News and World Report has placed dozens of FIU programs among the best in the nation, including international business at No. 2. Washington Monthly Magazine ranked FIU among the top 20 public universities contributing to the public good.

R. William Funk & Associates is an executive search firm specializing in higher education executive recruitment. The firm has recruited chancellors/presidents for two-thirds of all public AAU universities. The firm has also recruited presidents or chancellors to more than one-half of U.S. News & World Report’s recently published “Top 30 National Universities.” Over time, it has conducted more than 425 searches for college and university presidents and chancellors as well as an even greater number of provosts, deans, and various vice presidents.

The firm has been recognized by the Women’s Network of the American Council on Education (ACE) for its work in recruiting women and minorities to senior levels of higher education. Notably, the search firm has broken the color and/or gender line in president searches at more than 40 institutions around the country, making in one of the most highly sought after search firms across the sector.