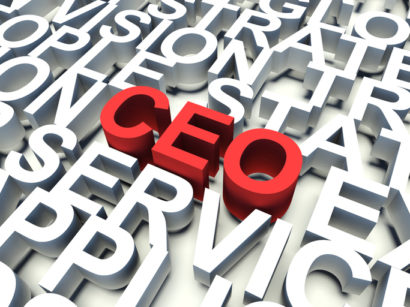 April 24, 2019 – Each year, Spencer Stuart tracks CEO transitions among S&P 500 companies. These movements can be part of a planned succession or can arise unexpectedly, often the result of company performance or personal issues. In addition to cataloging the reasons for CEO departures the search firm examines information about the successors, including whether or not they are internal candidates and whether they have been appointed chair of the board in addition to CEO.

Last year, Spencer Stuart found that the number of CEO transitions fell slightly, to 55 from 59 in 2017. In addition, a higher percentage of the new CEOs (27 percent) were hired from outside rather than promoted from within their companies. In 2017, 31 percent of new CEOs were hired from the outside, following a three-year decline in external hires (reaching a low of 10 percent in 2016).

The longer-term trend has been toward developing internal CEO successors, said the Spencer Stuart report. This is due in part to the Sarbanes-Oxley legislation, which provides for oversight of professional reporting; the professionalization of the human resources function; and boards’ increasing commitment to long-term CEO succession planning as a best practice, said the report.

“The reversal of that internally weighted trend in 2017 and 2018 may be attributed to a variety of factors, including individual company strategy shifts requiring new and different leadership, activist investors, the #MeToo movement, digital disruption and the intense pace of change,” said Spencer Stuart. “We will continue to monitor these trends.” 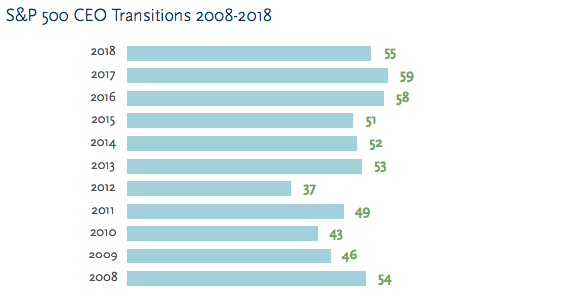 Why Do CEOs Leave? Who Replaces Them?

Spencer Stuart found that the vast majority (69 percent) of CEO transitions were attributed in company reports to the former CEO’s decision to retire or step down. This represents a decline from 2017, when 73 percent of transitions were driven by CEOs retiring or stepping down. In 2018, Spencer Stuart found that 22 percent of CEOs resigned under pressure according to company reports — vs. 15 percent in 2017 — and five percent left for health reasons. Another three percent left as a result of a merger or acquisition.

Poor Succession Planning Leading to High CEO Turnover
CEO transitions have always been challenging, but never more than in today’s high-stakes business environment. To gain a sharper sense of the demands posed by CEO successions and transitions, as well as the risk involved…

Seventy-three percent (40) of the new CEOs were promoted from within the company, the search firm found. In 2017, 69 percent of new CEOs were internal successors. Thirty-two of the internal CEO promotions, 80 percent, resulted from a planned succession.

This year, Spencer Stuart also examined whether the former CEO’s reason for leaving influenced the likelihood that a board would select an internal or external successor. Its analysis showed that when a CEO resigned under pressure, his or her replacement was more likely to have been hired from outside:

Spencer Stuart further broke down new CEO backgrounds into five categories: internally promoted CEOs, externally recruited CEOs, former company executives, board directors who take on the role of CEO and “insider-outsiders” who were recruited from outside the company and promoted into the CEO role within 18 months.

“An analysis of three four-year periods since 2007 suggests a longer-term trend toward internal successors,” the Spencer Stuart report said. “However, the 75 percent average for internal placements during the period between 2015 and 2018 includes both the highest and lowest number of external successors of the entire analysis.” 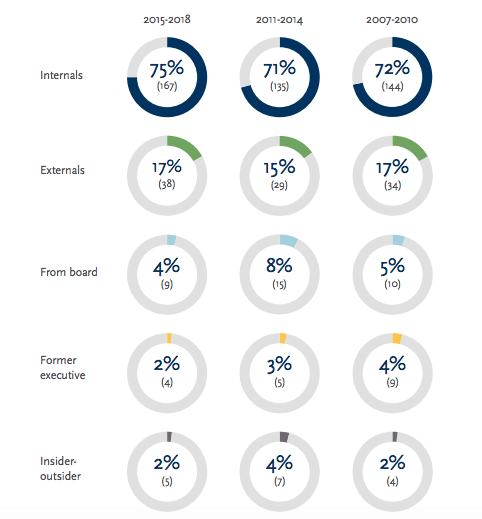 Related: The Expanding Role of Culture in Search and Succession

As CEO Turnover Rises, Outsiders Are Given a Closer Look
According to a report from PwC’s strategy consulting business, over the past several years more big companies have been deliberately choosing their new CEO from outside of the company as part of a planned succession…

“We are seeing considerable churn in the chief executive role. Companies are grappling with changing consumer behavior and new technologies disrupting almost all industries,” said Andrew Challenger, vice president of Challenger, Gray & Christmas. “A difficult business environment, with economic uncertainty, is causing boards to make changes in their leadership ranks.”

According to Challenger, Gray & Christmas, through March, 169 chief executives stepped down into other positions within the company, usually as a chairperson or other member of the C-suite. Another 126 CEOs retired, while 34 found new positions in other companies. Three CEOs reportedly left because of scandal, while two departed as a result of professional misconduct allegations. Another two left due to sexual misconduct allegations.

Related: How to Attract, Engage and Retain Talent in 2019

Check Out These Related Articles On CEOs: