Menu
View our Events
Stay Connected:
Despite the well-documented benefits, many companies still lag behind when it comes to creating a diverse workforce. In speaking with 60 top leaders, Russell Reynolds Associates found that those at the top are pivotal to delivering change. 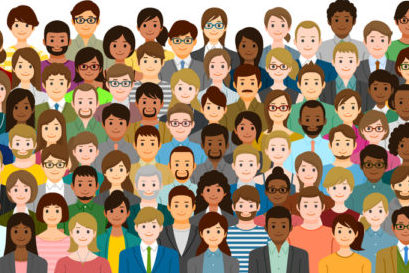 August 22, 2019 – A growing body of research shows significant correlations between diverse leadership teams and better business outcomes. Diverse companies are better able to attract top talent; to improve their customer orientation, employee satisfaction and decision-making; and to secure their license to operate, according to McKinsey & Company. In the majority of cases, they also improve their financial performance. And though diverse representation has been steadily increasing, much remains to be done.

Board chairs and CEOs play a critical role in driving diversity and inclusion in the workplace, according to a recent report by Russell Reynolds Associates. In speaking with nearly 60 directors and senior executives at large global companies across 10 countries who helped foster change in their organizations, the search firm found a consistent emphasis on the vital part that the top leaders play in creating environments where everyone can thrive.

Yet it is increasingly clear that simply hiring diverse employees is not enough to create business value, said the report’s authors, David Mills, Rachel Middleton and Harsonal Sachar, all of Russell Reynolds Associates.

To fully capitalize on the opportunities that diversity presents, leaders must also work to create an inclusive culture that allows all employees at every level to contribute their unique perspectives and maximize their potential. “If you have diversity, but a culture where people are unable or unwilling to speak up, then diversity doesn’t matter that much,” said Elizabeth Robinson, director of Russell Reynolds Associates and the Bank of New York Mellon Corp.

“Our research at Russell Reynolds Associates reveals that an organization’s senior-most leaders — CEOs, chairs and board members — play pivotal roles in creating inclusive cultures, regardless of their own diversity,” said the report. “In our inaugural D&I Pulse survey, we polled more than 2,100 executives about their employer’s diversity and inclusion efforts and their perceptions of and experiences in the workplace. One of the most striking findings was that when senior leadership (namely, the board and executive committee) champions D&I, key human capital outcomes improve.”

A common thread throughout the study’s conversations was the critical role that the chair and CEO can play in driving diversity and inclusion. Yet how chairs and CEOs deliver tangible results is often less clear.

From these firsthand interviews, Russell Reynolds drew three sets of key lessons about how board chairs and CEOs can help foster profound change in creating inclusive cultures and driving diversity:

1) Change Starts with the Chair

Every member of a board can affect D&I efforts. In general, however, board chairs have the most direct opportunities, as they are responsible for managing the composition of the board, running meetings and setting the board agenda. When the chair uses these functions to create an inclusive environment for the board, it becomes a model for the CEO and the rest of the organization to follow.

“Most of the time, we talk about boards and executive committees as setting the tone; I think it’s more important when they set the example,” Ana Paula Assis, general manager of Latin America for IBM Corp., told the report authors.

One of the themes that the authors said they consistently heard from board members was how difficult it is to credibly defend a commitment to diversity when the board itself is homogeneous. For better or worse, the composition of the board sends a strong signal about what the company values.

To be effective, the group has to attain a critical mass of diverse viewpoints rather than simply including a symbolic woman or other minority representatives. “My own experience is that when you are a lone female on a board, you are seen as a female voice,” said Nancy McKinstry, CEO and executive board chairman, Wolters Kluwer NV. “Once you reach a critical mass of three or more female directors, you are just seen as a voice; gender is no longer a factor.”

Just hitting certain numbers is not enough, said the report. To maximize the value of a diverse boardroom, a board chair must also create an environment that encourages participation by all members. Chairs “who are able to truly get the best out of all the voices in the room tend to be genuinely curious about different points of view and experiences,” said Philip Hampton, chair of GlaxoSmithKline plc and head of a UK commission to encourage gender parity among the FTSE 350. They “identify which voices are not being heard and actively create an environment in which everyone can meaningfully participate in the conversation.” 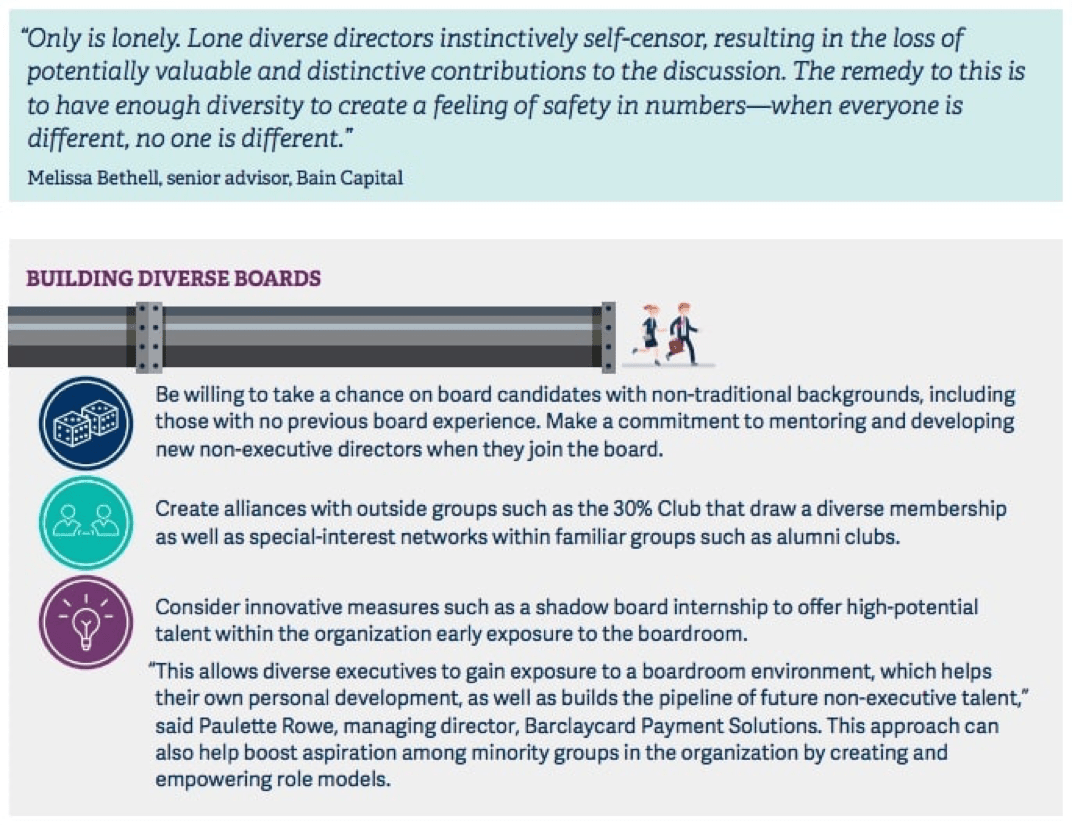 The chair and board can have a direct impact on the success of diversity and inclusion within the organization by setting the tone that this is a topic prioritized by the board. “Tone is hard to see or measure, yet it is a powerful tool with which chairs and board members can play a crucial role in advancing diversity and inclusion practices in the organization,” said Russell Reynolds Associates. “Through the behaviors and priorities the board chooses, directors can and do have a significant ability to create change.”

2) A Partnership Between the Chair and CEO is Essential

In organizations that maximize the benefits of diversity, the chair and CEO are typically aligned on its importance. “This partnership can make a real difference in terms of progress, as it shows the rest of the organization that diversity is something both the chair and CEO prioritize,” Margherita Della Valle, group CFO of Vodafone, told the report authors.

To empower the business to prioritize the topic in day-to-day operations, the chair and CEO should embed diversity and inclusion into the organization’s strategy, said the report. “Promoting an inclusive environment thereby becomes part of the company’s core strategic and operational priorities rather than a ‘nice to have’ that receives sporadic attention,” said Russell Reynolds. “The chair and CEO play a critical role in giving the business this license.”

Articulating the “why” for diversity needs to be multifaceted, clearly expressed and tailored to the business. While the business case for D&I is powerful, it is the combination of the economic case and committed leadership that changes behavior. The chair and CEO need to articulate this message authentically and personally, explaining not only the importance of the general D&I agenda but also its unique importance to their business. 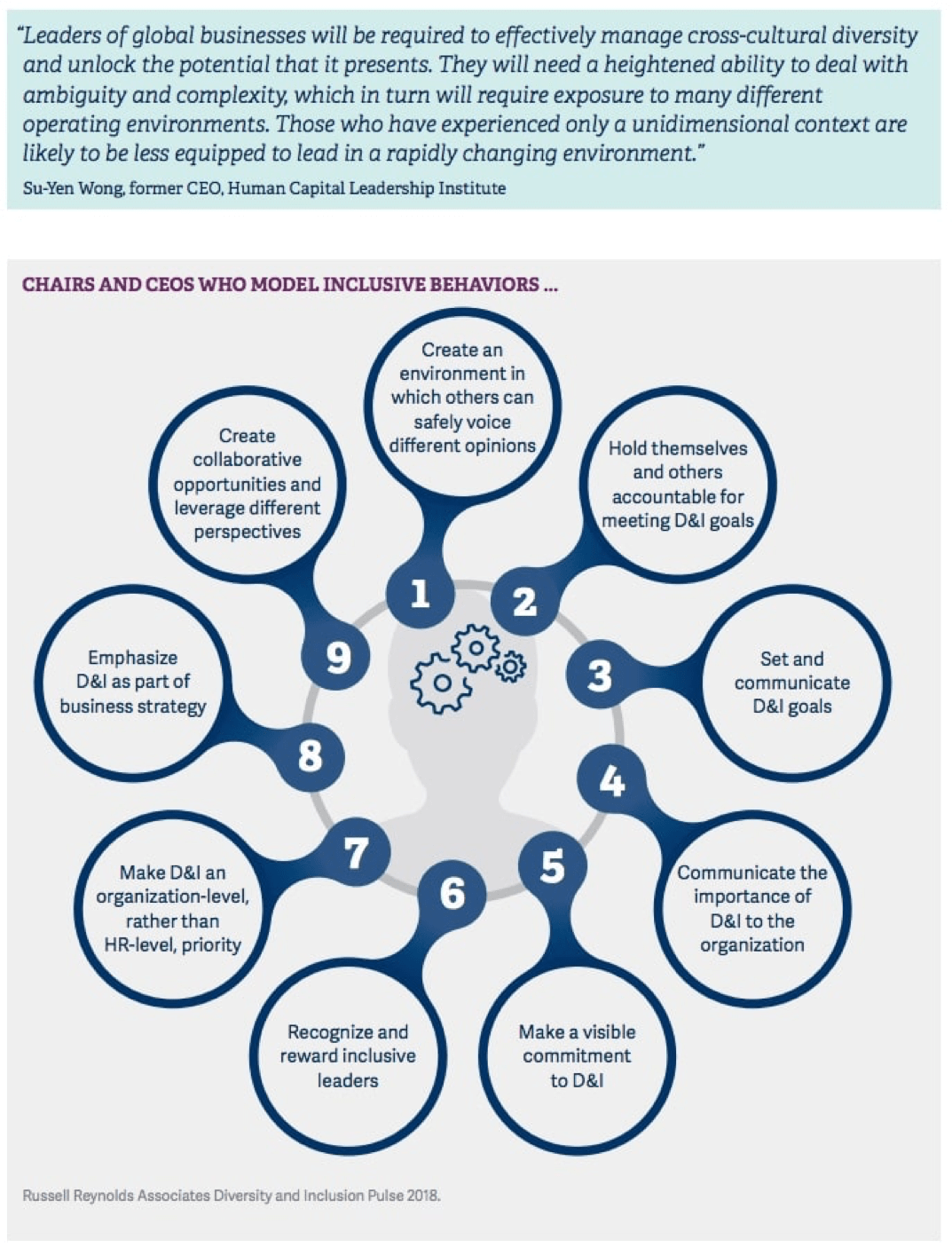 While the chair and CEO can partner on tone-setting and making diversity and inclusion a strategic priority, it is ultimately the CEO’s role to deliver tangible results by building a diverse organization, said the report. This creates an inclusive culture across all levels of the business in which all voices can be heard and consistently reinforcing the strategic imperative of the topic. To achieve these goals, many CEOs are faced with architecting a much broader transformation that includes culture change.

Related: The Current State of Diversity and Inclusion

While some organizations have shied away from counting employees according to their demographic category, most of the executives and board members interviewed by the authors said that gathering data on the positions held by diverse talent is an essential baseline when it comes to diversifying teams. From there, many choose to analyze the root causes behind the numbers and often set targets to improve them. Such targets “can be helpful to focus the mind” and create the necessary impetus to change, said Vodafone’s group CFO Margherita Della Valle. “When there is more pressure, people need to act on it, and that does tend to work in driving diversity.”

“You get what you measure,” said Hanneke Faber, president of Europe for Unilever. “If this is important in your strategy, you need to know how many minority employees you have and at what levels in your company; you need to set a goal to improve it, and you need to talk about it every quarter.” 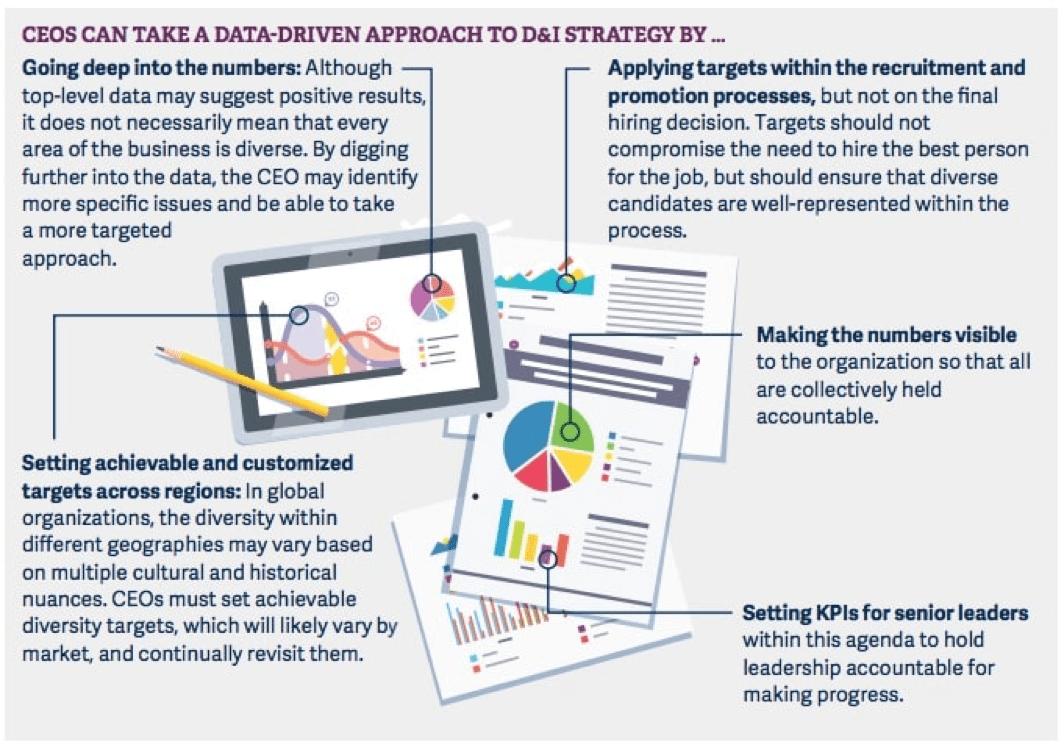 Naturally, it’s essential to understand what programs will be most meaningful and effective within a particular organization. “Without this understanding, policies designed to enhance inclusion can further segregate certain groups,” said Russell Reynolds Associates. “For example, when flexible working arrangements are aimed solely at women, they tend to be counterproductive.”

Increasingly, leaders are recognizing that a bumpy transition period is an inherent part of moving toward diversity—and that many leaders need coaching and mentoring to manage through it, said the report. Sari Baldauf, former chairwoman of Fortum Oyj, told the authors that diverse teams are not easy to lead because of variety of voices and viewpoints, which take time to hear out. “As the ultimate role model for inclusive leadership within the organization, a CEO must not only learn how to do it, well but also be proactive in helping other leaders learn similar skills,” she said.

For all the challenges associated with corporate diversity and inclusion efforts, the benefits that accrue to companies that meaningfully cultivate diversity and inclusion are too great to ignore, said Russell Reynolds Associates. “Diversity is vital to future-proof businesses and create organizational resilience, enabling organizations to more effectively preempt or mitigate risk and capitalize on a wider range of opportunities,” said the report. “As we look forward, it is the ability of leadership to create a culture and environment where the power of all forms of diversity can be fully realized that is the critical differentiator, and it will be one of the defining leadership attributes for the next generation.”