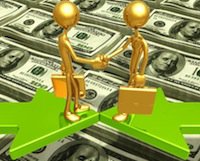 July 14, 2015 – DHR International has increased its holdings in Canadian search firm Caldwell Partners International to 1,141,000 common shares, representing approximately 5.36 percent of the common shares outstanding. DHR says that its increased stock purchase makes it now the third largest shareholder of Caldwell. According to DHR, its chairman, David Hoffmann, and G. Edmund King, Caldwell’s chairman, spoke recently concerning DHR’s interest in acquiring the entire company. Mr. King advised Mr. Hoffmann that he anticipated Caldwell’s board of directors would be meeting on July 9 to discuss DHR’s interest. No further updates as to the outcome of that meeting have been forthcoming.

“I have great respect for Mr. King and look forward to the prospects of our continued dialogue,” said Mr. Hoffmann. “We feel Caldwell would be a good strategic fit for both firms and we are anxious to continue our discussions. Caldwell is a great firm with great people. We feel that a transaction would be beneficial to both Caldwell’s shareholders and its search consultants.” Caldwell Partners did not provide comment at press time.

“We’re their third largest shareholder right now,” said Mr. Hoffmann. “We plan to continue to buy Caldwell’s stock and to continue to have discussions with them.”

In recent weeks DHR confirmed that it purchased an aggregate of one million shares of Caldwell Partners stock on the open market of the Toronto Stock Exchange. That share purchase represented approximately five percent of Caldwell’s issued and outstanding common shares. Prior to that stock purchase, Chicago-based DHR had been in communication with Caldwell’s management regarding a possible acquisition of the company. DHR said that it expects any negotiated transaction would be priced at “a premium to the recent market price of Caldwell’s common shares,” and that DHR would not require any external financing to complete a full share purchase of the company. To date, no agreement has been reached.

According to DHR, it intends to continue exploring its interest in a negotiated transaction with Caldwell, a process that could become protracted if Caldwell remains resistant to the overture. Both companies are said to be taking time to explore their options.

DHR CEO, Geoff Hoffmann, initially met with Caldwell CEO, John Wallace, in Toronto on June 15 with presentation materials that expressed DHR’s interest in a transaction with Caldwell. When told he should wait “a year or two” before pursuing an all-out acquisition of Caldwell, Mr. Hoffmann returned to Chicago to plot a share purchase plan with his father David. The senior Mr. Hoffmann is chairman of private equity firm, Osprey Capital, which owns DHR. On June 25, shares in Caldwell skyrocketed 41.5 percent amid unusually high trading volume and takeover rumors. More than 500,000 shares of the company’s common stock traded hands that day before a temporary suspension was imposed by Toronto Stock Exchange regulators late in the afternoon.

Caldwell Partners issued a statement after the markets closed that day reporting that it had “no knowledge of any material change in the affairs of the company which should cause a change” in its stock price. The company also said that it was “not aware of either the party or parties acquiring the shares, or the party or parties selling them.” But clearly the company had knowledge of DHR’s intentions based on Geoff Hoffmann’s stated interest, and his advances in person with Mr. Wallace in Toronto, 10 days before.

According to Hunt Scanlon Media, Caldwell Partners is anticipated to generate $40 million to $50 million in the current fiscal year. The company last week posted third quarter revenues of $11.9 million, an increase of 20 percent from revenues during the same period a year ago. U.S. revenues increased 15 percent in the quarter to $8.4 million; Canadian revenues were up 29 percent to $3.4 million.

“These results represent the ninth consecutive quarter of year-over-year growth for Caldwell Partners, and we believe it is a result of our single-minded focus on improving both the level of service we provide our clients, and the long-term value we deliver to our shareholders,” said Mr. Wallace. “We have built an incredible team of partners and support staff … and we will continue to expand our partner teams and our physical footprint where it allows us to strengthen the services we are able to provide to our clients on a global basis.” Whether Caldwell makes that expansion on its own, or under the ownership of DHR, remains to be seen.

“A deal for Caldwell could add another $50 million to DHR and give it the largest Canadian platform of any executive recruiter,” said Scott A. Scanlon, Hunt Scanlon founding chairman and CEO. “Canada has been somewhat overlooked by American recruiters,” said Mr. Scanlon. “But it is one of the most important global talent markets and that makes this a highly strategic acquisition for DHR.” According to Hunt Scanlon, the Canadian market accounts for annual recruiting fees exceeding $150 million-plus. The service sector dominates Canada, which includes leading companies in aerospace, financial services & banking, oil & gas, logging and automotive.

Caldwell Partners, No. 9 in this year’s Hunt Scanlon search firm rankings, has a current market capitalization of $36 million. “Caldwell is the fastest growing top 10 search firm in our rankings,” said Mr. Scanlon. “In the Canadian market, Caldwell is the clear market leader; it has a stellar reputation among clients and acquiring the company would give DHR an enlarged global footprint that would allow it to more effectively compete head-to-head with industry leaders Korn Ferry, Egon Zehnder, Russell Reynolds Associates, Spencer Stuart and Heidrick & Struggles for multinational client accounts.”

Just last month, DHR struck a deal to acquire 17 offices and 75 recruiters from beleaguered New York search rival CTPartners, a company scandalized by sexual bias complaints in its top management ranks. The purchase came four months after DHR set its sights on the company and started buying large blocks of shares. “DHR seems to be setting itself on the same path now for Caldwell,” said Mr. Scanlon. “My concern is the destabilizing effect that a long-drawn-out negotiation might have on Caldwell and its staff. At CTPartners, management’s inability to come to terms quickly with a suitor undermined the company and weakened its ability to manage itself.” According to an analysis by Hunt Scanlon, if DHR ends up bringing Caldwell Partners under its domain, the firm will have close to 75 worldwide offices, nearly 1,250 employees dedicated to providing senior-level executive search and leadership solutions services, and global revenues topping $300 million in 2016.