Menu
View our Events
Stay Connected:
The selection of Matthew Mendelsohn, a director with current responsibility for venture capital assets comprising more than 25 percent of Yale’s total endowment, followed an international search that “left no stone unturned.” A vaunted institutional investor, Mr. Mendelsohn is also well known for his ability to build and lead teams, and for mentoring aspiring investors. 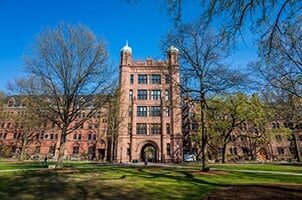 September 7, 2021 – According to recruiters specializing in the finance function, demand for executive level, “high impact” investing talent has been on the rise, and the quest for these top leaders is expected to soar in the aftermath of the pandemic with all the changes it has wrought on businesses of every size in every sector. But recruiters say these roles can be generally difficult to develop and ultimately recruit for clients, given their multi-disciplinary and evolving nature. In fact, impact investing roles are new to many organizations, they report.

One field sector specialist, executive recruitment firm, David Barrett Partners, recently assisted in the placement of Matthew Mendelsohn as the next chief investment officer of Yale University. He succeeds his mentor, David Swensen, who died in May. David Barrett led the assignment. The selection of Mr. Mendelsohn, a director with current responsibility for venture capital assets comprising more than 25 percent of Yale’s total endowment, followed an extensive international search by a committee chaired by former Yale provost Ben Polak, the William C. Brainard professor of economics.

“In addition to being an exceptional institutional investor, Matt is widely recognized for his ability to build and lead teams, and for his devotion to mentoring aspiring investors,” said Peter Salovey, president of Yale. “And as his former students from Yale’s endowment management course can attest, he welcomes opportunities to impart both the skills and the core values of ethical and successful institutional investing.”

“The ‘Yale Model’ of asset allocation and manager selection has changed the world of institutional investment management,” Mr. Salovey said. “With Matt’s leadership, Yale’s exceptional investment team will continue to evolve and set the standard for the field.”

“The committee left no stone unturned in the search,” said Mr. Polak. “In the end, the right answer was immediately before us. Matt Mendelsohn has the respect of his colleagues, of managers, and of his peer CIOs — and an extraordinary record of investing, building, and leading teams, and representing what is best about Yale.

“Matt shares David’s hallmark qualities: He’s analytically rigorous both in his disciplined approach to asset allocation and in his first-principles approach to specific investments; he has incredible insight into the character and dynamics of his team and of Yale’s outside managers; and he starts from the core belief that everyone involved with the Yale endowment must operate with complete honesty, integrity, and transparency,” Mr. Polak said. “Ethical and steadfast, tough but kind, a leader and an example to all around him, Matt deeply understands the mission of the university. He appreciates why we’re all here.”

“Matt’s vision and approach to endowment management are well-aligned with what has already made the Yale investments office so strong,” said Heather Tookes, professor of finance, Yale School of Management. “I fully expect continued superior manager selection, skillful asset allocation, and attention to risk management. David’s mentorship is obvious in Matt, but so are raw talent and an eye towards the future. We all know that investment opportunities are changing. Not only is the world evolving, but the influx of participants following similar strategies has made markets increasingly competitive. Matt brings forward-looking energy and ideas to an already incredibly strong foundation,” she said. “I think he would be a successful CIO anywhere. But because his connection to Yale and its mission runs so deep, the incentive to do well for the institution is particularly strong here.”

Mr. Mendelsohn, a Yale College graduate, and CFA charterholder, joined the school’s investments office in 2007. Over the last 14 years, he has contributed to the management of most of the asset classes in which Yale invests. In the past 10 years, its venture capital portfolio has returned 21.6 percent per annum, well in excess of the S&P 500 and relevant private equity benchmarks. Mr. Mendelsohn also has experience with asset allocation, risk and liquidity management, and sourcing and developing relationships with Yale’s investment partners.

“I couldn’t have asked for a better set of investors to learn from and work alongside for the past 14 years,” said Mr. Mendelsohn. “From David Swensen, dean Takahashi, and all of my current and former investments office colleagues to the illustrious members of our investment committee, Yale benefits from an enormously talented and experienced group of mission-driven investors rooted in time-tested investment principles. Though we will evolve to face new challenges, the future will no doubt rhyme with the past as we build off of a strong foundation.”

“I am honored to be given the opportunity to lead this team, whose wonderful professionals are exceptional not simply for their investment talent, but also for their commitment to the principles that guide Yale’s mission,” Mr. Mendelsohn said. “Looking ahead, we will build on the office’s longstanding allegiance to ethical investment practices and develop a diverse team of internal and external investment managers as we seek to continue Yale’s legacy of investment success.”

The California Public Employees’ Retirement System (CalPERS) has selected Dore Partnership to lead its search for a new chief investment officer. CEO Marcie Frost expects to start the search process at the end of July or early August, conduct interviews in late summer and fall, with final selection of a CIO in fall or early next year, she said at Wednesday’s virtual offsite meeting of the California Public Employees’ Retirement System, Sacramento.

In 2020, Yale’s endowment was valued at more than $31 billion. Spending from the endowment covers about one-third of the university’s annual budget. Founded in 1701, Yale is the third oldest institution of education in the U.S.

David Barrett Partners was founded in 2005 by a team of investment management recruiting industry veterans from large, multinational search firms who were drawn to establishing a focused investment and wealth management boutique.

The firm has a growing practice in the placement of CIO leadership, having placed investment officers for Harvard Management Co., University of California and Stanford Management Co. It is considered among the top boutique recruiting specialists in the field, serving traditional and alternative money managers, endowments, foundations, family offices and sovereign wealth funds.

Mr. Barrett has over 25 years of broad-based experience in senior-level recruiting in investment and wealth management. Besides David Barrett Partners, he co-founded another buy-side boutique search firm in 2003. Previously, he spent 17 years with two global search firms, Russell Reynolds Associates and Heidrick and Struggles. He began his career in 1981 in equity research with Brown Brothers Harriman in New York. Following graduate school, Mr. Barrett returned to investment management as an equity analyst with Trust Company of the West in Los Angeles.