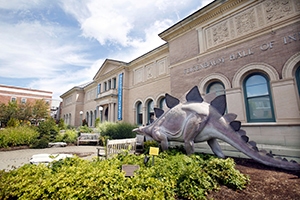 October 2, 2018 – The board of trustees of the Berkshire Museum has retained Washington, D.C.-based executive search firm Brent D. Glass LLC to identify candidates for the executive director role at the museum. Van Shields announced his retirement from the position in June.

The search firm, led by Brent Glass, provides management consulting to museums, historic sites and other cultural organizations, working with more than 60 cultural, historical and educational organizations around the world. Dr. Glass is director emeritus of the Smithsonian’s National Museum of American History, which he led for nearly a decade. He is an author, television presence and international speaker on cultural diplomacy and museum management.

“Dr. Glass brings to the Berkshire Museum deep knowledge, experience and understanding of museums and what is needed from those who would lead them,” said Elizabeth McGraw, president of the board of trustees. “We are eager to continue the work of securing the museum’s future for our community.”

Dr. Glass said he and his team are up for the challenge of finding a new executive director. “We are excited about working with the Berkshire Museum to find a strong, creative, and effective leader at an extraordinary moment for the museum and the community it serves,” he said. The assignment is expected to take six to nine months.

In 1903, Berkshire Museum founder Zenas Crane, inspired by institutions like the American Museum for Natural Science, the Smithsonian and the Metropolitan Museum of Art, decided to blend the best attributes of these establishments in a new museum for the people of western Massachusetts.

“These individuals must be the voice of the museum and that makes it essential to have an inspired leader in place. And these leaders require, now more than ever, top-notch fundraising skills,” he said. “They must develop strong relationships with donors and truly serve as the face of the institution.”

That is something Mr. de Montebello knows well. He served as both the voice and face of the Met as its director for 31 years. He came to the organization in 1963 as a curator in the department of European paintings and was named director in 1977. His legendary stewardship took off from there.

Museums are increasingly turning to specialist recruiters to help fill critical, senior level leadership roles. And as these top positions become more sophisticated and complex, the hunt is on for top flight talent to fill these critically important roles. With that, search fees across the space are rising substantially, according to recruiters. Here’s a look at a few recent assignments taken from the Hunt Scanlon Media archives:

Noetic Search recruited Crystal Bowyer as the president and CEO of The National Children’s Museum. Rhyan Zweifler, president of the Chicago recruitment firm, led the assignment. Founded as the Capital Children’s Museum in 1974, the museum served children and families for 30 years in Northeast Washington, D.C.