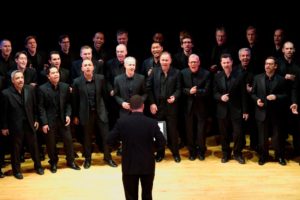 “We are thrilled to welcome Gavin to Big Apple Performing Arts and NYCGMC,” said Damian Kington, chair of the board of Big Apple Performing Arts.  “Gavin’s impressive credentials in choral conducting and performance development, as well as his experience in mission-led choral programming and community engagement, and his fresh and innovative perspectives will position us for even greater success as we begin our fifth decade as one of the world’s leading LGBTQ+ performing groups.”

“This Pride month, we get to celebrate and commemorate everything that’s been achieved over the past 50 years and get excited about what the next 50 will bring,” he said. “NYCGMC, under Gavin’s artistic direction, will play an important role in defining our community’s future and creating even more positive social change, just as we’ve done since 1979.”

Mr. Thrasher has extensive experience in creating numerous youth programs that bring music education to communities lacking access to music and the arts. He is a professional conductor, singer and teacher. Mr. Thrasher is currently interim artistic director and conductor for the Gay Men’s Chorus of Los Angeles (GMCLA), where he develops the musicianship and sound of the ensemble and its individual members, creates the concert season and oversees all of GMCLA’s educational programs. He has been a guest conductor and clinician for ensembles and international festivals and presented his work to international conferences. Prior to taking over as interim artistic director, Mr. Thrasher was the assistant conductor and youth programs director for the GMCLA.

Mr. Gavin is recognized for the collaborative approach he brings to his work and has built lasting relationships with organizations in L.A. such as the Los Angeles Master Chorale, Vox Femina, the Arts for Incarcerated Youth Network and the Partnership for Los Angeles Schools. He has numerous television and film credits as a vocalist, including the Mindy Project, Ellen and Veep.

“I am absolutely delighted that Gavin Thrasher has been chosen as my successor as artistic director,” said Mr. Beale. “His unique combination of outstanding musicianship and passionate commitment to LGBTQ+ equality really sets him up for success. He is a kind man of great integrity and has proven a commitment to the cause of LGBTQ equality. I think he is a great choice and wish him all the very best.”

Founded in 1980, New York City Gay Men’s Chorus is a world-class, world-renowned New York institution and a pioneering voice for the LGBTQ community. It is comprised of more than 260 talented singers of various ages, backgrounds and experiences. The chorus performs in a variety of settings, including special, private and corporate events, concerts, television appearances, festivals, Broadway/theater productions, conferences, weddings, parties, fundraisers and community events.

“For 40 years, NYCGMC has touched people’s lives through music and been an integral part of the LGBTQ+ community in New York City and around the world,” said Mr. Thrasher. “I look forward to working together with the membership to build on this foundation and create the future of NYCGMC as a voice for hope and change worldwide.”

Dr. Thibodeau founded ACG in 1997 and has been part of numerous projects in all practice areas to grow institutional sustainability, advance the arts and culture sector, and enhance communities served by the industry. He has guided hundreds of non-profit, university and government clients in achieving effective leadership transitions, planning cultural facilities, increasing revenues, developing dynamic institutional brands and messages, crafting strategic plans and business models, and revitalizing board governance practices.