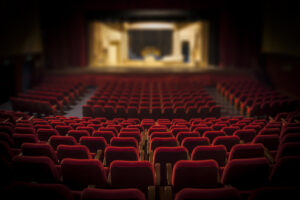 Mr. Booth is a Commonwealth Government appointment to the board of the Australian Children’s Television Foundation, as well as a director of a number of companies in the film and television sector, including production company Indian Pacific Pictures Pty. Ltd., and Home Fire Creative Industries Pty. Ltd., which is in a market led process with the State Government to build and operate major film studios in Western Australia.

Mr. Booth has also served as a non-executive director on the boards of national screen agency Ausfilm, Awesome Arts, and the Spare Parts Puppet Theatre. He started his working career as a lawyer, and after a variety of legal and film industry roles including working as business affairs manager for drama and comedy at the ABC in Melbourne, Mr. Booth served as CEO of Screenwest, the Western Australian peak film financing body.

“Black Swan has a strong history and place in the landscape of the Western Australian arts sector,” Mr. Booth said. “To lead this talented team, working with inspirational Western Australian storytellers and performers at Black Swan, is both a personal honor and a professional privilege.”

Founded in 1991, Black Swan has earned both critical and popular acclaim for its world premiere productions and highly distinctive reinterpretations of international theatre classics – all of which are infused with the unique culture of Western Australia.

Operating throughout the Asia-Pacific region, AEGEUS Executive Search is a partner to boards and senior management of organizations and institutions in: education, arts and culture, social enterprise, public sector, and sports, leisure, and tourism. The firm specializes in the identification, assessment, and recruitment of leading candidates with high potential and exceptional cultural fit who will make an impact on the organization and the sector in which they operate.

Tony Grierson is the founder and managing director of the firm. His expertise in executive search encompasses board, senior executive, and academic roles in education, arts and culture, social enterprise, public sector, and sports, leisure, and tourism. In the arts and cultural sectors, he has conducted searches for board members, CEOs, executive directors and artistic directors, along with senior executive positions for many of Australia’s performing and visual arts organizations, festivals and cultural institutions. These include the National Gallery of Victoria, National Film & Sound Archive, Powerhouse Museum, Orchestra Victoria, Australian Ballet, Australian Major Performing Arts Group, Queensland Theatre Company, and the Melbourne Symphony Orchestra, among others.