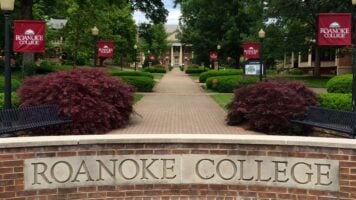 March 31, 2022 – Following a five-month nationwide search, education-focused executive recruiter Academic Search has placed Frank Shushok Jr. as the 12th president of Roanoke College in Salem, VA. Michael C. Maxey, the longest serving president in the college’s history, announced in September that he would be retiring at the end of the academic year. Mr. Maxey has held the role since 2007. Leading the assignment were Jay Lemons, president and senior consultant; Sharon D. Herzberger, senior consultant; and Jennifer Kooken, consultant. The search produced a pool of more than 100 applicants of diverse backgrounds.

“Throughout the presidential search, Dr. Shushok inspired us with his spirit, energy, and centered dedication to student learning,” said Malon Courts, chairman of the Roanoke College board of trustees and a 1992 Roanoke College graduate. “Dr. Shushok’s background aligns with the most important needs of the college, and he understands the value of who we are, our culture, people and traditions, including the importance of our rich Lutheran heritage. He will propel us forward, embracing innovation while respecting history and tradition to make Roanoke College an even greater institution.”

“As a national thought leader in residential education and student well-being, Virginia Tech has been fortunate to have Frank Shushok as our vice president for student affairs,” said Virginia Tech president Tim Sands. “He exemplifies the spirit of Ut Prosim (That I May Serve), and that will be a great benefit to the faculty, staff, and students of Roanoke College. We appreciate his dedicated service, and while he will be greatly missed at Virginia Tech, higher education in the Commonwealth has gained a talented new leader and we wish him all the best.”

Dr. Shushok said he was drawn to Roanoke College for the convictions held by the institution. “Roanoke College is a beautiful community deeply committed to students and their holistic learning,” he said. “Everywhere at Roanoke College, there are structures and individuals committed to a kind of deep learning that emboldens the human spirit, strengthens public discourse, and becomes a true north for what matters most. I admired this community the moment I discovered it, and I am honored to join the faculty and staff in pursuit of such a worthy calling. I am humbled by the board of trustees’ faith in me to contribute to this legacy that has been in motion since 1842.”

Roanoke College, founded in 1842, is an independent, residential, liberal arts college. The college enrolls about 1,900 undergraduate students. New students in the 2020-21 academic year included 465 first-year and 65 transfer students. The 128 full-time and 63 part-time faculty are committed to student success and 95 percent of the tenured/tenure-track faculty hold the highest degree possible in their field. Roanoke offers 96 areas of study in the full range of liberal arts and sciences disciplines, cross-disciplinary programs, as well as programs to prepare students for careers in the health professions.

Academic Search is the only search firm in the nation with a formal relationship to a premier leadership development program. As the subsidiary of the American Academic Leadership Institute (AALI), the firm provides substantial financial support to a number of leadership identification, development and support programs across all sectors of public and private higher education. The firm is headquartered in Washington, D.C.

Dr. Lemons has served as president of Academic Search since 2017, after serving for 25 years as a college president in both public and private higher education. A recognized leader in the academy, he has been particularly devoted to supporting leadership talent by working with new college presidents on the faculty of the new presidents’ programs of the American Association of State Colleges and Universities and the Council of Independent Colleges and through the professional development programs for aspiring leaders of the American Academic Leadership Institute. Dr. Lemons was president of Susquehanna University from 2001 to 2017, and prior to that served as chancellor of the University of Virginia’s (UVA) College at Wise, UVA’s public liberal arts college in southwestern Virginia.

Dr. Herzberger served as president of Whittier College for 13 years, before retiring and being named president emerita. During her prior career, at Northwestern University and Trinity College, she held positions as vice president for planning and administration, vice president for student services, associate vice president for a capital campaign, and special assistant to the president for affirmative action. As a professor of psychology her research focused on the biases in individual and group decision-making.

Ms. Kooken joined Academic Search from Merrimack College, where she served as director of business school initiatives. Prior to that, Ms. Kooken collaborated with academic administrators and clients to develop engaging professional development programs for the Graduate Management Admission Council. She began her career in higher education as assistant director of graduate admissions for Babson College.