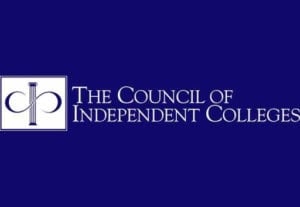 May 4, 2021 – Education-focused executive recruiter Academic Search has assisted the Council of Independent Colleges (CIC) in Washington, D.C., in the recruitment of Marjorie Hass as its new president. Richard Ekman, who led the organization for 20 years, announced last fall that he would be retiring in July. Senior consultant Ann Die Hasselmo led the assignment along with president and senior consultant Jay Lemons and consultant Jennifer Kooken. “I am delighted to welcome president-elect Hass as the first female president in the 65-year history of CIC,” said Katherine Bergeron, chair of the CIC board of directors. “She is a visionary, dynamic and entrepreneurial leader whose rich experience in financial management, program building, and leadership development will mark a new era at the council.”

“President-elect Hass has both the experience and the vision to advance CIC’s support of member institutions during this time of challenge, transformation, and opportunity in independent higher education,” added Mr. Ekman.

Ms. Hass is the president of Rhodes College in Tennessee and former president of Austin College in Texas. She served on the CIC board of directors from 2012 to 2016, including service as vice chair for resource development on the board’s executive committee from 2014 to 2016. Ms. Hass is a frequent presenter at the annual CIC Presidents Institute and most recently served as faculty in CIC’s New Presidents Program. She has also been active in the leadership of other prominent higher education associations, serving as a board member of the Association of American Colleges & Universities and as former chair of the board of the National Association of Independent Colleges and Universities.

Ms. Hass said she is eager to build on CIC’s strengths and Mr. Ekman’s legacy. “This is a moment for bold action and meaningful leadership on behalf of independent higher education,” she said. “It is not hyperbole to say our country’s future as a global educational leader and democratic standard bearer is at stake. CIC’s role is unique in its focus on building capacity at every level and within every sphere of independent colleges and universities. Areas of particular urgency include: building the leadership pipeline, strengthening financial models, education for democratic citizenship, and transformative action for equity, access and inclusion.”

The Council of Independent Colleges is an association of nearly 700 non-profit independent colleges and universities, 27 state-based councils of independent colleges, and more than 50 other higher education affiliates. Through an evolving agenda of programs and services responsive to member needs, CIC has worked since 1956 to support college and university leadership, advance institutional excellence and enhance public understanding of the important contributions made by independent higher education to society.

For over three decades, Academic Search has been a leader in designing and implementing search processes for leaders of colleges and universities across the country. The firm has completed hundreds of executive searches for higher education institutions and related organizations, for roles ranging from presidents to provosts to deans. Academic Search is the only search firm in the nation with a formal relationship to a premier leadership development program. As the subsidiary of the American Academic Leadership Institute (AALI), the firm provides substantial financial support to a number of leadership identification, development and support programs across all sectors of public and private higher education. The firm is headquartered in Washington, D.C.

Dr. Hasselmo is president emerita of the AALI and of Hendrix College. Prior to becoming the founding president of AALI, she was managing director of Academic Search Consultation Service. Her earlier career in higher education administration spanned positions from faculty leadership to the presidency. Dr. Hasselmo’s experience includes work at both public and private colleges and universities. She has also held a variety of chairs and presidencies of national higher education boards and associations.

Dr. Lemons has served as president of Academic Search since 2017, after serving for 25 years as a college president in both public and private higher education. A recognized leader in the academy, he has been particularly devoted to supporting leadership talent by working with new college presidents on the faculty of the new presidents’ programs of the American Association of State Colleges and Universities and the Council of Independent Colleges and through the professional development programs for aspiring leaders of the American Academic Leadership Institute. Dr. Lemons was president of Susquehanna University from 2001 to 2017, and prior to that served as chancellor of the University of Virginia’s (UVA) College at Wise, UVA’s public liberal arts college in southwestern Virginia.

Ms. Kooken joined the firm from Merrimack College, where she served as director of business school initiatives. Prior to that, Ms. Kooken collaborated with academic administrators and clients to develop engaging professional development programs for the Graduate Management Admission Council. She began her career in higher education as assistant director of graduate admissions for Babson College.