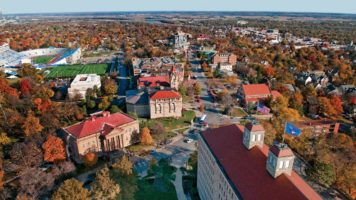 December 16, 2019 – William Funk & Associates, which specializes in recruitment for roles in higher education, has placed Barbara Bichelmeyer as the next provost and executive vice chancellor for the Lawrence campus at the University of Kansas (KU). Her appointment concludes a national search process that began in the spring. Four finalists were invited to the university to meet with members of the community and deliver a public presentation beginning in October.

“Barbara is a talented researcher and administrator as well as a proud KU alumna with an unabashed love for this place,” said the school’s chancellor, Douglas A. Girod. “Beyond her credentials. I’ve had the pleasure of working with her for years on initiatives to enhance higher education’s role in regional economic development. As a result of our work together, I have come to know Barbara as a genuine and compassionate person who cares deeply about students, research and higher education.”

Ms. Bichelmeyer, who will start her new role in February, is currently the provost and executive vice chancellor at the University of Missouri-Kansas City, where she also served as interim chancellor. Prior to that, she held numerous leadership roles at Indiana University-Bloomington and elsewhere within the Indiana University system.

Established in 1865, the University of Kansas is a large, state-sponsored university, with five campuses. Enrollment at the Lawrence and Edwards campuses was 24,708 students with an additional 3,383 students enrolled at the KU Medical Center for a total enrollment of 28,091 students across the three campuses.

William Funk & Associates has conducted more than 400 searches for university and college presidents and chancellors over the last 35 years. The firm is also undertaking the president search for Bradley University.

“At a very basic level, colleges and universities typically only conduct president or chancellor searches once every seven or eight years,” said Mr. Funk. “They don’t have the internal expertise or the organization to conduct these searches themselves.” When the need to conduct a president search arises, he added, “boards will reach out to search firms such as ours to help them lead it.”

The search process, he concluded, is “complex, fragile, and nuance-laden,” and search firms simply have the expertise to get the job done.