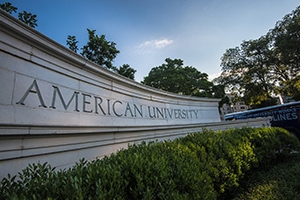 “Dan is deeply committed to the integration of scholarship, teaching and student life as the defining goal of a university, and he has a record of success in achieving it,” said Sylvia M. Burwell, president of American University. “He is clearly committed to the elements of our strategy, which we shared as a prominent component of the search process.”

Search committee co-chairs Jeffrey Rutenbeck, dean of the School of Communication, and Christine Chin, dean of the School of International Service, said that the search drew considerable attention from potential candidates. “It became clear in the early stages of the search that there was tremendous interest in this position,” they said. “Dr. Myers stood out for his experience with enterprise-wide strategic planning and his commitment to academic rigor, high-impact scholarship and inclusive excellence.”

From 2015 to 2018, Dr. Myers served as provost and EVP for academic affairs at Marquette University where he also held the academic appointment of professor in the Department of Social and Cultural Science. He spent three years in this leadership role at Marquette before returning to the faculty in November. Dr. Myers oversaw all aspects of academic affairs and had joint oversight for the university’s budget. He focused on strong faculty relations, built a model of faculty development and enhanced interdisciplinarity through cluster hiring. In addition, Dr. Myers developed a record of significant accomplishments in diversity and inclusion, which included a campus climate study and action plan; a new LGBTQ+ resource center and faculty/staff affinity groups; a race and ethnic studies program; and new hiring protocols for faculty and staff searches.

Before that, Dr. Myers was vice president and associate provost for faculty affairs at the University of Notre Dame. In that role, he designed and managed a $13.5 million competitive cross-disciplinary cluster hiring process, which launched new faculty groupings and led to increased research output and funding. During his 17 years at Notre Dame, he also served as associate dean of the College of Arts and Letters, director of faculty research and development for the Joan B. Kroc Institute for International Peace Studies, founding director for Center for the Study of Social Movements and Social Change, and professor of sociology.

In his position with American University, Dr. Myers will oversee all academic schools and units and play a crucial role in the university’s new strategic plan. “I look forward to raising our research profile to enhance our scholarly impact and benefit the student experience,” he said. “Working in Washington to leverage and build the role of AU in the city and world is exciting.”

American University has eight schools and colleges: the School of International Service, College of Arts and Sciences, School of Business, School of Communication, School of Professional and Extended Studies, School of Public Affairs, School of Education and the Washington College of Law. AU offers over 160 programs, including 71 bachelor’s degrees, 87 master’s degrees and 10 doctoral degrees. Its student body numbers over 13,000 and represents all 50 U.S. states and 141 countries.

Ms. Haertel’s search efforts focus on leadership positions in research universities, liberal arts colleges, independent schools and non-profit organizations. She has a wealth of non-profit and corporate experience and has served on multiple non-profit boards and advisory committees.

Ms. Gorman, who works in Spencer Stuart’s Boston office, is a member of the education, non-profit and government practice. She focuses on leadership positions in liberal arts colleges, research universities, independent schools and non-profit organizations.