Menu
View our Events
Stay Connected:
Colleges and universities are increasingly looking to top-flight diversity officers to help oversee their diversity, equity, and inclusion efforts. A report from Russell Reynolds Associates looks at the backgrounds and competencies they are seeking in chief diversity officers, how they are structuring the role, and what it takes to make a DE&I chief successful. 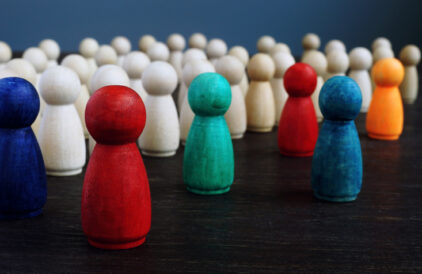 June 7, 2021 – Chief diversity officers (CDO) have become increasingly common across leading institutions of higher education, driven by the push to create more diverse, inclusive, and equitable environments for the benefit of all members of the community. While much has been written on the evolution of the mandate and remit of this role, relatively little data exists to identify the common profiles and reporting structures into which these roles fit. To address this gap, Russell Reynolds Associates combined its proprietary database of candidates from past chief diversity officer searches the firm has conducted with publicly available information to identify 60 diversity chiefs from major research universities and liberal arts colleges. The search firm reviewed the profiles, backgrounds and reporting structures and spoke separately with more than a dozen sitting chief diversity officers and university presidents to understand the unique context and challenges of this role.

The firm’s findings indicate that, while specific needs and priorities will vary by institution, several broad conclusions can be drawn about the effective chief diversity officer.

The role of chief diversity officer is expanding at universities. It has become one of the most important positions for shaping the vision, culture and very face of institutions of higher learning from coast to coast. It is also increasingly becoming a cabinet-level job, with a broad range of responsibilities beyond that of most administrators.

The growth of this role builds upon the historical trend toward promoting diversity, equity and inclusion (DE&I) in higher education that began with the creation of “minority affairs” roles, which first began appearing at universities in the 1970s, according to the Russell Reynolds report.

“Primarily oriented toward compliance or risk-mitigation, including issues related to workplace discrimination, affirmative action and accessibility, these roles were typically located at the department level or within a division of student services, rather than at the executive level or within the president’s cabinet,” the firm found. “While undoubtedly integral in moving the overall conversation regarding campus diversity forward, these roles were often criticized as purely symbolic or insufficient appeasement to minority and underrepresented groups who felt their needs were not being properly addressed.”

Russell Reynolds noted that over the course of the early 2000s, understanding and conceptualization of diversity began to shift, with many pointing to a series of Supreme Court rulings, most notably related to the University of Michigan’s affirmative action admissions policy, as being instrumental in shifting universities away from a legalistic and mechanical view of diversity and toward a more holistic understanding of how diversity in all forms can benefit learning environments. “Rather than being defined simply as the presence of individuals that differ by ethnicity, gender, sexual orientation or some other social identity, diversity is now seen as a resource that can be leveraged to enhance the learning of all students and is, therefore, fundamental to institutional excellence,” the search firm said.

Accordingly, the search firm said that the mandate and expectations of the CDO role have also evolved, with many universities now positioning the function as integral to the strategic direction and success of the institution. While specific mandates vary by institution, effective CDOs are now distinguished by their ability to infuse diversity into all aspects of university life, including: 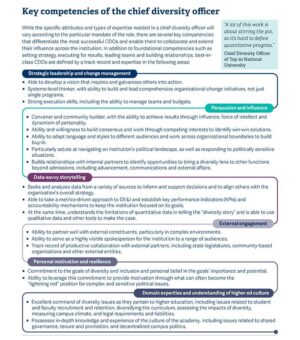 Historically, diversity professionals often came to the role from either an HR or other compliance-focused background, indicative of the narrow scope usually afforded to the function. As the mandate and complexity of the role have expanded, so too has the range of profiles that have become relevant. Russell Reynolds’ analysis revealed four “archetypes” of CDOs among today’s diversity leaders, representing the most common current pathways to the CDO role.

Almost four in five chief diversity officers in Russell Reynolds’ sample report either to the president or chancellor, reflecting the clear prioritization in recent years of this role as part of the president’s cabinet. Notably, externally appointed chief diversity officers were significantly more likely to report to the president or chancellor compared to internal promotes (94 percent vs. 58 percent). “This discrepancy may be a result of institutions using a senior reporting structure as an incentive to entice high-caliber external talent or of those institutions that recognize genuine strategic value of the role being more likely to launch a national search to surface external candidates,” the search firm said.

Locating the CDO directly below the president, chancellor or provost significantly increases their ability to effect change at the highest levels, given the increased visibility, access and symbolic impact of these senior positions, according to Russell Reynold’s findings. “Through their participation in cabinet meetings or other campus-wide decision-making processes, CDOs are able to infuse DE&I considerations into important conversations about budgeting, new initiatives, and strategic planning,” the firm said.

Roughly one in six chief diversity officers holds a dual title, most often serving as both CDO and as their institution’s primary faculty development leader or head of strategic planning. “These dual roles can be useful in suffusing diversity issues across a wider swath of university operations but should be approached with caution,” the Russell Reynolds report said. “Hybrid roles can also result in a portfolio that is too broad for one position or in a deprioritization of diversity as a matter of institutional importance.” 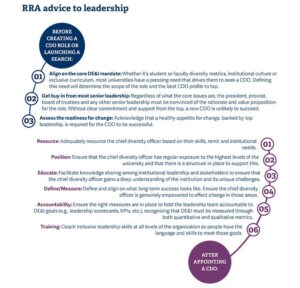 Executive search firms have become valuable partners to colleges in finding the right talent for the role. Here is a sampling of schools that have turned to search firms to find chief diversity officers from the Hunt Scanlon Media archives:

Academic Career & Executive Search (ACES) has placed Tasha Alston as the inaugural chief diversity and inclusion officer for the University of Pittsburgh-Bradford in Bradford, PA. Jennifer Muller, managing partner and senior consultant, led the assignment for the firm. “The University of Pittsburgh-Bradford required a committed, dynamic leader with a proven history of providing students with an inclusive and supportive learning and living experience,” said Ms. Muller. “With more than 20 years of experience as both an educational psychologist and a social worker, Dr. Alston has the vision to nurture and strengthen an inclusive, equitable, safe, and culturally responsive environment for all students, faculty and staff.”

Harvard Business School (HBS) has retained Isaacson, Miller to lead its search for a chief diversity officer. Partners Keight Tucker Kennedy and Ponneh Varho are spearheading the search along with senior associate Sonia Gomez. In September, the school announced the Harvard Business School Action Plan for Racial Equity, an ambitious effort to advance racial equity both within and beyond the school. This roadmap includes the school’s plan to hire a chief diversity officer, expand its case-study offerings on race and diversity issues, and recruit more Black students and faculty. “We hadn’t made the progress I had hoped we would make,” Nitin Nohria, dean of the school, told the Wall Street Journal. “Race needs its own independent focus.”

WittKieffer placed Franklin A. Tuitt as vice president and chief diversity officer of the University of Connecticut. Consultant Charlene Aguilar and associate Christine Pendleton led the assignment. “This is an essential position for any university, but especially for a great public university seeking to ensure a welcoming and vibrant intellectual environment for all of our students, faculty and staff,” said Thomas Katsouleas, president of UConn. “Reporting directly to me, Frank will serve as the university’s main strategist for efforts to define, assess and promote diversity, inclusion and opportunity at UConn and UConn Health. The value of diversity to a university cannot be overstated, but nor can it be merely an objective often discussed but never achieved.”