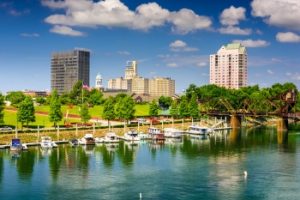 September 27, 2017 – Executive search firm Chason Group has been selected by the Augusta Economic Development Authority (AEDA) to lead the search for its next president. Tim Chason, the recruiter’s president, is spearheading the assignment. Walter Sprouse, who has led the authority since 2003, recently announced that he is stepping down effective Dec. 31.

The president is considered the CEO of the AEDA. The individual in that role is the key contact for new business prospects for the community, said the Chason Group. The president must also work with existing industries seeking expansion opportunities. The authority is seeking an experienced marketer who will be accountable for leading the development of a strategic plan for the community in terms of economic growth. Other responsibilities include budget oversight, developing a strong support staff and communicating with stakeholder groups about the programs and work of the organization.

The AEDA board wants a professional with a minimum of five years of executive experience in the economic and/ or community development arena, said the recruitment firm. The ability to establish an economic development strategy for the community and communication skills, it said, will be key to the successful candidate.

Augusta is Georgia’s second-largest and second oldest city. The region has become a major home to cyber security training and infrastructure development. The area is growing in the manufacturing sector as well as healthcare. The annual economic impact of nearly $1.4 billion goes directly into area shops, real estate, banks and other businesses.

The Chason Group, which is based in Cartersville, GA, specializes in executive-level searches for companies and non-profit organizations, strategic visioning plans, coordinating relationship building strategies, and building operating structures. Mr. Chason, who has over 30 years of experience in the business and non-profit world. He is a former Georgia Chamber of Commerce executive.

Past executive searches of the firm include: the president of North Georgia Community Foundation, president of Brunswick & Glynn County Development Authority, and vice president of economic development for the Cumming-Forsyth Chamber of Commerce, one of the top 10 fastest growing communities in the U.S.