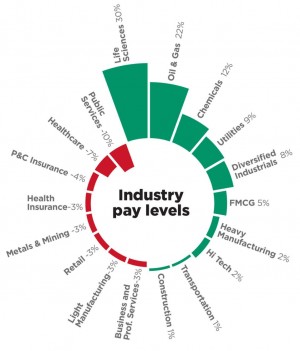 February 9, 2016 – Workers in the oil and gas, chemicals and life sciences industries out-earn their peers in other industries, according to new research by the Hay Group division of Korn Ferry. On the other end of the spectrum, employees in retail earn well below the average pay of their peers, when looking across all industries.

At the bottom end of the scale, the retail sector typically pays 12 percent below the average, while the construction and services industries both pay four percent less than the overall average.

“As global economies continue to grapple with weak consumer spending, it’s little surprise we see industries more reliant on hourly wage labor at the bottom of our ranking, worldwide,” said Ben Frost, a consultant at Hay Group. “Comparatively, industries where labor is concentrated in highly technical roles, including engineering and scientific functions, have fared much better as far as employee pay is concerned.”

In the U.S., the life sciences industry emerges at the top of the Hay Group analysis, paying 30 percent more than the average pay across all industries and title levels. Not surprisingly, recruiters feeding leadership to the sector say persistent talent shortages and the need to develop and retain employees with critical business and technology skill sets will continue to challenge global life sciences companies, driving up wages. Strategies for leadership, talent and human resources are undergoing dramatic change as a result.

On the other hand, public services, including state and federal government employees, mark the low end of the scale, typically paying employees 10 percent less than all industries. The healthcare industry pays seven percent less than the overall average, followed by property and casualty insurance (four percent below the average) and health insurance (three percent below the average).

“As on the global level, we’re seeing highly technical STEM-focused roles paying off for workers in the U.S., while government roles hold the bottom slot in our study,” said Mr. Frost. “On the healthcare, property and casualty insurance and health insurance side, these industries necessarily include a large number of administrative rolls, in claims processing and similar functions, which tend to drive down the overall pay levels seen in our analysis.”

According to the study, many industries see employee pay trend above the average more often for lower level staff than for more senior executives. For example, the chemicals industry typically pays clerical or skilled entry level staff 20 percent more than the all industries average, or about $55,460. Senior managers in the same industry, however, tend to make only five percent more than the average, or about $157,490. Similar trends emerge in the utilities, transportation, manufacturing, construction, metals and mining, and consumer goods industries.

“As overall pay increases at more senior levels, pay moves toward the norm across all industries, as each percentage point above or below becomes relatively more expensive,” said Mr. Frost. “At less senior levels, paying employees 10 percent or even 20 percent more than the average represents a smaller cost to employers than a 10 percent bump at the senior manager level.”

On a global basis, workers are expected to see wage increases of 2.5 percent, the highest in three years, according to a separate Korn Ferry Hay Group 2016 Salary Forecast study.

In Asia, salaries are forecast to increase by 6.4 percent, down 0.4 percent from last year. However, real wages are expected to rise by 4.2 percent – the highest globally. The largest real wage increases are forecast in Vietnam (7.3 percent), China (6.3 percent) and Thailand (6.1 percent). In fact, despite China’s economic slowdown, coupled with plummeting stock markets and reduced exports, workers in the country are set to see an eight percent salary increase in 2016 as employment rates continue to grow due to the sustained rise of a burgeoning Chinese middle class.

The outlook is positive in the U.K., France and Germany. While salary rises will stay at 2.5 percent in the U.K. (the same as the last two years), low inflation means that real wages are to increase by 2.3 percent in 2016 – above the Western European average. Workers in France and Germany are also forecast to see real wage rises of 1.7 percent and 2.7 percent. The picture is similar in Greece, where, despite economic issues, salaries are set to increase two percent (compared to 1.3 percent last year) with deflation leading to real wage rises of 3.4 percent expected in 2016.

This upward trend can also be seen in North America, where the labor market is buoyant. In the U.S., with low inflation (0.3 percent), employees will experience real income growth of 2.7 percent. Canadian workers will meanwhile see salaries increase by 2.6 percent and experience real wage growth of 1.3 percent. Across the continent, salaries will increase by 2.8 percent, the same as last year.

According to the annual hiring survey by DHI Group, Inc., 61 percent of respondents in the U.S. anticipate more hiring in the first half of 2016 as compared to the second half of 2015, a slight uptick from a year ago. In the next six months, 17 percent of companies surveyed plan to hire 30 percent or more professionals, up five percentage points as compared to when asked in 2014.

“We are experiencing one of the most active senior level recruiting markets in the 38 years I have been doing this,” said Peter Crist, chairman of executive search firm Crist | Kolder Associates. “It is manifesting itself in strong offers (higher cash + equity), and more counter offers. Every candidate we are chasing is being chased by someone else (i.e. PE, other companies, etc). Salary increases, in particular, are part of this. Everything triggers off the base (percentages of bonus/ equity payouts) and everyone is negotiating aggressively for higher base salaries.”

According to the most recent U.S. Bureau of Labor Statistics report, wages picked up significantly last month, a sign the job market could be tightening enough to force companies to pay more to attract and retain employees. The half a percentage point increase in average hourly earnings in January was a bright spot in a very positive labor report. The last six months were the best extended period for employee paychecks since the recovery began six and a half years ago.

“That gain in average hourly earnings is significant,” said Diane Swonk, an independent economist in Chicago. “Sustained increases are still needed to make up for years of stagnation, but it’s a move in the right direction.”