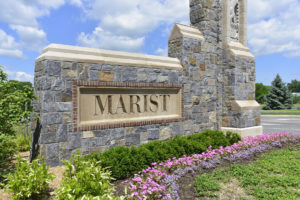 November 2, 2020 – Russell Reynolds Associates has launched the search for the next leader of Marist College, which included a virtual session with students to learn how they believe the school should move forward under the new president. David Yellen resigned from the role in mid-2019 after serving for three years. His predecessor, Dennis J. Murray, who had been president at the Poughkeepsie, NY college for 37 years, returned to the position on an interim basis. Leading the assignment for Russell Reynolds are Ann Coyle and Jett Pihakis.

Dr. Pihakis led the virtual input meeting. “The 11 students who attended the live session were able to share their opinions on the college and how they want to see Marist move forward under a new president,” said Marist College. Mr. Pihakis encouraged students at the beginning of the conversation to share their views openly and candidly.

“I am going to seek to learn as much as I can from the student perspective in terms of what is working well at Marist as well as what you feel needs to be improved upon,” he told them.  Dr. Pihakis asked the students how they would sell Marist to a potential presidential candidate. “I want to see a president who is aware of how we can have a positive impact in the community,” student body president Roda Mohamad told him. “I think that is something that drove me to come to Marist.”

Other students emphasized the personable culture at Marist. “It feels very welcoming from an interdisciplinary standpoint,” said senior Edison Hauptman. “The attitude that everyone has at Marist is that we are free to explore everywhere and I think that sort of culture is the thing I would brag about most.”

Ross Mauri, who heads Marist’s presidential search committee and services at chair of the board of trustees, said that after gathering input from the Marist community and drawing up a specification for the role, the search firm would commence recruitment efforts this fall, with interviews to take place over the winter. Finalist candidates should be presented to the full board for consideration and final decision in the spring. “It is our goal to have our new president in place no later than July 1, 2021,” said Mr. Mauri.

With campuses in Poughkeepsie and Florence, Italy, Marist College is a comprehensive, independent institution grounded in the liberal arts. Its mission is to “help students develop the intellect, character, and skills required for enlightened, ethical, and productive lives in the global community of the 21st century.” Marist educates more than 5,000 traditional-age undergraduate students and 1,400 adult and graduate students in 47 undergraduate majors and numerous graduate programs, including fully online MBA, MPA, MS, and MA degrees, and also doctor of physical therapy and physician assistant programs. Marist is consistently recognized by the Princeton Review, U.S. News & World Report and others.

Ms. Coyle, who is based in Boston, is a member of Russell Reynolds’ non-profit sector and education practice. She has more than 15 years of experience working in executive search for non-profit organizations and more than a decade focused on higher education. Ms. Coyle specializes in president searches at private colleges and universities. Ms. Coyle joined Russell Reynolds from a boutique executive search firm, where she was a partner in the higher education practice. Previously, she worked for a large international search firm, a boutique firm specializing in higher education, and another boutique firm specializing in serving nonprofit organizations. Anne has also served as director of admissions at the Yale School of Management and at Cornell University’s Johnson Graduate School of Management. She also worked in recruiting for McKinsey & Company. She began her career in New York City government and in the federal government in Washington, DC.

Dr. Pihakis is a key member of Russell Reynolds Associates’ education practice, and he has led the higher educa​tion group since 2018. For nearly 15 years, he served in leadership roles at top-ranked national and AAU research institutions, both private and public. He focuses on identifying senior academic and functional leaders within colleges and universities. Based in the firm’s Washington, DC office, Dr. Pihakis is also an active member of the firm’s diversity and inclusion and information officers practices. Prior to joining Russell Reynolds Associates, he served as vice president, programs at Management Leadership for Tomorrow (MLT). Before that, he was associate dean of the full-time MBA program at Georgetown University. He has also held positions at the University of California, Berkeley; Golden Gate University; and Vanderbilt University.