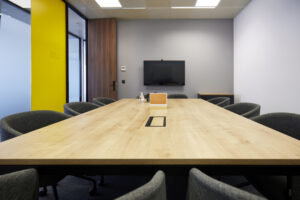 “Blue Ant was seeking a rare combination of digital transformation expertise and outstanding leadership and personal attributes in the media and entertainment space, and wanted us to put forward a deeply diverse set of candidates,” said Jay Rosenzweig, CEO of Rosenzweig & Company. “Blue Ant see diversity as critical to a successful board and wanted us to scour the market for the best candidates globally. They are at a genuine inflection point as a company, with truly extraordinary opportunities going forward, and the kind of complex board-level decisions that go along with that kind of vision.”

Ms. Hsia, an award-winning industry figure, has been a leader in digital transformation in the media sector and has been at the forefront of strategic moves in video streaming, websites, apps, E-commerce, social media, multiplatform programming, and emerging media. She grew revenue in digital media at NBC Bravo from a zero base to over $400 million across a range of mobile, social, video, and audio platforms. Ms. Hsia also has a longstanding commitment to promoting equity and inclusion in the media and entertainment space.

Previously, she served as a senior executive with NBC News, and as an executive producer with Dateline NBC and producer with Prime Time Live at ABC, following a successful, prize-winning period as a documentary filmmaker.

“We had a long wish list for this role,” said Michael MacMillan CEO of Blue Ant. “We were looking for a digital native, someone who has lived through the massive digital transformation that is happening in the media sector, and led major industry initiatives in the digital space; someone who had deep expertise in the U.S. television market with a major global player, and who had deep familiarity with international media markets. Our board works highly collaboratively, and we needed someone who was a good fit for that kind of environment. And we wanted someone with impeccable integrity and high ethical standards.”

“We didn’t necessarily believe at the outset of the process that we would be able to find someone who fulfilled all of these criteria, but Lisa manages to cover the list perfectly from our perspective,” said Mr. MacMillan. “Rosenzweig was able to bring us a short list of truly remarkable, diverse individuals, who each brought a different balance of skills, experience and personality to the table. We were spoiled for choice, and it was not an easy task to bring the group down to one.”

Mr. Rosenzweig, the founding partner of the firm, is an expert in designing, building and attracting world-class executive teams. He consults to public and private companies, including large global corporations, emerging growth to mid-sized businesses, professional services firms, and private equity and venture capital firms.