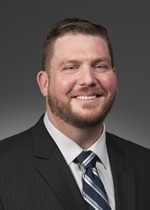 Louis Smith joined Kaye/Bassman in 2007 and has been one of the organization’s top producers in the Construction and Real Estate Development markets. He oversees the western United States Commercial Construction market assisting his clients with key leadership hires ranging from new sectors all the way to staffing entire construction projects.

Due to his diligence and commitment to providing his clients with top talent, Louis has received numerous professional awards and accolades, including Project Staff of the Year and the distinction of being named a Pacesetter within the organization. His professional success is credited to his deep understanding of people, culture and organizational dynamics. Louis’ clients include top national General Contractors, Consulting Engineering firms and boasts upper level placements with some of the largest privately held companies in the world including ENR Top 400 Commercial General Contractors and Consulting Engineering Firms.

Since joining Kaye/Bassman, Louis has specialized exclusively in the Construction Practice with a geographic focus in the western United States as well as on a national basis in many areas including Technical Building and Mission Critical Construction. Over the years, Louis has also successfully completed searches for Project Executives, Project Managers, Superintendents, Business Development and Estimators, amongst other searches. Louis graduated from Sam Houston State University with a Bachelor of Arts in Business Administration and Marketing. While in school, he played on the Sam Houston State Rugby Team for three years. Prior to Joining Kaye/Bassman, Louis held a regional position working with The American Federation of Labor and Congress of Industrial Organizations (AFL-CIO) working with various labor and political groups throughout the southern United States.