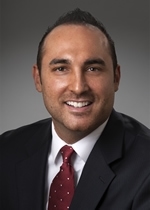 Nathan Courville joined Kaye/Bassman International in 2012 and has quickly become one of the company’s top producers. He oversees Kaye/Bassman’s Risk Management and Insurance division, which specializes in Acquisitions and Mergers. The team also successfully places of insurance professionals at various levels.

Nathan’s prevalent success lies in his innate ability to see what is forthcoming in the marketplace as well as his ability to increase the bottom line for organizations. He takes a consultative approach, both with his clients and candidates, that sets him apart from his competition in the recruiting industry.

His capabilities have led him to be awarded as “ Project Staff of the Year,” as well as qualified him for Kaye/Bassman’s top performer’s pacesetter trips. Nathan’s achievements are also reflected in his record breaking numbers. In 2014, he broke two of Kaye/Bassman’s quarterly records that were achieved both with his team and on his own. Nathan’s clients include large national insurance brokerages as well as smaller regional brokerages specializing in Commercial (P&C), Group Medical Life & Health, and Private Client Services.

He also has the ability to focus on TPA (MCO) and Carrier (Direct). Nathan has experience in building offices from scratch as well as building out a specific niche for companies across the U.S. Prior to joining Kaye/Bassman, Nathan had a wide array of experience from working in the oil and gas arena to holding a position as Vice President at a small employee benefit agency.

While in the insurance business, he realized his passion for the insurance industry and decided to transport that passion with him to Kaye/Bassman. His enthusiasm to seek out possibilities and his dedication to the business makes him an asset to the industry and his clients.