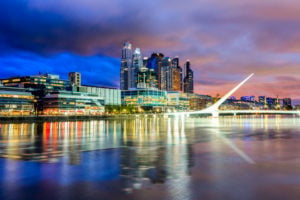 March 10, 2020 – New York-based Raines International recently opened a new office in Buenos Aires to serve as its Latin American headquarters and to strengthen the firm’s research and analytics team.

Buoyed by rich natural resources, a highly literate population, a diversified industrial base and an export-oriented agricultural sector, the economy of Argentina is Latin America’s third-largest, and the second largest in South America. It has a “very high” rating on the Human Development Index and a relatively high GDP per capita, with a considerable internal market size and a growing share of the high-tech sector.

Dan Smith, CEO of Raines, said the firm identified Buenos Aires as an ideal location for an additional office and continues to see opportunity for expansion. “In less than six months, we have built a team of extremely accomplished professionals who share our values and commitment to excellence in leadership and executive search, and we are dedicated to strengthening our team there this year,” he said.

Recently, Raines named John J. Keller to lead its innovation practice and assist clients in identifying and bringing innovative, transformational leaders to their organizations. A veteran recruiter and former journalist, Mr. Keller brings to Raines over two decades of search and advisory experience, recruiting transformational leaders to clients in the technology, telecommunications, digital/data and media industries.

Raines also announced that Matt Seiler, previously president of brand solutions with Dentsu Aegis Network, joined the firm in dual roles. Mr. Seiler serves as both managing director of the firm’s marketing and communications practice and as its first executive-in-residence. He splits his time between the firm’s Boston and New York City offices.

“Anyone who knows Matt knows he is an inspirational change agent who has lived his career on the leading edge of business innovation,” said Mr. Smith. “As ad agency strategist, he changed the trajectories of client companies by reinventing their advertising, marketing, and digital agendas. As president and CEO of the most respected global media agencies, Matt disrupted industry standards and inviolable business models while doubling firm revenues.”