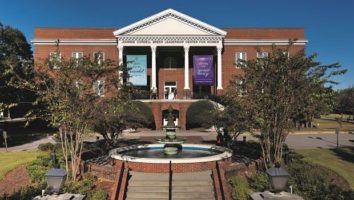 August 18, 2020 – R. William Funk & Associates, which specializes in recruitment for roles in higher education, has recruited William T. Bogart to become the 20th president of Columbia College in Columbia, SC. He succeeds Carol A. Moore who stepped down in March after four years in the top leadership role.

“As Columbia College transitions to its new coed status and expands its role in the Capital City, Dr. Bogart is well-positioned to lead the college into the future,” said Thomas C. Keith, board chair. “He has been an effective, innovative and collaborative higher education leader for 30 years. His academic focus on urban economic development will be valuable to the college and to the city of Columbia.”

Trustee, alumna and United Methodist minister, Rev. Tiffany Knowlin Boykin, said: “Dr. Bogart’s experience and achievements as a president for 10 years are impressive and will sustain the positive momentum at Columbia College,” she said. “His advocacy for church-related higher education is a harbinger of a stronger connection to the Annual Conference of the United Methodist Church in South Carolina. His genuine interest in students will be well received by current students and alumni.”

An accomplished academician, Dr. Bogart earned his undergraduate degree from Rice University and master’s and doctorate degrees in economics from Princeton University. He was a faculty member at Case Western Reserve University from 1990 to 2002, chief academic officer at York College in Pennsylvania from 2002 to 2010 and president of Maryville College in Tennessee from 2010 to 2020, where during his tenure, he led two strategic planning efforts to secure the largest gift in the college’s history while increasing annual fund giving by 40 percent.

Dr. Bogart said: “It is an incredible honor to join Columbia College. The mission resonates with me, with its emphasis on preparing students for personal and professional success and especially its focus on service, social justice and, leadership. Columbia College has the strength of identity forged from an undergraduate residential liberal arts core combined with the flexibility of graduate and online education to meet students where they are and serve their needs.”

Columbia College is a private liberal arts women’s college in Columbia, SC. Founded in 1854 by the United Methodist Church as a women’s liberal arts college, Columbia College also offers evening, graduate and online programs for women and men. The school said it will begin admitting full-time male students as early as fall 2021. The college in a statement said it began considering enrollment model changes in 2017 “to strengthen the college’s position.”