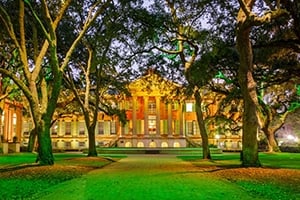 December 3, 2018 – R. William Funk & Associates, which specializes in recruitment for roles in higher education, has placed Andrew Hsu as the 23rd president of the College of Charleston in South Carolina. The school’s current president, 70-year-old Glenn F. McConnell, citing his age and health, announced that he will be retiring in July. R. William Funk, president of the Dallas-based recruitment firm, led the assignment.

“Dr. Hsu is an extraordinary individual – he is a scholar, a community builder, a fund-raiser and a visionary leader,” said David Hay, chair of the school’s board of trustees. “We were all impressed with Dr. Hsu’s experience, his accomplishments in forming industry partnerships, his commitment to diversity and his passion for the liberal arts. Over the course of the search process, Dr. Hsu has not only proven himself a great higher-education thinker, but also a great doer, with a track record of inspiring accomplishments across his career.”

Renee Romberger, who chaired the presidential search committee, said her team was inspired by Dr. Hsu’s intellect, understanding of the changing higher-education landscape and passion for the liberal arts. “Dr. Hsu will be a great fit at the college,” she said. “He is a world-class scholar and a visionary and transformational leader. I am looking forward to his leadership as we go into our 250th celebration.”

Board member Demetria Clemons said the candidate was well qualified for the role. “Dr. Hsu has an incredible academic pedigree, possesses a wealth of experience that will serve him well in this role and is incredibly passionate about representing the College of Charleston community,” she said.

Dr. Hsu, who most recently served as provost and executive vice president of academic affairs at the University of Toledo, will assume his new post next summer.  Earlier in his career, he was dean of the College of Engineering at San Jose State University.  He also served in various administrative and faculty positions at Wright State University, IUPUI, Purdue University and the University of Miami.  In addition, Dr. Hsu has experience in the government and private sectors, having worked with NASA and Rolls Royce.

“I think that it’s quite amazing for someone like myself who came to this country as an immigrant and was received with open arms to eventually achieve my own American dream of being a university president,” said Dr. Hsu. “This can only happen in America.”

The College of Charleston is a nationally recognized public liberal arts and sciences university. Founded in 1770, the school is considered to be among the nation’s top universities for quality education, student life and affordability. It has an enrollment of more than 10,000 undergraduates and about 1,000 graduate students.

R. William Funk & Associates has conducted more than 400 searches for university and college presidents and chancellors over the last 35 years. The College of Charleston search gives the firm what it calls the “superfecta” of president searches in South Carolina in that the current leaders at Clemson University, University of South Carolina and Winthrop University were all also placed by the firm.

Mr. Funk has been called the “guru of higher education recruiting” by the Chronicle of Higher Education and is listed as one of the 200 best executive recruiters in the world in the Global 200 Executive Recruiters: An Essential Guide to the Best Recruiters in the United States, Europe, Asia and Latin America.