Menu
View our Events
Stay Connected:
He was the ultimate leadership visionary who inspired leaders to navigate tough and often complex questions about themselves, their colleagues, and their organizations. Along the way, Egon Zehnder created a gold standard brand synonymous with integrity and discretion that has stood the test of time. 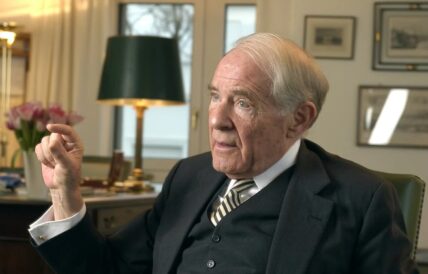 November 23, 2021 – Egon Zehnder, 91, founder of the global executive search firm that bears his name, has died in Zurich after a brief illness. Born on April 12, 1930, Dr. Zehnder graduated from Harvard Business School in 1956. In 1964, at the age of 34, he founded his own firm in a townhouse above Zurich. Initially, the company was composed of just himself and Brigitte Jentsch, who served as his assistant for 55 years. “What resulted nearly six decades on is a values-led management advisory firm synonymous with integrity, discretion, and loyalty,” said Scott A. Scanlon, CEO of Hunt Scanlon Media. “This firm is a case study in how strong values can be passed to subsequent generations,” he added.

“As you can image, we all gathered virtually when we received the news last week,” said Ed Camara, global chief executive officer of Egon Zehnder. “Apart from the many very personal stories that we have shared among us, one thing particularly strikes me: His legacy is that he didn’t implement values, he lived them with all his heart, with his professional identity and without compromise. That is his true legacy that lives on in our firm that bears his name.”

Indeed, from those humble beginnings in Zurich, the firm now boasts 525 consultants across 63 offices and 37 countries. Two of his five children, Peter and Andreas, count among them. “Egon Zehnder – the man and the firm – is the gold standard of leadership advisors,” said Christopher W. Hunt, president of Hunt Scanlon. “From the outset, Egon inspired leaders to navigate tough and often complex questions about themselves, their colleagues, and their organizations,” he said. “Today, we all talk about things like culture, and leadership assessment, 360-degree feedback, and competency, but it all started with this man. He was the visionary.”

Mr. Hunt said that Dr. Zehnder was also a kind and generous man with a great sense of humor. “When we started covering the executive search industry 33 years ago, Egon was one of the first to call, offering support and encouragement. Within a few years, he invited us to Zurich where we subsequently spent several days meeting with him, his colleagues, and selected Swiss clients who made the pilgrimage to see us in that famous villa in the hills above the city,” he recalled. “Egon had a passion for Americans,” said Mr. Hunt. “He connected with entrepreneurs. He loved what we were setting out to do, breaking new ground. He admired the American ‘can-do’ spirit. Optimism, he told us, will be your best friend in business.”

Mr. Hunt recalled setting up shop with Mr. Scanlon along with a photographer for a few days on the top floor of the townhouse, among all the boxed-up financial records of the firm. “Scott and I would arrive early in the morning, and Egon would always beat us in. He seemed to enjoy the solitude of the office at that hour, reading the morning newspaper while puffing a pipe at his desk before the quiet hum of activity started. It is an indelible image of a man who was part mystery and part legend.”

Aside from advising large international companies on their leadership and culture choices, Dr. Zehnder succeeded in carving a unique company pathway of his own – and he used it to set his fledgling firm apart from rivals. From the very beginning, he worked on a fixed fee basis rather than charging commissions for successful placements, which was the industry custom. He introduced a partner model – he never hired candidates from other competitors, but selected candidates from other professional fields and carefully trained them himself. All were highly educated, many with multiple degrees.

His boldest and most generous move came just 12 years after founding the firm, in 1976, when Dr. Zehnder surrendered his own majority shareholding to redistribute equity equally among the firm’s partners, creating a truly equal partnership that was unparalleled in the management consulting sector.

Years later, he went a step further when he returned all of his shares to the partnership and stepped away from his client work. His son Peter called the share give-back the “greatest and wisest act of his career.”

“This selflessness was characteristic of Egon, and it is his example that has enshrined generosity as a core value in our firm today,” said Egon Zehnder chair Jill Ader and Mr. Camara in a joint statement. “Our values are the principles we’ve inherited from Egon and that we continue to stand by with steadfast commitment.”

To his contemporaries, Egon Zehnder could be a fierce, but respected, rival. “Egon Zehnder was a giant in the search business,” said Russell S. Reynolds Jr., chairman and founder of RSR Partners. Mr. Reynolds founded Russell Reynolds Associates in 1969, one of five international search firms – including Egon Zehnder – that remain in the same roster some 50 years later. “He hired great people and had high standards,” he added. “I valued our relationship highly and always respected and admired him. His firm is a great legacy to a fine and able man.”

Another contemporary, Thomas J. Neff, chairman of Spencer Stuart U.S., remembered Dr. Zehnder as a leading light of modern executive search. “Our profession has lost one of its giants,” said Mr. Neff. “Egon pioneered executive search in Europe when he opened our Zurich office in 1958. He built a firm that has remained a most respected rival to this day.”

A longtime local Swiss competitor, Bjørn Johansson of Dr. Bjørn Johansson Associates AG, recalled Dr. Zehnder as a true entrepreneur. “He was also a very big U.S. admirer, which came about during his MBA studies at Harvard Business School in the 1950s,” said Dr. Johansson. He recalled that Dr. Zehnder wished to be different from the other executive search firms of the early modern era and that he succeeded, “in large part by bringing passionate professionalism, a focus on quality, and extremely high values” to his craft. “This is a great loss of one of our founding fathers,” he said.