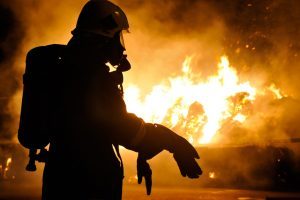 May 26, 2017 – For the first time in its 131-year history, Vancouver Fire & Rescue Services (VFRS) in Canada has gone outside its own ranks to find its leader. PFM Executive Search recruited Darrell Reid as the new fire chief and general manager for the City of Vancouver. He replaces John McKearney, who is retiring after 37 years in the job. Partners Allison Rzen and George Madden led the search.

Mr. Reid currently serves as CEO of the Heart and Stroke Foundation of Ontario. He has a well-established career in fire and emergency management services, including three years as a deputy chief with Toronto Fire Services.

He also served 21 years with Strathcona County Emergency Services in Alberta, which included five years as fire chief and director of emergency management. During that time, he was the incident commander appointed by the Province of Alberta for the Slave Lake fires in 2011 and two years later, the High River flood. Among his accomplishments, Mr. Reid founded a non-profit corporation dedicated to providing training and equipment to firefighters in developing countries. He also created Canada’s largest licensed private training academy for firefighters and paramedics.

The search for the leader of what is one of Canada’s largest emergency response organizations had input from many stakeholders. Among them, the Vancouver Firefighters Union and more than 150 members of the VFRS staff, who shared their perspectives through PFM’s facilitated search & selection process.

“I’m thrilled to welcome Darrell as Vancouver’s new fire chief, bringing decades of experience in fire and rescue services and emergency management,” said Mayor Gregor Robertson. “I’m confident that as chief, Darrell will make great progress in ensuring the safety of our residents by bringing the city’s emergency response and preparedness to the next level.”

Robert Weeks, president of the Vancouver Firefighters Union, said the union was optimistic about Mr. Reid’s hiring and looked forward to working with him. Mr. Reid starts as chief in three weeks. “We believe with Darrell we have a great opportunity to continue to build upon the recent positive labor relations strides that have benefited both members and the department,” said Mr. Weeks.

In a statement, Mr. Reid said he was honored to head Vancouver Fire and Rescue, and excited to “join a team with a tradition of excellence protecting a world-class city, and I look forward to helping find progressive and innovative solutions to the challenges we face.”

U.S. cities are also turning to search firms to find new leadership for their police and fire departments. Here’s a look at just a couple taken from the Hunt Scanlon Media archives:

Teri Black and Co. Heading Fire Chief Search
Teri Black and Company has been retained by the City of Santa Monica to lead its search for a new fire chief. Michael Earl, the city’s human resources manager, said the highest annual salary being considered for a new chief is $271,572.

Mr. Reid comes to Vancouver with the expectation that he will support and build upon the department’s strong tradition in fire and rescue services. As the leader of the VFRS and a member of the city’s corporate management team, he will be accountable for the effective and efficient delivery of fire suppression, first response, protection, education, prevention and safety services.

He will work with the VFRS leadership team to set and implement the strategic vision and plan for the department. In addition, he will have responsibility for the operations of 20 halls across the city, which employ more than 750 professional and administrative team members. Mr. Reid is also expected to work closely with a wide range of internal and external stakeholders.

Vancouver numbers 603,502 residents, according to the most recent census, making it the eighth largest Canadian municipality. With 2.4 million people, the Greater Vancouver area is ranked third most populous metropolitan area in the country.

Recruiter PFM, based in Vancouver, serves a wide range of industries. Its mainstay is senior level roles for private, public and not-for-profit organizations. Among the leaders that the firm has recruited for non-profit organizations are: the CEO for Creative BC, the executive director of Integrated Health Services, CEO for Fraser Health Authority, the chief medical health officer for Northern Health Authority, the chief financial officer at Capital Regional District and the CEO for the Canadian Breast Cancer Foundation.

Ms. Rzen has more than 14 years of experience in executive search and works with an array of clients in the public and private sectors. She knows Vancouver well, having worked as a coordinator for convention services for the Greater Vancouver Convention and Visitors Bureau.

A 20-year veteran of the executive search industry, Mr. Madden’s professional accomplishments in communications, public affairs and management have made him a well-known figure in Canada’s business world. Clients say he has a unique talent for parlaying his deep understanding of business and ability to distill complex client objectives into measurable goals and results.