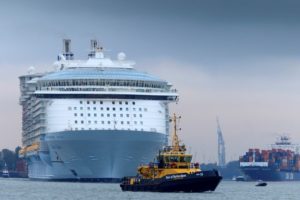 “The association’s executive committee is pleased to have found an outstanding individual to assume leadership of this hemisphere-wide association representing seaports,” said William Friedman, AAPA chairman and CEO of the Port of Cleveland. “Chris Connor has a track record of transformational leadership in the ocean shipping industry. This, combined with his deep industry knowledge and institutional tenure, makes him uniquely qualified to lead AAPA successfully into the future.”

Mr. Connor is the former global CEO of Wallenius Wilhemsen Logistics (WWL). He joined WWL in 1994 and held several key commercial and operational positions prior to being named CEO in 2013. Before joining WWL, he worked for Crowley Maritime Corp. for seven years, and United States Lines for six years. During his more than 35 years in ocean shipping and logistics, Mr. Connor has worked and lived in Asia, Europe, as well as the U.S.

“I’ve spent over 35 years working in the ocean shipping industry and through that lens I’ve developed a deep appreciation and respect for the vitally integral role that ports play in global commerce,” said Mr. Connor. He added that he is eager to leverage the “economic impact and energy” of the port industry.

AAPA is the unified voice of the seaport industry in the Americas, representing more than 130 public port authorities in the U.S., Canada, the Caribbean and Latin America. For more than a century, AAPA membership has empowered port authorities and their maritime industry partners to serve global customers and create economic and social value for their communities.

The U.S. wing of the firm, launched in 2011 under the direction of CEO Steve Potter, has become one of the fastest growing search firms in the Americas. Odgers Berndtson has U.S. offices in Atlanta, Austin, Boston, Chicago, Dallas, Denver, Houston, Los Angeles, Miami, Minneapolis, New York, Philadelphia, San Francisco and Washington, D.C.

Prior to Odgers, Mr. McNamara held global leadership roles with three international search firms and formerly was with Booz Allen Hamilton’s Applied Science Center. Earlier in his career, he represented American, Danish, French, German and Mexican companies in the global engineered logistics sector. Mr. McNamara was knighted in 1989 by Queen Margrethe II of Denmark in recognition of his service to the country. He has also been named to BusinessWeek’s Top 100 World’s Most Influential Headhunters.