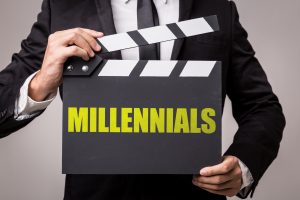 May 9, 2018 – Deemed the ‘giving generation,’ Millennials can be one of the non-profit world’s most valuable assets. Sixty percent of Millennials want a sense of purpose in their work and 77 percent chose their job based on that desire, according to the ‘Deloitte Millennial Survey.’ These factors create the perfect environment for non-profits to attract, hire, and retain Millennials workers.

Meanwhile, one of the fastest growing sectors within executive search today can be found in non-profit. Presently, close to 150 recruiting firms specialize in some form of talent acquisition in this sector, which includes foundations, cultural institutions, and academia, to name a few.

With that said, non-profit search specialist Koya Leadership Partners recently acquired New York-based recruitment firm ReWork and its sourcing platform technology in an effort to attract more Millennial candidates. ReWork co-founder and CEO Abe Taleb joined Koya as a vice president, where he will help to expand the firm’s focus around the Millennial workforce.

“The world would be a better place if the best thinkers and doers of each generation defined their success not only based on the pay or prestige of their jobs, but on how big an impact they can make in the world,” said Katie Bouton, Koya founder and CEO. “We’re thrilled to collaborate with Abe, who brings best-in-class knowledge and experience around attracting, recruiting, engaging, and placing talented Millennials.”

As a tech-forward company, Koya will leverage ReWork’s innovative technology to engage with candidates more deeply around their social mission and desired impact in the world. Additionally, Koya will use their new technological capabilities to broaden their network of potential candidates, particularly with Millennials. Koya’s leadership believes that technology will play a critical role in the recruitment process in the coming years, and this new acquisition will help Koya remain a recruiting front-runner as the industry continues to evolve. 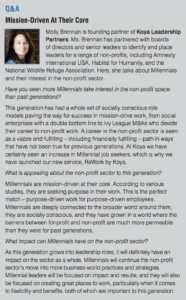 “Abe truly understands what motivates Millennials, how to excite and engage them, and how they have an unwavering commitment to social responsibility,” Ms. Bouton said. “He’ll be instrumental in helping us attract and place a new generation of emerging leaders into roles that will fuel their passion for social change and allow them to make a positive difference in the world.”

Koya recognizes there will be a massive leadership swing ahead as Baby Boomers in high-level positions retire with too few Gen Xers to fill these important senior roles. The firm says it is committed to grooming and placing Millennial talent for a new generation of leaders to fill these top positions as they become available.

“With this unique market opportunity, Millennials are looking at jobs differently than previous generations have,” said Mr. Taleb. “If Millennials aren’t challenged and engaged in their job, they’ll move on. They’re looking for more than just a salary – they want meaningful work at companies that are committed to social responsibility as well as diversity in the workplace.”

Mr. Taleb previously served as a co-founder and CEO of recruiting firm ReWork, where he used an innovative blend of technology and search process to recruit top Millennial talent to mission-driven work. He has placed leaders at Acumen, Third Sector Capital Partners, NationSwell, Code2040, and many more mission-driven organizations.

ReWork’s co-founders, Nathaniel Koloc, now the senior vice president of people for Future Laboratories, and Evan Walden, current CEO of Monday, are say they are grateful to have found a collaboration with Koya, “whose values, mission and culture align so closely with ReWork’s.”

“ReWork’s expertise and technology directly support Koya’s vision to serve the next generation of mission-driven talent,” said Mr. Walden. “We feel grateful to have found such a great fit.”