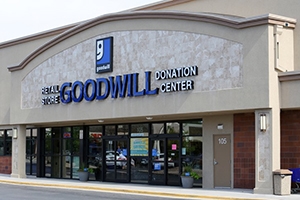 “Nicole Suydam is the ideal candidate to lead Goodwill of Orange County into their next stage of growth,” said Mr. Bull. “Her past experience with the organization, coupled with the outstanding results she and her team have realized at Second Harvest Food Bank, puts her in a great position to create quick traction at Goodwill.”

“When the largest non-profit (by revenue) in Orange County is adding a new CEO, the outcome is extremely important to the entire community, especially for those who Goodwill serves so well,” said Mr. Black. “Nicole Suydam is the perfect leader to take Goodwill into the future. We are so proud to have helped make this possible.”

Since 2012, Ms. Suydam has served as CEO of Second Harvest Food Bank of Orange County. Last year, she oversaw the distribution of more than 25 million meals to families and individuals as she guided a vast network of more than 200 community partners who collectively distribute food to those in need and work toward ending hunger in Orange County. Under her leadership, Second Harvest this year earned Charity Navigator’s highest rating for fiscal responsibility and effectiveness for the first time. Prior to her tenure at Second Harvest, Ms. Suydam served as vice president of development at Goodwill of Orange County.

“Having previously worked at Goodwill of Orange County, I have a deep appreciation for and understanding of the critical work the organization is doing to change and enhance the lives of thousands of individuals facing barriers in Orange County,” Ms. Suydam said.  “I’m thrilled to return to the organization in this capacity with new insight and experience under my belt. I look forward to working with the leadership team and board of directors to establish Goodwill’s vision for the future and make a positive impact on our community.”

McDermott & Bull, founded in 2001, is now the 29th largest executive search firm in the Americas, where it serves clients in the technology, financial services, manufacturing, biotech & life sciences, retail and professional services sectors. Since the advent of MB Interim Leaders in 2011, McDermott & Bull has served both the permanent and interim needs of its clients.

Mr. Bull is a co-founder of the firm. In addition to leading a team of executive search consultants, he has built his own executive search practice catering to a variety of clients, including Experian, First American Financial, Fluidmaster, Kelley Blue Book, SC Fuels, Thomas James Capital Homes, Trojan Battery, Union Bank and Vizio, among others.