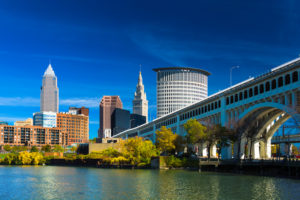 March 12, 2021 – Korn Ferry recently recruited Baiju R. Shah has been named President and CEO of The Greater Cleveland Partnership (GCP). He will succeed Joe Roman, who will retire April 30, 2021. “We are grateful to Joe for his decades of impactful leadership and his many accomplishments. He leaves GCP in a very strong position with great momentum,” said Eric Schnur, GCP board chair and chairman, president and CEO of Lubrizol. “We are also thrilled to welcome Baiju Shah as GCP’s next CEO.  We are certain Baiju’s capabilities, experience and relationships will continue to move GCP and Cleveland forward. Baiju is a visionary leader with deep experience in economic development and innovation and a history of strong collaboration. We believe he is the perfect leader for GCP at this time of great opportunity and promise for our city and our region.” Korn Ferry solicited input from over 125 stakeholder leaders from across the region for input into the candidate description, including the GCP board and senior staff; CEOs of large and small local companies; economic development and civic partners; and city and county elected officials, among others. Korn Ferry conducted a nationwide search that yielded a final candidate pool that was rich and diverse in talent, backgrounds, gender and race. In the end, the Search Committee unanimously recommended Shah for the position.

Mr. Shah comes to GCP from his current position as the Steven A. Minter senior fellow for innovation at the Cleveland Foundation, where he develops and works on strategic initiatives and partnerships designed to advance Cleveland’s innovation economy. He is the leader of the Cleveland Innovation Project (CIP), created by GCP in partnership with the Foundation, Fund for Our Economic Future, JumpStart and TeamNEO. CIP aims to establish Cleveland as a leading Midwestern region for technology-led growth and inclusion by 2030. Mr. Shah also serves on the foundation’s social impact investment committee. He will continue to lead CIP in his new role with GCP. From 2012 to 2019, he served as CEO of BioMotiv, the Cleveland-based company aligned with the Harrington Project for Discovery & Development, a $380 million U.S. and U.K. initiative geared to accelerate breakthrough discoveries into medicines. From 2002 to 2012 he was the president and CEO and a founding executive of BioEnterprise, a business formation, recruitment and acceleration initiative designed to support growth-stage bioscience companies in Northeast Ohio. Mr. Shah was also the founding Board Chair of Global Cleveland. He started his business career as a consultant at McKinsey & Company..

As a native Clevelander, Mr. Shah is passionate about the inclusive economic growth of Greater Cleveland. Throughout his career, he has demonstrated a collaborative, partner-oriented operating philosophy and a strong commitment to diversity, equity and inclusion. He has experience working with governments, businesses and non-profits, and has attracted funding from public, corporate, philanthropic, venture capital and private equity investors. Mr. Shah is a director of Invacare and Athersys and serves on the boards of Destination Cleveland and Global Cleveland. He has been named an Ernst & Young Entrepreneur of the Year and recognized as one of Cleveland’s most influential leaders. Mr. Shah received a juris doctor degree from Harvard Law School and a bachelor of Arts degree from Yale University.

“I am honored to be chosen as the next CEO of the Greater Cleveland Partnership,” said Mr. Shah. “As the primary association for our businesses to focus on economic development issues, GCP presents a unique and powerful platform to enhance the prosperity of our region and its residents. I look forward to working with the GCP team and its many business, nonprofit and civic partners to build on the momentum that Joe and GCP have generated over the years.”

Korn Ferry is a Los Angeles-headquartered executive recruiter and leadership consultant and the largest globally and in the Americas as ranked by Hunt Scanlon Media. The firm’s 8,600 colleagues serve clients in more than 50 countries.