Menu
View our Events
Stay Connected:
The number of Americans applying for unemployment benefits last week fell to its lowest level in 52 years as the U.S. job market continues to show strength in the midst of rising costs. According to ManpowerGroup strong hiring optimism continues into the second quarter of 2022. Let’s take a closer look! 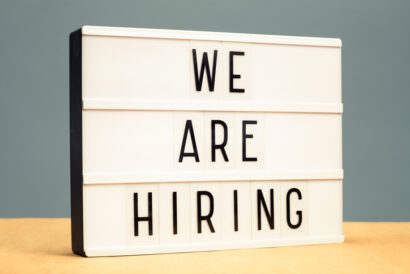 “Right now, U.S. cases are in the sweet spot between the bottom of the initial Omicron wave and the impending explosion in BA.2 cases, but this probably won’t last long,” Ian Shepherdson, chief economist at Pantheon Macroeconomics, wrote in a note. “Our bet … is that the coming BA.2 wave will trigger a modest but visible pull-back in the discretionary services sector, thereby dampening consumption in the first month of the second quarter.”

Federal Reserve chair Jerome Powell reiterated his assessment of the labor market’s strength earlier this week, just days after calling the current job market “tight to an unhealthy level” in his post-Fed meeting press conference last week. “The labor market has substantial momentum. Employment growth powered through the difficult Omicron wave, adding 1.75 million jobs over the past three months,” Mr. Powell said in a speech Monday. “By many measures, the labor market is extremely tight, significantly tighter than the very strong job market just before the pandemic.”

“Demand for labor remains strong, apparent in the near-record levels of job openings which are far outpacing the number of unemployed in the economy,” Rubeela Farooqi, chief U.S. economist at High Frequency Economics, said in a research note. “That should keep layoffs low, for now.”

Strong hiring optimism continues into the second quarter of 2022, according to the Q2 ManpowerGroup Employment Outlook Survey of 41,000 employers. Employers in 36 of 40 countries report stronger hiring intentions than this time last year with greatest demand in IT, finance, and manufacturing. Demand for skilled workers remains at record highs as employers seek to attract and retain the best, diverse talent as employers embrace the post-pandemic era.

EMEA: Employers report positive hiring intentions in 22 of 23 countries during the next three months. The only negative outlook is reported by employers in Greece. Year-over-year hiring sentiment improves in 20 and declines in only three countries, Greece, Poland, and Romania. The strongest improvements reported in Sweden (+38 percent), Netherlands (+36 percent) and Belgium (+34 percent); weakest in Greece (-two percent), Poland (-five percent) and Romania (-seven percent). In France and Germany, Paris (+25 percent) and Munich (+33 percent) report some of the most optimistic City outlooks in the region, driven by employers in IT and Finance.

North America: Both U.S. (+35 percent) and Canada (+37 percent) report strong hiring levels for Q2 2022. Employers in Canada report a slightly stronger outlook than last quarter (+two percent), while the U.S. shows a small decline for the second quarter (-six percent). Hiring managers in both countries expect hiring to be significantly stronger compared to intentions year-over-year, +27 percentage points in Canada and +16 in the U.S. In the U.S., employers report the strongest outlooks (+51 percent), those in education, health, social work and government (+27 percent) report the weakest.

Central & South Americas: Positive hiring intentions are forecast for all eight countries in South and Central America during Q2 2022. The strongest hiring plans are reported in Brazil (+40 percent) then Colombia (+38 percent); weakest in Argentina. Compared with previous quarter, seven countries see intentions weaken, while Panama shows a small increase (+two percent percentage points). The outlook in the region has improved 40 points when compared with the previous year, and 22 points since last quarter.

APAC: In all seven Asia Pacific countries and territories employers report positive and improved hiring intentions for the next three months. The strongest hiring plans are reported in India (+38 percent) Australia (+28 percent) and China (+28 percent), while the weakest hiring plans are expected in Japan (+six percent), Taiwan (+seven percent) and Hong Kong (+nine percent). In addition, the hiring sentiment strengthens in China and Singapore compared to Q1 and weakens in Japan, Taiwan, Australia, New Zealand, India, and Hong Kong.