Stay Connected:
The jobs economy continues to show sluggish signs of improvement as many businesses slowly return to normal. Let’s take a look inside the Labor Department’s just released numbers. 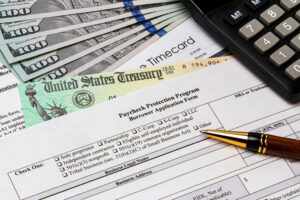 September 7, 2021 – Employment rose by 235,000 in August as the U.S. unemployment rate fell to 5.2 percent, according to the most recent U.S. Bureau of Labor Statistics report. So far this year, monthly job growth has averaged 586,000. In August, notable job gains occurred in professional and business services, transportation and warehousing, private education, manufacturing, and other services. Employment in retail trade declined over the month. The number of unemployed persons edged down to 8.4 million, following a large decrease in July. Both measures are down considerably from their highs at the end of the February-April 2020 recession. However, they remained above their levels prior to the coronavirus (COVID-19) pandemic (3.5 percent and 5.7 million.

Among the unemployed, the number of permanent job losers declined by 443,000 to 2.5 million in August but was 1.2 million higher than in February 2020. The number of persons on temporary layoff, at 1.3 million, was essentially unchanged in August. This measure was down considerably from the high of 18 million in April 2020 but was 502,000 above the February 2020 level. The number of reentrants to the labor force increased by 200,000 in August to 2.5 million In August, the number of persons employed part time for economic reasons, at 4.5 million, was essentially unchanged. There were 4.4 million persons in this category in February 2020. These individuals, who would have preferred full-time employment, were working part time because their hours had been reduced or they were unable to find full-time jobs.

“While it looked like a gradual return to normal was on the horizon, rising COVID-19 infection rates are fostering hesitancy among jobseekers, pushing back return-to-work plans and causing job growth to stagnate,” said Michael Smith, global CEO of Randstad Sourceright. “Especially as federal unemployment benefits expire for millions of workers; employers must look to how they can attract individuals who may be reluctant to re-enter the workforce.”

“Utilizing contingent workers rather than solely relying on full-time hires can be a prudent approach for many organizations in both the short- and long-term, while improved compensation and the ability to work from home can be huge selling points for many employers looking to entice workers back into the labor force,” Mr. Smith said. “Additionally, the successful adoption of remote work during the pandemic should serve as a reminder to organizations that they can recruit talent who may not live geographically close to their office.”