Menu
View our Events
Stay Connected:
As the economy slows in response to high inflation and rising interest rates, employers will be more likely to slow the pace of hiring after Q2. Is the window closing on good times? 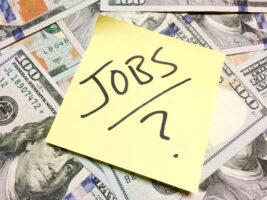 The government is expected to report on Friday that nonfarm payrolls increased by 391,000 jobs in April after rising 431,000 in March, according to a Reuters survey of economists. Job growth has exceeded 400,000 for 11 straight months.

“Let’s just say that this was the softest report since employment came off the pandemic/lockdown low in April 2020,” said David Rosenberg, president and chief economist of Rosenberg Research. “The small business sector is the leading indicator at turning points because it is in the weeds, at the ground level, when it comes to identifying what is really happening in the economy,”

“With job openings and quits at a record high, employers will keep layoffs to a minimum. Even as the economy slows in response to high inflation and rising interest rates, we expect employers will be more likely to slow the pace of hiring than to let go of workers,” economists with Oxford Economics said.

“The labor market appears to be moving past the pandemic, rapidly closing in on a complete recovery,” Rubeela Farooqi, chief U.S. economist at High Frequency Economics, wrote in a note. “Even as the labor market is tight, suggesting optimism about economic conditions, a four-decade high in prices is tempering expectations. Even as consumer balance sheets are healthy and virus concerns are fading, there are downside risks that could weigh on household and economic activity more broadly going forward.”

A separate report from global outplacement firm Challenger, Gray & Christmas on Thursday showed job cuts announced by U.S.-based companies increased 14 percent to 24,286 in April. The second straight monthly increase in layoffs was led by the leisure and hospitality industry.

“Job cut plans appear to be on the rise, particularly as companies assess market conditions, inflationary risks, and capital spending,” said Andrew Challenger, senior vice president at Challenger, Gray & Christmas. “Workers who are being cut will have lots of opportunities and will likely land quickly.”

The rise in layoffs was in sync with the ADP National Employment report on Wednesday, which in April showed the smallest private payrolls gain in two years as employment at businesses with less than 50 workers fell. The leisure and hospitality sector added the fewest jobs since late 2020.