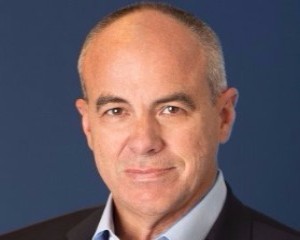 April 26, 2018 – The sports industry is changing, and the need for talented senior-level executives who can stimulate innovation is in heavy demand. It is a fairly new recruiting concept for some search firms. For others, the transition has been seamless.

One of these go-to search consultants is Sucherman Group CEO Erik Sorenson. He is well-versed in media strategy, business trends and – so important in an ever-changing sports landscape – future developments.

Mr. Sorenson started out in radio, but moved to television and became executive producer of “CBS This Morning” and “CBS Evening News with Dan Rather.” He received more than 20 Emmys and capitalized on his extensive contacts and impressive resume to make a smooth conversion to executive search.

He said that a limited amount of experienced candidates who realize that sports is almost as popular for what occurs away from the field has increased the demand for search firms who fully understand how to serve that sector. The best recruiters, he said, know where to look and who to target for prime assignments.

“Sports is entertainment on the professional level, and, increasingly, because of social media and video, it is almost impossible to separate a professional sports team from media,” said Mr. Sorenson. “We have a lot of business in the marketing area, in video production, media strategy.”

Because of its commitment to entertainment, Sucherman Group does not conduct searches for coaches and executives on the player personnel side. 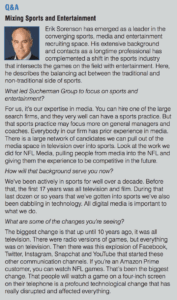 “We’re helping teams on the business side of the operation with marketing and social media,” said Mr. Sorenson. “We’re a boutique, so we’re very specialized and focused on media and entertainment and sports. It’s been fortuitous for us that since (the rise in popularity in sports executive search) coincided with us putting our toe in the water, things have really taken off in the last decade.”

Sucherman Group has a longstanding business relationship with MLB’s New York Mets through SNY, the official television home of the Mets, NFL’s New York Jets and University of Connecticut athletics. Sucherman Group chairman Stuart Sucherman sits on the board of SNY and he’s been advising SNY since before its inception, said Mr. Sorenson. “He’s also working with the leadership of the (Mets) to help them craft their media strategy.”

NFL Media (which owns NFL Network) is another major sports client for Sucherman Group, according to Mr. Sorenson, who said teams are trying to effect a message and benefit from their engaged fans who not only follow their favorite teams and players on the field, but also follow them through various forms of media.

“Over the last two years, it’s been a series of placements that we’ve done for them that’s been productive for both sides,” said Mr. Sorenson. “The Mets and NFL Media are two really good examples of professional sports operations that are taking ownership of media with (pay) channels and also mobile and digital distribution of their content.”

However, Mr. Sorenson cautioned the tide could turn in the sports industry.

“I think it’s going to be survival of the fittest,” said Mr. Sorenson. “It’s not money growing on trees, that’s for sure. All the sports leagues are going to be challenged in the next decade as millennials grow older and don’t watch the games as much because of the expanding choices they’ll have through technology.”

Mr. Sorenson said there are no such worries at Sucherman Group.

“We’re fully engaged. We’ve got a full slate of searches going on,” he said. “From digital companies on the West Coast, to traditional television companies in New York, to sports franchises. It’s not good for everybody, but it’s good for us.”