Menu
View our Events
Stay Connected:
Leading search consultants from Korn Ferry say the troubled economy is shifting the dynamic between employees and companies faster than anticipated. How much will change? Let’s take a closer look. 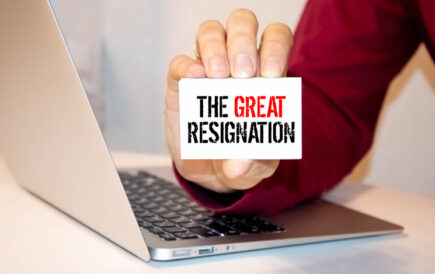 June 24, 2022 – Not long ago—as recently as last month—job hunters seemed to have all the leverage. Nationwide, there were nearly two open jobs for every unemployed person. In some markets the ratio was closer to 3:1. The economy beat expectations and added 390,000 jobs last month. The country’s unemployment rate also remained at 3.6 percent, an ultralow level that is nearly where it was right before the pandemic struck more than two years ago. But interest-rate hikes, a significant stock market decline, and the growing possibility of a recession—according to many economists and corporate leaders—have dented the confidence of many would-be job seekers. “The Great Resignation feels like it’s coming to a halt,” Brian Bloom, Korn Ferry’s vice president of global benefits, said in a newly released report.

The pace of new job postings has slowed on various online job sites. According to the Korn Ferry report, early indications suggest that companies are pulling back on filling open slots. Major retailers have said they are thinning employee ranks through attrition, and some tech firms are actually laying off staff. “Candidates have noticed the change, and it’s made some reconsider whether or not they want to make a move,” said David Vied, global sector leader of Korn Ferry’s medical devices and diagnostics practice. “Now that they can’t get five offers overnight, some are doing a little circumspection.”

It’s a rapid reversal from much of the last 18 months, during which it felt like employees of all levels were in the driver’s seat. Corporate executives were scrambling to come up with ways to win over candidates and keep existing employees. To curtail the Great Resignation, companies offered better benefits, considerably higher salaries, hefty spot bonuses, flexible scheduling, remote work options, massive counteroffers, and bigger commitments to environmental sustainability. Few requests from prospects could be rejected outright, it seemed, according to the Korn Ferry report.

A separate report from Korn Ferry found that the go-to move to keep employees for most companies was to pay more. Those other solutions, however, often take time to implement. “Increasing wage rates isn’t a silver-bullet solution, but lots of organizations go there because it’s very visible,” said Tom McMullen, Korn Ferry’s leader in its North America total rewards expertise group.

At the same time, a pay boost might not do much for winning over employee loyalty. “The delight of an increased paycheck usually lasts about two pay periods,” said Benjamin Frost, a solutions architect in Korn Ferry’s products group who works with companies on compensation issues. “People want to be paid fairly, but they also want to have meaningful assignments, work in a healthy culture, and see opportunities for development.”

Pushing Back on Worker’s Wishes

However, the job market is still quite good and will likely be for years to come with many highly specialized employees remaining in high demand. Korn Ferry notes that now companies are starting to push back on some worker wishes, exorbitant and otherwise. Requests for doubling of existing salaries are, once again, being routinely denied. “And whereas some clients were letting new recruits work remotely full-time, now they are insisting those new employees work on-site at least some of the time,” said Jacob Zabkowicz, vice president and general manager of Korn Ferry’s Recruitment Process Outsourcing business. “Companies aren’t necessarily committed to filling all of their open roles, either.”

If you’re thinking about joining the Great Resignation and quitting your job, you’re in good company. Resignations are at a 20-year high, and depending on what study you’re reading, one-third to one-half of all U.S. workers are considering leaving their jobs right now. This record number of resignations is fueled by a range of factors, from the understanding that better pay and opportunities may be readily available, to a desire to work for an organization that is more values-aligned, to the desire to have more flexibility about when and where work is done.

“Burnout is also a significant factor that’s driving employees to seek other opportunities,” said Molly Brennan in a new report from Diversified Search Group | Koya Partners. “If you recognize yourself in any of these factors and are considering taking action, you’re likely to find yourself in a good position. The number of open opportunities has created stiff competition for talent, driving up salaries and giving candidates an advantage when it comes to negotiations.”

“An increasing number of leaders are saying that if the company has been operating reasonably well for a year with a particular role open, then perhaps the company can do fine without that role at all,” said Mr. Vied.

“Ironically, it’s some of those generous, recently handed-out benefits that are raising red flags for some candidates,” said Mr. Bloom. “Someone who switches employers now to take advantage of a big salary bump may worry that they will be among the first to be laid off if the economy goes south.”

Experts caution, however, that companies can’t assume they’ll be able to roll back a lot of post-pandemic benefits. Korn Ferry points to remote work—a contentious issue for many leaders—as a prime example. “CEOs will need to offer reasons well beyond ‘because I said so’ to draw employees back to the office,” said Jamen Graves, global co-leader of Korn Ferry’s CEO and enterprise leadership development practice. “There are millions of workers who have had to figure out how to be highly productive working remotely. If you are now asking them to come into the office, there needs to be a compelling reason.”

“Companies across industries might not have to offer 20 percent to 30 percent raises to stay competitive,” Mr. Zabkowicz said. “But if they want to keep top talent, they’ll need to shell out more than the three percent to five percent raises many doled out for the past decade. At the same time, companies shouldn’t roll back some of the modifications they made during the last two years to speed up their hiring processes. Speed is still king, and companies need to focus on their brand and image as employers.”

Related: How to Prepare Candidates for a Successful Resignation