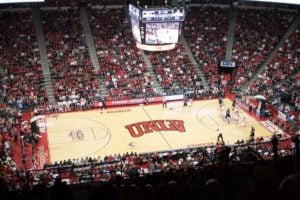 March 27, 2019 – With NCAA college basketball’s “March Madness” in full swing, some schools that have been left on the sidelines are looking to find new coaches to help their teams climb back into the competition. The University of Las Vegas, Nevada (UNLV), for one, recently enlisted executive search firm Fogler Consulting to lead the search for its next men’s head basketball coach.

The search comes on the heels of the firing of Marvin Menzies earlier this month. In three years of leading the UNLV program, Mr. Menzies’ teams had a record of 48-48. “Quite simply, our men’s basketball program needs to win more than we have, and when we look ahead to next season, I’m not bullish on seeing significantly better results,” athletic director Desiree Reed-Francois told the Las Vegas Review Journal. “Basketball is an integral part of UNLV’s identity, and our success or failure in men’s basketball impacts so many areas of the university and athletics department — national brand, applications, ticket sales, financial stability.”

UNLV’s athletic director also told the Las Vegas Review Journal that sufficient dollars have been allocated for UNLV to land a top coach. In discussing potential salary, she said that UNLV expected to pay near the top of the schools in the Mountain West Conference and in the upper echelons of the Group of Five and beyond.

Fogler Consulting, based in Elgin, SC, will receive $20,000 per month out of UNLV’s general athletics budget with a two-month maximum, said the newspaper. Fogler’s fees can vary from assignment to assignment depending on what services the colleges choose. Some schools, said the Review Journal, enlist Fogler Consulting for background checks only or the firm can be more involved in interviewing candidates.

The search firm is led by Eddie Fogler, a former National Coach of the Year with 30 years of Division I coaching experience. Among the schools that have used Fogler in recent years is Colorado State University, one of UNLV’s rivals in the Mountain West Conference. “You want to get good advisement, but you also want to get a great value,” Joe Parker, athletic director at Colorado State, told the Review Journal. “In the space of basketball, I don’t think you can really beat Eddie. He’s not a comprehensive search firm by any means. He doesn’t position himself in that manner, so he doesn’t have all the trailing infrastructure of other firms that help you and do a good job with advisement in that area, but he does it in a way that’s much more efficient. It’s because his practice focuses solely on basketball.”

One of the benefits of using a search firm, such as Fogler, as opposed to a public university conducting its own search, is that the search firm is not subject to public record requests. Therefore, candidates’ names are not revealed, saving the coaches potential embarrassment with their current schools.

“You don’t want to do that to anyone,” Mr. Parker told the Review Journal. “They’re committed to their current roles, and they’ve got obligations to their existing campuses. You don’t want to create any uncomfortable situations with people that have to go back and explain why they had an interest in an opportunity.”

Fogler Consulting was established in 2006. Since then, universities and colleges have turned to Mr. Fogler for insight into the world of collegiate basketball coaching, and for top talent. Since launching his business, he has placed more than 30 college coaches across the nation at all levels of Division I basketball in an unusual search specialty that seems to have high growth potential. A review of just some of Fogler Consulting’s clients reads like a Who’s Who of leading American colleges and universities: Vanderbilt, Boston College, Ohio State, Texas Tech, Rutgers, Penn State, Georgia Tech, Michigan, Auburn and South Carolina, just to name a few.