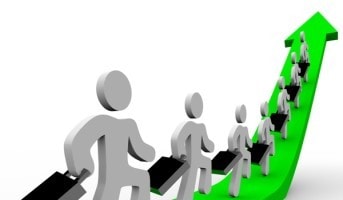 June 8, 2015 – Executive hiring prospects are increasingly optimistic with about 70 percent of employers selectively or significantly increasing executive hiring for the balance of 2015, according to the latest ‘Executive Talent Market Survey’ published by Greenwich-based Claymore Partners. Executive respondents indicated that the industries planning to hire the most in 2015 are in consulting and professional services, consumer finance / payments, health insurance, commercial banking, and healthcare. Consumer finance and commercial banking have strengthened their hiring since last year’s survey.

Executives indicated that the strongest functional areas demonstrating growth in executive hiring for 2015 are in sales, compliance & risk management, and consulting / professional services — all in line with recent trends reported by other leading executive search firms and corporate executive hiring managers.

The report found that the best sources for executive employment were networking & referrals and LinkedIn. Search firms were also ranked high. Facebook and job boards were viewed as the worst sources.

“This might help to explain why job board company TheLadders is being shopped right now,” said Hunt Scanlon Media founding chairman and CEO Scott A. Scanlon. “Several of the ‘Big Five’ executive search firms have sniffed around the company, but so far no deal.”

For employed executives, hiring opportunities are increasingly attractive and are resulting in pay and responsibility increases that have been heretofore delayed by current employers. Employed executives are also increasingly selective in what it will take to move them. And social media continues to dominate the executive hiring scene: according to the report, having a strong LinkedIn profile and maintaining industry contacts, including with executive search professionals, are the best means of seeing great new executive employment opportunities. For unemployed executives, the improved job market requires increased focus to network and to get in front of referral sources and recruiters, as well as having a strong LinkedIn profile.