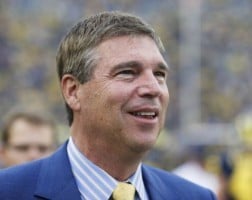 June 8, 2015 – Korn Ferry has placed David Brandon as chairman and chief executive officer of private retailer Toys “R” Us. Mr. Brandon succeeds Antonio Urcelay, who will retire. Mr. Urcelay became CEO in 2013 following the departure of Gerald Storch. Mr. Brandon is the former chairman and CEO of Domino’s Pizza where he helped usher that company through the largest initial public offering in restaurant history. He also served as president and CEO of Valassis Communications and assisted with its transition to a publicly traded company. “Dave is exactly the right leader to take the company into the future, and I am fully confident that under his excellent leadership the team will accomplish many wonderful things,” said Mr. Urcelay. “It has been an honor to lead our 66,000 team members around the world for the past two years, capping what has been a wonderful 19 years of working with this great company.”

As Toys “R” Us CEO, Mr. Brandon could receive nearly $50 million in cash after he takes over the Bain Capital Partners-backed chain next month. Mr. Brandon, a former athletic director at the University of Michigan, will receive a base salary of $3.75 million, a targeted annual bonus of $4.5 million and a one-time bonus of $4.25 million. But he could receive two payments of more than $18 million if the company achieves certain earnings targets over the next three years. Korn Ferry’s search fee has not yet been disclosed.

Wayne, NJ-based Toys “R” Us was taken private in 2005 by Bain, KKR & Co. and Vornado Trust Realty Trust in a deal valued at more than $6.5 billion. In 2013 the toy company posted holiday season revenue declines for a third straight year and abandoned a much anticipated IPO.

Mr. Brandon is said to face one of the greatest challenges of his career in rehabilitating a famous toy brand no longer viewed as important to a consumer base now focused on internet shopping. As such, Mr. Brandon is likely to focus on a complete digital transformation of Toys “R” Us.

Korn Ferry, based in Los Angeles and with a presence throughout the Americas, Asia Pacific, Europe, the Middle East and Africa, is a global provider of talent management solutions.