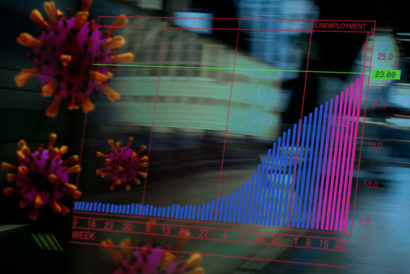 July 16, 2020 – As COVID-19 cases continue to climb across the U.S., the Labor Department reported this morning that 1.3 million more Americans filed new claims for state unemployment benefits last week, the 16th week in a row that the figure has topped one million. Economists surveyed by Bloomberg had been expecting 1.5 million claims. The latest numbers reflect the continued strain on the economy caused by a pandemic wreaking havoc around the world. Almost 50 million people have now filed for unemployment benefits over the past 16 weeks, representing the biggest jobs loss in U.S. history.

Economists at Morgan Stanley said in a note last week that the resurgence of COVID-19 cases in the southern and western parts of the U.S. “keeps us cautious on the durability of the consumer recovery in the near-term.” Even without new state and local measures, they wrote, more risk aversion and voluntary social distancing could cause the spending rebound in May and June to deteriorate.

Employment surprisingly rose by 4.8 million last month as the U.S. unemployment rate fell to 11.1 percent, according to the most recent U.S. Bureau of Labor Statistics report. These improvements in the labor market reflect a limited resumption of economic activity that had been curtailed in March, April and May due to the COVID-19 pandemic and efforts to contain it. “Data on jobless claims remains noisy at this point due to processing lags, but the fact that cumulative jobless claims over recent weeks are implying a considerably higher level of continuing claims, compared with reported continuing claims data that has been broadly flat over the past four weeks, suggests a high level of churn in the labor market continued through June,” Morgan Stanley wrote in a note.

What Executive Search Experts Are Saying

“While overall hiring is increasing, especially in those hardest hit industries, executive hiring is largely on hold currently,” said Steven Landberg, managing director of Claymore Partners. “With our focus on consulting and financial services, we have seen most organizations holding on new executive hiring for the last few months and now some of them are starting to reduce their current staffing levels with reductions in force or early retirements. They are also suggesting that they will be selectively hiring later this year in more specific areas such as healthcare, crisis management, supply chain, turnaround, and M&A consulting.”

While digital transformation remains a priority for most of the search firm’s consulting clients, “they seem to be slowing their investment levels and use of consultants in this arena other than for the top technology and stay at home service providers,” he said. “Banks have certainly slowed or stopped most executive hiring other than increasingly being focused on credit and business risk, investment banking, and workout talent. Insurers have been and continue to be hesitant to hire executives. With the challenging earning environment for 2020, we have seen organizations willing to take the cost hits for reductions in force this year and then realign their organizations for the expected operating environment for 2021.”

Unemployment Rate Falls to 11.1 Percent; Another 1.4 Million Jobless Claims Filed
As parts of the U.S. continue to reopen and COVID-19 cases continue to surge, mixed numbers on the economy are released today showing some improvements but still a ways to go for a recovery. Search experts from Wilton & Bain, The Bowerman Group, Horton, and Succession Executive Search weigh in!

“We are expecting an uptick in executive hiring in the last quarter this year and then in 2021 in consulting, banking, and insurance,” Mr. Landberg said. “Candidates are increasingly willing to look at attractive new opportunities with solid organizations and using this time to assess what they are interested in doing for the next phase of their careers. Forward thinking organizations are also taking advantage of their competitors’ misfortune and confusion to bring in top talent during this challenging time frame.”

This is increasing the importance of having a recruiter handle the hiring process,” Mr. Landberg said. “The emerging resurgence of executive hiring requires preparation, effective targeting, and a strong value proposition even more than previously.”

“One of the curious features about the executive search industry is that there are no barriers to entry, no prestigious schools from which the elite search professional can graduate with a Bachelors in Recruitment Sciences,” said Adam Pekarsky, founding partner of Pekarsky & Co. “Anyone with a phone and access to the internet can do this. Even realtors have to pass an exam! This makes the selection process of which search firm to partner with much more difficult. Inertia often results in the biggest brand winning the day. If things go sideways, the executive who hired the search firm will have a more defensible position if they hired a big brand firm (see the old adage ‘no one ever got fired for hiring IBM’).”

So what should companies look for in their search firm picking process? “The simplest answer is: Can I confidently see this individual representing my brand in the marketplace?” he said. “Will they reflect our professionalism, integrity, and core values? Do I like them as people? Would I genuinely enjoy being in their presence in a social setting? Unlike doctors or lawyers or engineers, whom you really don’t need to like in order to get competent delivery, the search business requires you to hire story tellers, who tell your story credibly, compellingly and in a manner that you yourself would be proud of. If you like your search consultants, the candidates with whom they engage with like them, too, and by extension be interested in the company that search firm represents. Other things matter, too, but they are an order of magnitude less important.”

“Even though April and May were still very slow months in terms of candidates’ reactivity, we are now seeing a surge in response rates from executives and professionals we approach for new opportunities,” Edouard Thoumyre, managing partner at Accur Recruiting Services, concluded. “Our numbers show as much as 50 percent to 75 percent increase compare to June and July or previous years.”