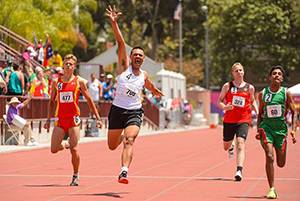 “The overall enthusiasm for the Special Olympics movement was simply remarkable,” said Mr. León. “In the end, the candidates who distinguished themselves from others in the pool were those who had career experience in both the U.S. and China. Also, while most of the candidates based in China expressed admiration for the Special Olympics and working in the social sector, many lacked non-profit experience.”

Mr. León said the search proceeded well, though it posed some stiff challenges. “We started the search in July, in coordination with our international partners, AltoPartners,” he said. AltoPartners is the global consortium of which Diversified Search is a member. “Together we built a pool, and a search strategy, that included a database of over 130 sources and potential candidates located across the United States and China.”

And though the response was positive, certain requirements of the job narrowed the number of prospects. “We anticipated that the language requirement would definitely be a challenge, both for interested candidates and the execution of search strategy, and it was,” said Mr. León. “The official language of the Special Olympics is English, but for this role, candidates were required to be fluent in both English and Mandarin. That, predictably, limited the pool. On a similar note, the 12-hour time zone difference added an additional layer of complexity during the outreach phase.”

Prospects also had to understand the finer points of both the organization and the areas for which they would be responsible. “We needed to recruit a candidate who both aligned with the unique mission-driven nature of the role, but also understood the cultural nuances needed to oversee a region comprised of six accredited programs in East Asia, and over 1.2 million athletes with intellectual disabilities,” said Mr. León. “The Special Olympics East Asia Region’s programs include China, Chinese Taipei, Hong Kong, Korea, Macau, and Mongolia. That’s a lot of geography.”

In many ways, Ms. Fung’s job history and volunteer work helped her rise above the other candidates. “Having lived and worked in both United States and Shanghai, Freda possessed a keen understanding of the dynamics of working for organizations with a strong brand and passionate culture: the Walt Disney Company and Coca-Cola,” said Mr. León. “She also possessed firsthand experience collaborating with Special Olympics East Asia as a volunteer, and through her current company’s involvement in the torch ceremony at the 2013 World Winter Games in PyeongChang, Korea.”

“Moreover, through her relationship with the former president and managing director, Mary Gu, Freda has a high regard for the SO mission and legacy that Mary forged,” he said. “You can’t understate the need to have someone show passion for the mission, and Freda did. Throughout the selection process, she demonstrated a clear understanding and zeal for SO’s goal to inspire people to reach new heights for the greater good of those with intellectual disabilities.”

Ms. Fung currently serves as partner and executive vice president of business development & alliances legal at Zera Communications in Shanghai. Before that she served for 10 years in various marketing roles with Coca-Cola and Walt Disney.

Founded in 1968 by Eunice Kennedy Shriver, Special Olympics is ranked among the world’s most admired organizations. Mary Davis, the group’s CEO, said she hoped the new alliance would result in strong long-range development of board members, executives and operations managers who will serve Special Olympics long into the future.

Mr. León specializes in board, CFO, and non-profit searches. Prior to joining Diversified Search, he was the senior director of corporate relations & programs for the Hispanic Association on Corporate Responsibility.

“As people committed to finding tomorrow’s great leaders, we have a moral duty to identify mission- and purpose-driven leaders who will have a global and personal impact beyond themselves,” said Dale Jones, president and CEO of Diversified. “At Diversified and AltoPartners, our firms’ DNA promotes the health and wellness and dignity of all of humanity.”