Menu
View our Events
Stay Connected:
With increased competition from laid-off or furloughed employees as a result of the pandemic, some areas of the gig worker market have tightened, says Carl Kutsmode of TalentRise. Yet other segments of the freelance economy are seeing scarce, in-demand talent being quickly snatched up. For many businesses, finding and attracting such individuals has become vital to survival. 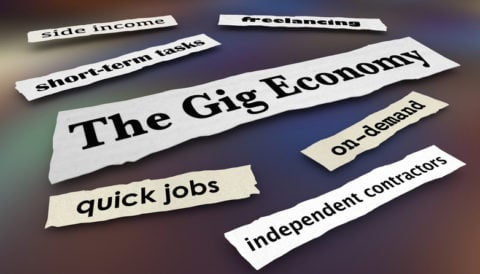 October 16, 2020 – In the months immediately preceding the coronavirus pandemic, the U.S. gig economy was stronger than ever. Beyond your typical Uber driver or Instacart deliverer, millions of Americans relied on freelance work to support their families and generate stable sources of income, according to Carl Kutsmode of TalentRise. “From marketers and graphic designers to software developers and engineers, these talented resources utilized their unique skill-sets and put them to good use,” he said.

But since the outbreak of COVID-19, Mr. Kutsmode says some areas of the gig worker market have tightened significantly, as increased competition from laid-off or furloughed employees has swamped talent pipelines across the country. “Yet in other pockets of the freelance economy, the availability of strong, niche technical resources has become somewhat scarce, as in-demand talent has been quickly snatched up,” he said.

As the nation attempts to recover from the pandemic, what does the future hold for the gig economy? Mr. Kutsmode recently served as the moderator of a STAR Chicago webinar, “The Gig is Up! Or is it?” where a panel of four industry leaders tried to answer this million-dollar question. Here are some of Mr. Kutsmode’s most significant takeaways from the discussion:

Begin to Build Your Strategic Pipeline

If your organization is reliant on gig workers with niche skill-sets, the need to construct a robust pipeline of freelancers has never been greater. Mr. Kutsmode said that regardless of service offering or vertical, companies should begin to engage with these workers and forge positive relationships with them in advance of actual need.

Carl Kutsmode is SVP, HR consulting and executive search practice leader at TalentRise. He has spent the last 20 years helping employers from startups to global organizations optimize their talent practices, processes, technologies, and strategies. A pioneer in the digital transformation of recruiting, Mr. Kutsmode helps employers gain competitive business advantage by equipping them to succeed in attracting, recruiting, and retaining the best talent.

“It is important for talent acquisition departments to have a way to track potential freelancers and know when these workers could be ready for their next assignment,” he said. “Upon identifying appropriate contract resources, employers need to strategize on how best to infuse this new talent into their workforce quickly, effectively, and with a positive candidate experience.”

For niche workers with in-demand skill-sets, these individuals will have plenty of employment opportunities available to them. So how do you position your organization to successfully attract the most qualified talent on the freelance market? According to Wade Forbes, a recent convert who joined the freelance movement after many years in a government job, he believes that this decision comes down to how gig workers are treated and what positive things have they heard about working with – and for — your company.

Organizations need to make these individuals feel appreciated and part of the team upon being hired. “The best consultants are hired for their expertise, and their reputations should come with a certain level of trust that they will get the job right,” said Mr. Kutsmode. “Rather than micromanaging their time, it is best to award these individuals the flexibility, time and resources they need to accomplish their work. By utilizing this approach, you’ll be able to maximize the contractor’s ability to achieve their project deliverables on time and within a mutually agreed-upon budget.”

The Complexity of the Freelance Market

Following the sudden loss of full-time employment due to COVID-19, both employers and salaried employees alike are entering the freelance arena for the first time. Both parties need to be aware of the dozens of nuances that exist within the market. There are many federal, state, and even company-specific rules that govern the freelance worker marketplace.

“As such, it is important for freelancers and companies to leverage gig economy experts and better understand the market,” Mr. Kutsmode said. “This can help to minimize non-compliance risk and maximize return on investment. For contractors, be sure to initiate a conversation with a tax and legal professional or utilize one of the many gig marketplace platforms such as Upwork and MBOPartners.com. These subject matter experts can help to calculate your appropriate pay rates and provide insurance and legal contracts to protect you.”

Gig Economy Continues to Grow at Blistering Speed
Working nine to five for a single employer bears little resemblance to the way a substantial share of the workforce makes a living today. Millions of people pull together various income streams and work independently, rather than in structured payroll jobs. This is hardly a new phenomenon, yet it has never been well measured in official statistics — and the resulting data gaps have prevented a clear view of a large share of labor-market activity.

John Thacker, partner at Beecher Reagan Advisors, said that the gig economy has created opportunities for individual consultants to pursue independent project work, providing them with a more flexible work schedule. “In addition, digital platforms have emerged enabling a virtual marketplace for consultants to select project work without having to source or sell that work,” he said.

For companies, attracting freelance talent is a bit different than your typical recruiting process, Mr. Kutsmode said to consider partnering with a gig marketplace or an MSP (managed service provider) to source and payroll these talent populations for you. If your organization hires a significant number of contractors directly on a 1099 or W-2 project basis, these gig market platforms and MSP providers can ensure you are protected from employer/employee government compliance audits.

Paired with an increased utilization of gig workers, Mr. Kutsmode said that companies “have also begun to redeploy their internal talent to provide them opportunities to gain new skills or career paths into new roles. In taking a high-level overview of each department, some organizations have assessed the activity and amount of work that is to be handled by each team and identified work that they would like to contract out on a project basis.”

Renee Robidieu, head of global recruiting for Land O’Lakes, for example, said that her company has shifted some of its workers away from “slower” departments by transitioning them to areas of the company that have been inundated with additional responsibilities since the outbreak of the pandemic. The company’s upper-level management was successful in avoiding laying off or furloughing Land O’Lakes employees. The strategy has been a huge win for the company, resulting in higher employee engagement, boosted morale and greater retention. To facilitate its internal gig marketplace, Land O’ Lakes is piloting a new internal mobility tool offered by PhenomPeople.

“This trend of redeployment and reskilling the workplace has begun to pick up steam in recent months and presents an effective way for organizations to appropriately realign their workforces without having to let go of any employees,” said Mr. Kutsmode.

“As the future of the gig economy remains to be seen, experts have already anticipated a rise in freelance assignments in the months – and years – ahead,” Mr. Kutsmode said. “The number of workers participating in America’s gig economy is expected to balloon to 43 percent by the end of 2020. The very nature of gig workers has proven appealing to companies who are seeking a short-term, risk-averse, cost-effective employment option during uncertain economic times.”