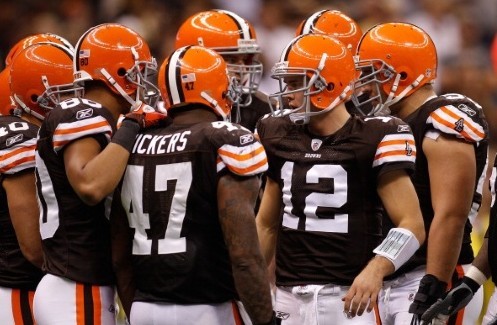 January 6, 2016 – The Cleveland Browns are the latest professional sports team using the services of an executive search firm, this time Korn Ferry, to find its next head coach. Jed Hughes, the firm’s vice chairman and global sports sector leader, is heading the assignment.

The new hire will be the 16th full time head coach in the organization’s franchise history. Mike Pettine was fired following a 3-13 season, after going 10-22 in two years and dropping 18 of his final 21 games.

The club will use a search committee made up of team owner Jimmy Haslam and his wife, Dee; executive vice president of football operations Sashi Brown; and Korn Ferry’s Mr. Hughes, who has distinguished himself as an expert in identifying, assessing, and developing leaders. His relationships in sports and intercollegiate athletics are extensive, having spent 20 years coaching in professional and intercollegiate football and working for five Hall of Fame coaches. He also led the development of psychological testing, competency development and structural behavioral interviewing for the San Francisco 49ers and Green Bay Packers.

“There are several key criteria we’re looking for in our head coach. The first is intelligence. We need somebody that’s smart. Obviously, we need somebody who’s a strong leader, somebody who is collaborative and can work well with others, a good team player,” said Mr. Haslam. “An individual that can put together a good staff, that’s incredibly important in today’s NFL, and somebody who has an intense desire to win and improve every day.”

The Browns are not the only NFL team looking for a head coach. The New York Giants, San Francisco 49ers, Philadelphia Eagles, Tennessee Titans and Miami Dolphins are also in search of new coaches. The New Orleans Saints could soon join that list.

Korn Ferry has been active filling head coaching and general manger roles for both professional and colligate sports teams. At the end of the most recent Major League Baseball season, Korn Ferry placed David Sterns as general manager of the Milwaukee Brewers.

The firm, in fact, has a history of working with MLB; it recruited Rob Manfred into the commissioner’s post last year. The league also retained Korn Ferry last year to provide league-wide talent support services, which includes assisting candidates who reach the interview process for baseball operations positions.

This past September, Korn Ferry’s Futurestep division launched a sports practice focusing on mid-level and emerging talent. Bret M. Fishkind leads the new group as a managing consultant. He had been a senior associate at Korn Ferry, where he has served as a member of the firm’s global sports practice, and its board & CEO services practice for the past seven years.