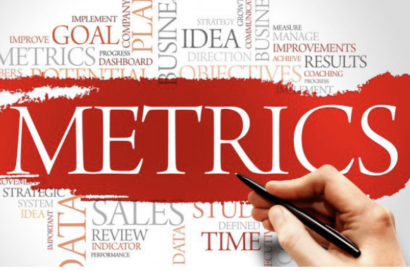 May 29, 2018 – The executive search industry’s leading 50 players in the Americas once again surpassed $3 billion in revenues last year, according to recent statistics collected by Hunt Scanlon Media. The group collectively jumped by near double digits, continuing a spectacular run for an industry that just a decade ago was left reeling from the Great Recession.

Since then, of course, a host of gravitational forces has tugged at the search sector. Back in 2008 it was LinkedIn making its presence felt; now it seems to be all about AI. Hunt Scanlon reports that while the top-end recruitment sector has been in transition for several years, it is about to enter a new phase of evolution. Adapting to the ubiquitous presence of AI and automated technologies will produce clear, and a few unexpected, winners.

Driving the latest changes will be big developments in AI – and how the new technology will alter, and advance, how search firms and their talent acquisition partners track and search for people. Korn Ferry has called in AI experts and Spencer Stuart is looking for an AI partner. For both firms, AI could provide a state-of-the-art competitive advantage. But rival boutiques that have been all the rage since the recession are also looking closely at what AI means for their businesses. They will, no doubt, be early adopters of AI technology as it comes forward.

Adoption of AI is at a very early stage, according to recruiters participating in this year’s survey. But AI and other assorted automated technologies, they said, are about to drastically alter the recruiting landscape and transform the search for talent. “We see big changes coming in how recruiters operate within this new ecosystem,” said Joseph Hanna, founder and CEO of ENGAGE Talent in Mount Pleasant, SC, which helps companies source passive talent.

Behind it all, he noted, is how best to correlate, or match, candidates with jobs. According to a just-released report from his firm, ‘A Guide to AI-Powered Recruiting,’ in the area of HR and talent acquisition, “AI and machine learning are helping organizations drive value, gain prior unconceivable data-driven insights and pinpointing what matters across sourcing, hiring, managing, developing and retaining employees.”

Survey data collected by Hunt Scanlon over the past year indicates that demand is rising quickly for greater evaluative and predictive accuracy in hunting down and then selecting global talent, along with speed. Both precision and pace, everyone seems to agree, is at the core of a dawning new search industry. These have always been the two most critical components of every recruitment lifecycle, noted a number of recruiters, but AI is a potential new mechanism in helping them pull it all together.

To be sure, what AI presents is limitless in how the search sector will come to reimagine how it organizes, communicates with, recruits, develops, manages, engages with and retains talent for clients. And there have been two schools of thought around AI. One is that AI will eliminate the need for human recruiters in the search process – which will instead rely on bots and robots to search for and recruit talent. The other is that AI will simply empower the recruiting sector, giving it new tools to bolster its arsenal of capabilities and services. Recruiters seems to overwhelmingly believe that school of thought. AI, ultimately, will affect each and every recruiter in how they source talent – but it is a fundamentally positive change for the recruiting sector.

Clarke Murphy, chief executive of Russell Reynolds Associates, concurred. “It is undeniable that machine learning and algorithms have amazing power in any industry,” he said. “However, automated tasks need to be balanced with a human understanding of how executives fit an organizational culture, and how their behavioral track records might equip an organization for a changing world. Our clients want our data and our judgment, not just one or the other.”

Not surprisingly, it all comes down to Big Data management. “Digital transformation has been – and continues to be – a hot topic,” said Rick DeRose, co-founder and managing partner of executive search firm Acertitude. “It presents one of the biggest opportunities for businesses to reimagine how they organize, recruit, develop, manage, engage and retain talent.” And this is, he said, especially true for executive search firms.

“Leveraging Big Data to compute descriptive, predictive or prescriptive analytics helps leaders better understand their companies and make competitive moves,” Mr. DeRose said. “We’re seeing an explosion of recruitment technology capabilities built on these algorithms, from identifying people based on specific requirements to determining how open someone is to a career change to using video to analyze honesty and character.” But at Acertitude – and at its recruitment rivals – there continues to be the need to balance a hands-on, ‘human’ approach with these data-driven tools and assessments.

By most measures, it was an exceptional year of expansion for executive recruiters plying their trade across the C-suite – not only in the Americas, but around the world. A number of search firms and global recruiting consortiums enjoyed double digit growth in the latest rankings, while others seemed to take a slight breather from that sort of surge in business enjoyed over the past several years.

A quick glance down the percent change column of this year’s top 50 rankings table shows, for the most part, an extraordinary story of growth. While growth rates among the top 10 search firms increased by just 5.2 percent – about half the rate over the previous year – the real action took place among the boutiques. Among this group, 19 reported double digit growth rates (versus 17 firms in last year’s rankings), and of those, seven enjoyed growth rates of 30 percent or more. These include: True Search (+43%); Marlin Hawk (+38 percent); Koya Leadership Partners (+35%); CarterBaldwin (+33.9%); ZRG Partners (+31.7%); TalentRise (+31.2%); and Howard Fischer Associates (+30.9%). Overall, the top 50 were up nearly eight percent.

Joe Riggione, co-CEO of True Search – awarded the distinction as ‘fastest growing’ search firm of the year, attributed just 14 percent of his firm’s spectacular growth to new partner headcount compared to the prior year. The other roughly 30 percent remaining growth, he said, represented higher revenue per partner which, in the consulting sector, means higher productivity. This increased efficiency was due to new client acquisitions, particularly in private equity and among public entities which are less fee sensitive, and deeper penetration in some of the firm’s established clients.

An analysis of global revenue performance among the industry’s Big Five showed, collectively, 5.4 percent growth, with revenues gaining by some $218 million to $4.24 billion. The pecking order among this group remained unchanged, though Russell Reynolds Associates showed the biggest gains at 8.6 percent. This was followed by Korn Ferry, Heidrick & Struggles, Egon Zehnder and Spencer Stuart.

“It was a strong year for the industry overall and we were the beneficiaries of a stronger-than-expected European performance,” said Mr. Murphy, the Russell Reynolds’ CEO. “Our success also reflects the fact that our clients are increasingly asking for our involvement in their boardrooms, with succession planning and other leadership challenges they face.” About 55 percent of Russell Reynolds’ business stemmed from the Americas in 2017, and that was enough to edge out its nearest rival, Egon Zehnder, for fourth place on the Americas ranking table.

For its part, Korn Ferry is settling into a new rhythm now, post its Hay Group acquisition. Compared to its nearest Big Five rivals, Korn Ferry has moved to compete much more broadly in organizational consulting, backed by an army of 7,000 global colleagues. “We help companies design their organization,” said CEO Gary Burnison, and that includes the structure, the roles and responsibilities, as well as how these companies compensate, develop and motivate people,” he said. 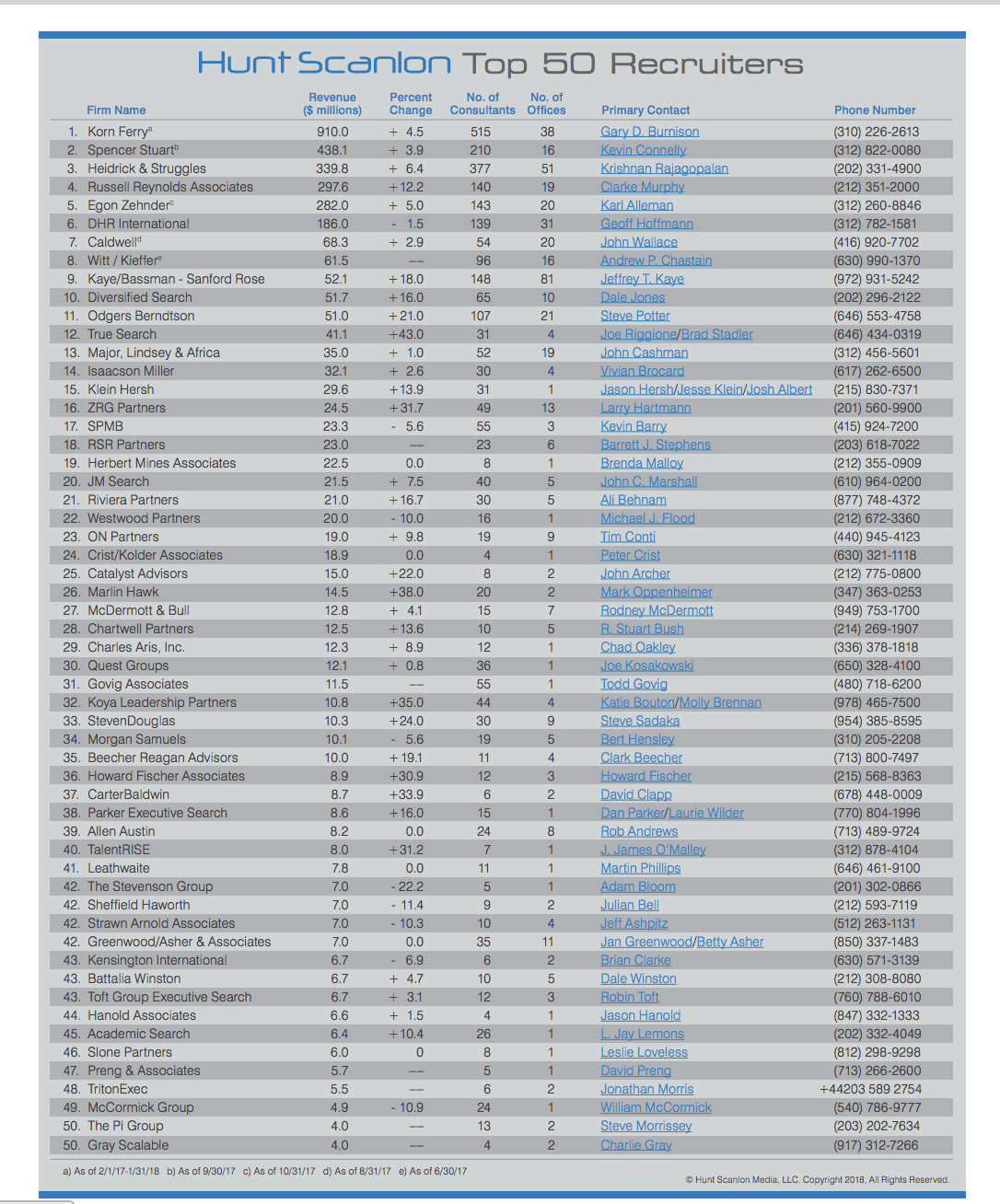 Korn Ferry today works with 93 companies among the Fortune 100. About 100,000 professionals are developed in its leadership programs each month. It maintains rewards data on some 20 million workers, management data pours in from 110 countries and it has engagement data on six million professionals. Roughly 53.5 percent of its global business now emanates from the Americas region.

The other publicly-held Big Five search firm, Heidrick & Struggles, posted global revenues of $621.4 million in 2017, a 6.7 percent increase from revenues of $582.4 million the year before. But the Chicago-headquartered recruiter – the fourth largest globally – reported a loss of nearly $50 million on the year. Krishnan Rajagopalan, president and CEO, said the firm has made significant strides in lowering the run rate of its general and administrative & business support expenses – actions, he noted, that would allow it to shift the focus of its capital to investments that support growth while helping it achieve improved operating margins on a more sustainable basis in 2018. About 55 percent of its global business now comes from the Americas region.

At privately-held Spencer Stuart, the firm retained its status as the No. 2 ranked search firm in both the Americas region and globally – edging out Egon Zehnder on one list and Heidrick on another. It reported positive gains on both rankings this year, after posting negative growth on each the previous reporting period. “Expect revenue growth,” the firm said, “due to broad based strength across all regions and most major industry practices and leadership assessment services.” About 62 percent of its global business now comes from the Americas region.

Egon Zehnder, the No. 3 ranked global search firm and also privately-held, said it continued to broaden its leadership solutions offerings in 2017, resulting in double-digit growth in leadership advisory revenues. That consulting segment is a business that remains clearly in the crosshairs of all of the firm’s top rivals in 2018. In addition to executive search and board advisory consulting, Zehnder’s service portfolio now encompasses executive assessment, leadership development, team effectiveness, and cultural and organizational transformation. About 42 percent of its global business flows from the Americas region.

But as in past years, the biggest growth and expansion taking place is happening among the boutique search firms. That has been the most consistent trend to develop since the Great Recession 10 years ago. 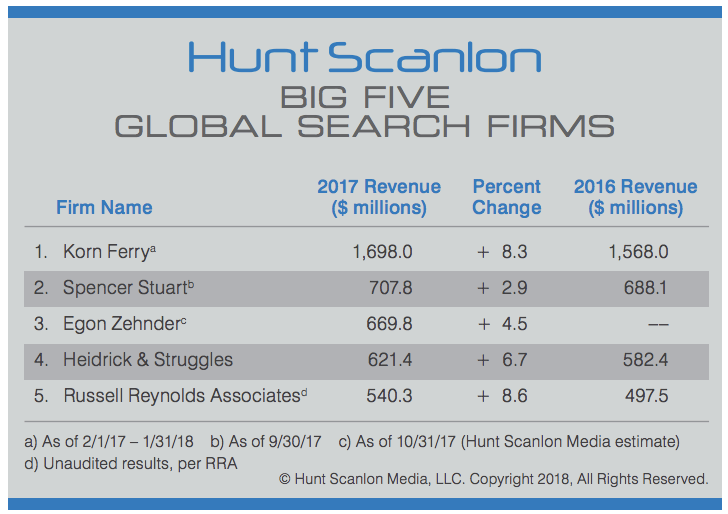