Menu
View our Events
Stay Connected:
Given the speed at which market conditions, business strategies, and operational structures have changed in recent years, businesses are more aware than ever of the crucial role the chief financial officer plays in shaping and driving a company’s strategic direction. A just-released report by BoardEx of ‘The Role of the CFO 2022’ examines more than 1,400 CFOs who lead major publicly traded companies across 16 countries around the world. Let’s take a closer look. 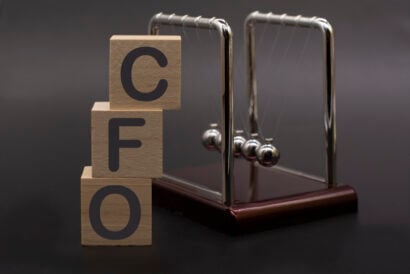 April 6, 2022 – Amid elevated geopolitical uncertainty, digital disruption, heightened trade frictions, shifting cultural attitudes, more polarized social divisions and a pandemic, corporate leadership teams have had to adapt to rapidly changing market conditions, business strategies, and operational structures in recent years. This has made a significant impact on the role of the CFO, according to ‘The Role of the CFO 2022’, the latest report from BoardEx.

In many companies, an underlying shift in the CFO role from a predominantly finance-based focus to one encompassing broader strategic oversight has been underway for some time, the report found. “The fundamentals of cost control, cash flow management, risk assessment, and financial reporting remain as critical as ever,” the study said. “However, these functions now often sit alongside other responsibilities, such as digital transformation, talent development, outsourcing procedures, enterprise innovation, and investment planning. The parameters of the modern CFO role are broader and more diverse than ever as CFOs become involved in the formulation and execution of commercial, technological, and financial business strategies.”

In many cases, the pandemic will have accelerated this process, with the related surge in digital connectivity, structural shifts in consumer demand and protracted disruption to business supply chains requiring an effective CFO to have a deep understanding of all facets of the company as well as wider societal, technological and regulatory trends. The BoardEx report notes that all of this serves to emphasize the importance and responsibility of the modern CFO in shaping and driving a company’s strategic direction, while also ensuring operational resilience in an often uncertain economic environment and rapidly evolving digital space. “This, in turn, demonstrates how crucial it is for businesses to recruit and retain the right talent in finance leadership, aligning an individual’s capabilities and expertise with not only the situational demands of the senior role but also the expectations, constraints and culture of the organization,” the report said.

With all the challenges the role entails, a defining trait is the skill-set and experience of a CFO – and this will be unique to each individual, according to BoardEx. For some, this might be corporate action experience, such as mergers and acquisitions, taking a company though an IPO or driving a private-equity-owned portfolio company towards and through a successful exit. Others, meanwhile, may have accrued a wealth of experience in leading roles at a wide range of organizations, including both publicly held and privately owned companies.

Along with their skill-sets and experience, the report notes that a CFO also brings valuable connections to the company they help to lead, and the significance of these is often overlooked. “CFOs are invariably well connected to large numbers of senior business decision-makers, including board members and C-suite executives, chairpersons, committee members, and others,” the BoardEx report said. “These networks of connections are powerful and can be leveraged for a range of activities, notably business development but also recruitment and due diligence (for example, a CFO’s networks can be used to find a warm introduction to a relevant executive at a potential target company).”

In fact, the average current S&P 500 CFO has accumulated at least 1,400 first-degree connections to such decision-makers over the course of their professional career. And these executives’ second-degree connections are even greater in number – averaging 262,500 individuals in leadership positions – making the CFO a highly valuable source of commercial opportunities.

Having acknowledged the increasingly complex array of financial, commercial, digital, and strategic challenges the modern CFO has to navigate, BoardEx highlight key characteristics of today’s global CFOs at major listed companies in the context of their own peer group.

Related: As CFOs Gain in Stature, Succession Plans to Replace Them Falter

On average, the report found that CFOs at major listed companies are in their early to mid-50s. The age profile is similar in most leading markets, where the average is in a fairly narrow range of 52 to 55 years, but there are several outliers. Leading CFOs in Russia are, on average, six years younger than their global counterparts, with those in Brazil also under age 50. Most leading CFOs have more than 20 years of previous experience in a corporate environment upon assuming their current role, underlining the seniority, responsibility, and strategic importance that the position commands. However, there are clear differences across major markets. Professional experience of around 28 years is the norm in Japan, France, and the U.S., which is five years longer than in other large European and North American markets.

The vast majority of CFOs at listed companies are men, the BoardEx report found. Across major European and North American markets, the proportion of female CFOs is, on average, around 15 percent. The share is somewhat higher in Spain and slightly lower in Italy and France. Mirroring the pattern for most senior executive roles, there has been a narrowing of the gender imbalance over the past decade, albeit only a gradual one. Widening the country net reveals more acute variations in female CFO representation, ranging from less than five percent in Japan, and India to almost 30 percent in South Africa, Australia, and Singapore.

For all the hardship that the pandemic has created for companies everywhere, there are valuable lessons to be learned, especially for chief financial offers, says a new report from Tatum. Brad Bauer, vice president with the firm, recently sat down with Hunt Scanlon Media to discuss how CFOs are meeting perhaps the greatest challenge of their careers.

Diving deeper into gender representation by industry, BoardEx found that in the U.S. there is an above-average share of female CFOs in listed companies in the IT, healthcare, and leisure and hotel industries, which are all expanding sectors of a modern economy. This contrasts with underrepresentation in finance, business services, and utilities. There is a broadly similar pattern among listed companies in the U.K., with the exception of a higher proportion of female CFOs in financial services and general retail.

Across the major European and North American countries, the BoardEx report found that CFOs at major listed companies have, on average, been in their current position for four years so far. “Indeed, it is striking how similar the average CFO tenure (so far) is in the four markets of the U.S., Canada, the U.K., and Germany,” it found. “An outlier among the group is Spain, where the average duration so far is more than six years. Broadening the scope to include Asia, Japan again stands out with an average tenure of just 2.1 years. This is despite Japanese CFOs generally having more years of previous experience than finance leaders in other countries, but a prevalence for more restructuring among boards than in other countries may explain the lower number.”

Internal appointments and external hires are evenly split among current CFOs at listed companies in the U.S., according to the BoardEx report. “In large listed firms there is often a considerable stock of internal talent to select from, and their knowledge of the organization’s strengths and weaknesses can be invaluable for the CFO role,” the study said. “At the same time, the high-profile and increasingly diversified nature of the position means most firms are also keen to look externally to recruit from the widest possible talent pool. In some cases, this can be with the specific aim of bringing in a CFO from outside the business to broaden the skills and experience at senior executive level and offer new strategic thought.” Among other leading markets, there is a slight leaning towards external CFO hires in Canada and the U.K., with internal promotions somewhat more common in Germany and France. The overall picture is of a fairly balanced distribution, with the exception of Italy, where just over two-thirds of current CFOs have been external appointments.

External CFO hires are predominantly brought in from a different sector, the report found. This is the case for all seven leading markets in North America and Europe, implying that moving sectors is fairly common. BoardEx found that two-thirds of external CFO appointees at major listed companies in the U.S. moved from another industry, while this share is about 80 percent in France and Italy. It is worth noting, however, that relevant sector experience at an earlier stage of an appointee’s career is quite common. In the U.S., around half of external CFO hires who moved from a different industry had, at some stage in the preceding 15 years, worked in their current sector. This share rises to two-thirds among leading CFOs in Canada and Germany, while it is less commonplace in the U.K.