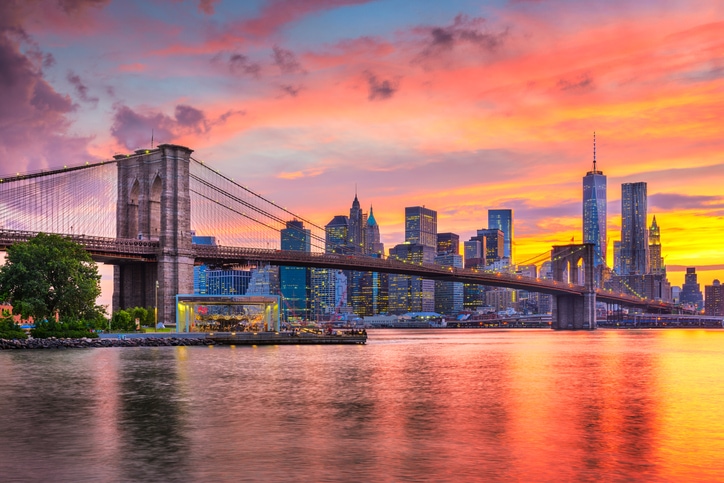 October 29, 2020 – Steven B. Potter, managing partner of Odgers Berndtson in New York, has spent over two decades as a founder, CEO and senior executive of several financial services executive search firms, all based in midtown Manhattan. Mr. Potter recently sat down with Hunt Scanlon Media to discuss how the business climate has changed in New York City since the COVID-19 pandemic started. He shares his views on what this market will look like moving forward as many New Yorkers continue to adapt to working from home. And he discusses the importance of innovation and reinvention alongside a constantly shifting and evolving market.

Steve, New York City is the epicenter of global executive recruiting. Discuss some of the changes you see happening in the market since the pandemic began seven months ago.

New York was severely impacted by the pandemic, and the city has a long way to go before it gets back to normal. Most offices are still closed; an unheard of five percent of apartments are now vacant; and there’s rising concern about the safety, cleanliness and quality of life in the city. These factors, combined with the fact that most companies have found remote work far more efficient than expected, have made NYC-based companies less desperate to return to the office. But there will be a return in some form or another. New York isn’t going to stop being New York; it will just be a little different.

Is remote working shrinking the market?

New York City’s size – its diverse array of companies and talent – has been its biggest asset for centuries. Maintaining a presence in New York gives companies access to the largest talent geography in North America. But remote work has the power to change this paradigm, because when companies adopt remote or semi-remote employee structures, they suddenly have access to a far wider talent pool. Now, employees can be based in Pittsburgh or the Berkshires or a bungalow in the Virgin Islands. So, the city’s future, as I see it, depends largely on how many companies pivot to remote work. If it’s just a few tech companies doing it, New York’s isn’t going to change much; but if the majority of major companies in any given industry go remote, we’ll see upper-level employees moving out of the city and its suburbs, and this may have real implications for the region’s talent market and underlying economics. That said, I suspect that, for most companies, a fully remote model is unrealistic. It is hard to build relationships, meet new clients and oversee acquisitions without seeing people in person. So, I think most companies will opt for a fusion of in-office and remote work, and as evidence I would point to the rising real estate prices at the outer edge of the New York’s commute range.

How has this changed the housing market in the New York suburbs?

The semi-rural housing markets in western Massachusetts, northern Connecticut, eastern Long Island and northwestern New Jersey are on fire right now, which to me implies that talented professionals are expecting to spend a day or two in their offices in the city and the rest of the week working from home in the country. If this turns out to be true, it will have a significant effect on the commercial and residential real estate market in New York. On the commercial side, it will lead to different workspace configurations and smaller footprints for companies. On the residential side, it may finally depress apartment prices and make the city a more affordable place for people to live. 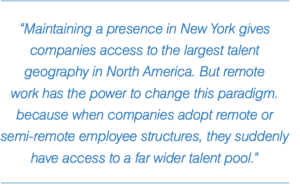 What are some of the biggest changes to come?

When I was a younger recruiter, I thought nothing of flying halfway across the country to have lunch with someone, but I don’t think recruiters – or sales managers or just about anyone – will do that anymore. Companies are realizing they can drastically cut travel budgets – and increase employee productivity – by hosting all but the most important meetings on Zoom or a similar platform. This will certainly impact the airline industry, and even the restaurant industry in places like New York, but it’s going to save employees a lot of time and lower their stress levels. On another note, companies have a wider understanding of, and healthier respect for, external risks, whether they derive from pandemics or geopolitics. As a result, I think we will see a proliferation of new risk-mitigating functions in companies. Odgers Berndtson’s healthcare practice, for example, is predicting a huge uptick in workforce health officers whose role will be to integrate health considerations into a company’s operational structures. I also think that the supply chain problems that companies experienced in the early days of the pandemic have demonstrated the risks inherent to globalized supply chains. Companies will take steps to offset these risks. They may, for example, destigmatize the idea of surplus, especially when it comes to crucial materials – e.g. minerals and metals – that can be sourced from only one location. This isn’t the first time we’re going to see regional shutdowns from a virus event. And next time it happens, some companies will be prepared.

Since the start of the pandemic have you seen clients delaying or pausing search assignments?

There have been different phases. We saw a pause from early April to May, but almost all of our searches restarted after that. Certain industries like education and healthcare (the latter of which saw three months of revenue loss) have been especially hurt by the pandemic, so there’s not a lot of activity in these industries; they’re not delaying searches so much as not starting them in the first place. 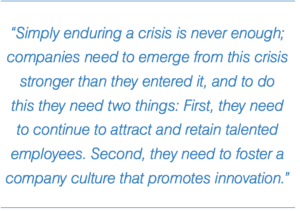 How have you adapted?

When it comes to remote hiring, we have seen a big difference between verticals. We have closed a few C-level searches entirely on Zoom, but most CEO and C-suite searches still require in-person meetings between the finalist candidates and the client. With the C-minus-one level, however, remote completions are far more common and, in some industries, may become the norm. As far as our firm’s operations go, Odgers Berndtson’s philosophy is that we’ve got to keep on innovating and trying new things, especially if there’s a chance that our competitors are sitting still. We have broadened our offerings in major ways and opened four new lines of business this year. Our interim business (Odgers Interim) and our mid-market business (the Berwick Group) were announced this summer, but you’ll have to wait on news of the other two; they’ll be announced shortly

What would you like to say to your clients about weathering the storm?

Simply enduring a crisis is never enough; companies need to emerge from this crisis stronger than they entered it, and to do this they need two things: First, they need to continue to attract and retain talented employees. Second, they need to foster a company culture that promotes innovation. The bankruptcies we’ve seen in the COVID era are rarely the pandemic’s fault alone; in most cases, there was an existing weakness in the company that made it vulnerable to the economy-wide disruption we’ve seen in the last few months. This weakness generally comes from their failure to innovate, and their failure to reinvent themselves alongside the constantly evolving market.