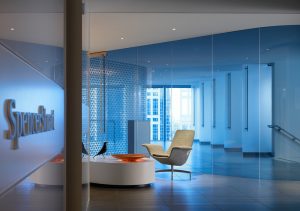 June 9, 2016 – Executive search firm Spencer Stuart has placed Kim Keck as president and chief executive officer of Blue Cross & Blue Shield of Rhode Island. She will be the seventh president and CEO of the 77-year old company and succeeds Peter Andruszkiewicz who is retiring.

Ms. Keck, a seasoned veteran of the health insurance industry, was with Aetna for more than 25 years. Most recently, she has been engaged in integration planning in connection with Aetna’s anticipated acquisition of Humana.

During her tenure at Aetna, she held various leadership roles in the company, including president of the northeast region, interim president of the southeast region, head of enterprise strategy and mergers and acquisitions integration, and vice president of finance. She also served as the chief of staff to Aetna’s former chairman, CEO and president, Ronald A. Williams.

“Kim’s strong industry experience, leadership skills and strategic thinking made her the clear choice as Blue Cross & Blue Shield of Rhode Island’s next president and CEO,” said Randy Wyrofsky, chairman of the board. “Kim fully supports our mission to provide Rhode Islanders with access to affordable, high quality healthcare. Her ability to build relationships and plan for the future will help position Blue Cross for continued growth and long-term success.”

“The search for Blue Cross & Blue Shield of Rhode Island’s next president and CEO was a methodical and thoughtful process,” said John Maguire, vice chair of the board and chair of the search committee. “Working with a national search firm, Spencer Stuart, the board was able to identify the best possible pool of qualified candidates. We are delighted that someone of Kim’s character and experience will succeed Peter as president and CEO.” Blue Cross & Blue Shield of Rhode Island is the state’s largest health insurer and covers more than 450,000 members.

During the past three years, Spencer Stuart has conducted more than 400 C-level executive and board director assignments for healthcare services organizations as well as searches for scientific and clinical leaders, and functional executives in finance, HR, information technology and sales & marketing. The firm has worked with nine of the top 10 health plans and conducted C-level, dean, department chair or division chief searches at more than half of the top-tier academic health science centers.